BY Amanda Austin on May 12, 2014 | Comments: one comment
Related : Recap, Television, The Blacklist 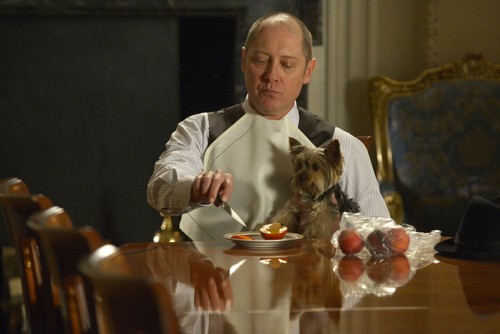 Tonight on NBC their new criminal drama, THE BLACKLIST starring James Spader continues with a new episode called, “Berlin: Conclusion.” On tonight’s episode Part 2 of 2, In the Season 1 finale, authorities pursue prisoners who are on the run after their transport plane crashes. Liz hopes to enlist Red to help track down all the escapees, particularly the mysterious prisoner Berlin.

On last week’s episode Liz at the end of her rope, realized she can’t trust anyone – Liz (Megan Boone) refused to work with Red (James Spader) after discovering the truth about the death of her father. Seeking to make amends and force Liz to see him, Red brought the FBI a case they can’t ignore. Meanwhile, Liz revealed what she knows about Tom’s (Ryan Eggold) secret life to the FBI. Diego Klattenhoff, Harry Lennix, and Parminder Nagra also starred.  Di you watch last week’s episode?  If you missed it we have a full and detailed recap, right here for your enjoyment.

On tonight’s episode With the crashing of the mysterious prisoner transport plane, the city is on lock down as the authorities are on the hunt for all the escapees. Meanwhile, with Red (James Spader) in custody, Liz (Megan Boone) uses her power to get him out since he is their best chance at finding all the suspects. Elsewhere, their main objective is to track down Berlin, a prisoner on the plane who is somehow involved. Diego Klattenhoff, Ryan Eggold, Harry Lennix and Parminder Nagra also star.

With the crashing of the mysterious prisoner transport plane, the city is on lock down as the authorities are on the hunt for all the escapees. Meanwhile, with Red (James Spader) in custody, Liz (Megan Boone) uses her power to get him out since he is their best chance at finding all the suspects. Elsewhere, their main objective is to track down Berlin, a prisoner on the plane who is somehow involved. Diego Klattenhoff, Ryan Eggold, Harry Lennix and Parminder Nagra also star.

Tonight’s season finale of The Blacklist picks up where we left off last week, the plane transporting Berlin has crashed outside of the city on the banks of the East River.
Meanwhile the FBI has taken Reddington in to custody. They handcuff him in a cell in the basement of a building. The agents informs Reddington he “doesn’t have to worry about immunity because he is going to disappear.”

Liz and her team are investigating the plane crash, which is a prison transport. It was originally a transfer flight, and they realize the flight plan was bogus. Now, they have a plane full of injured foreign criminals. All of the prisoners on the plane are brought into questioning, however three are at large. None of the men know what Berlin looks like, he says he was wearing a hood over his head.

Tom pays a man (most likely Berlin) a visit, he asks him “what the hell happened” in reference to the plane crash. Tom hand him a list of names which includes: Elizabeth, Ressler, Harold, Meera, and Aram.

Fitch pays Reddington a visit in his secret prison cell, and demands Red fill him in on the plane crash. He wants to know where the plan originated from and if it is “related to Reddington’s nemesis.” Fitch arranges a transfer for him, and Red tells him he can “handle the rest.”

Reddington manages to escape during the transfer, and the first thing he does is call Lizzie and tell her that she and her team are in danger. Ressler and Meera are currently at a dance club where they received a tip that the prisoners form the plane crash may be hiding out. Ressler heads upstairs in the dark club and finds one of the suspects and gets into a brawl with him, meanwhile Meera is walking around the downstairs of the dark club. A man sneaks up behind her and slits her throat and keeps walking. Meera is dead.

Elizabeth heads to Reddington and demands to know why her team is in danger and how her father was a part of this. Reddington informs her right now their task is to “identify the enemy today,” and find out who “put the prisoners on the plane and where they were being taken.”

Reddington pays the Russian Ambassador a visit, and demands he turns over the manifest of the Russian plane that they are currently pulling out of the river. After some pressure and a knife in the leg, the Ambassador hands over the plane’s manifest. They get names and mugshots of all of the passengers, and now they have photos of the three convicts that are still at large. They know one of the guys in the pictures has to be Berlin. They head to the hospital to question one of the surviving guards from the plane, he informs them that “the man they are looking for isn’t in the photos and he was never on the manifest.”

After a meeting in the park Harold hops in to his car and realizes his driver’s neck has been slit. A man climbs over the back seat and chokes him as well. Berlin watches from the park bench, and crossed his name off his hit list. After Harold’s near death they track down his and Meera’s killer. Ressler chokes him in the interrogation room and he gives up Berlin. They now have Berlin’s real name and photo.

Liz climbs into a car with Reddington and again questions him about Sam’s role in the Berlin case. Reddington informs her that he killed Sam to protect Liz, because he wanted to tell her who her father was. And, Red believes if she knew the truth about her real Dad it would put her in grave danger.

Fitch pulls some strings and accesses intelligence and is able to track down Berlin’s location. He calls Reddington with the address, and Reddington head to his apartment solo. He barges in with a gun and Berlin looks shocked, and unarmed. Reddington ties him up in a chair and demands to know why Berlin is trying to take him out. He asks Berlin “Who in God’s Green Earth are you?” Berlin spits in his face. So Reddington shoots him in the hand.
Meanwhile Liz is sitting in her car, and Tom climbs in with a gun pointed at her, she is shocked and unprepared. He points the gun at her and says “Hi Babe.”

After three more gun shot wounds Berlin finally screams that he knows Reddington from “Beirut 2010.” Reddington stares at him for a moment and then Tom barges in the door dragging Liz with a gun pointed to her head. Berlin screams at Tom to “kill them.” Berlin begins screaming more and Reddington shoots him in the head and kills him. Elizabeth manages to break free from Tom and shoots him in the stomach with his own gun three times. She tells Reddington to leave and says she will “finish Tom off.” After Reddington leaves Tom whispers something in her ear.

She heads back to the office thinking that the case is closed and Berlin is dead. Amir makes a sudden discovery while going over the manifest and mughosts as they are putting away the files. He realizes that they misidentified some of the prisoners, and the guard they spoke to in the hospital actually cut off his own hand and he is Berlin. They rush to the hospital, however the guard has escaped already. Liz rushes to Reddington and tells him that Berlin is still out there, but Reddington already knows. He says he knew that man he shot wasn’t Berlin, because he said he met him in 2010 and Berlin was attacking him long before 2010.

Reddington asks Liz if she wants to keep working with him, and she declines. He tells her he will catch the next plane. As he is preparing to leave, Liz shows up and stops him, she confesses to him that right before Tom died he told her that her father is alive. Reddington reassures her that her father died that night in the fire.

Berlin takes a photo of a young girl out of his pocket watch and stares at it for a moment as he is walking down the street. Reddington heads home and stares at the same identical photo of the little girl. He takes his shirt off as he is getting ready for bed and reveals burn scars covering his back.