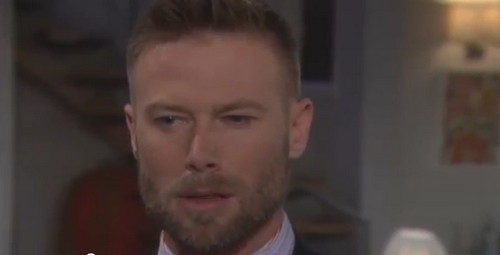 The Bold and the Beautiful spoilers tease that the Tuesday December 16 episode of the CBS soap will be packed full of soapy drama, and rumor has it B&B fans will not want to miss a second! Bold and the Beautiful spoilers have been teasing a possible reconciliation between Bill Spencer and his ex-wife Katie for a few weeks now – and in the all new sneak peek spoiler video for December 16 it looks like Bill is going for it!

Tuesday’s Bold and the Beautiful spoiler video features a heartfelt conversation between Bill and Katie, and he appears to be begging his skeptical ex-wife to give them another chance. In the all new B&B promo video Bill holds Katie and reveals, “I want a chance Katie, I want a chance to make things right. We were great together, and we could be great together again.” Katie doesn’t seem to be buying it though, and she asks her baby-daddy where all of this is coming from.

In other Bold and the Beautiful news, Rick Forrester continues to scheme and carry out his rouse that he is happily married to Caroline and has forgiven her for making out with his brother Ridge. When, in all actuality it is all an act and he just wants to make sure he secures his position as CEO before he kicks Caroline to the curb. In the Bold and the Beautiful spoiler video for December 16th, Rick urges his father Eric to sign what looks like a contract and informs him that he can “show him by signing the papers.” It looks like Rick is just trying to finalize his position as CEO, and is encouraging his father to make it official.

So B&B fans, what do you think of Bill and Katie getting back together? Should she be with him or Ridge? Do you think that Bill deserves another chance? How do you feel about Rick lately, is he going a little overboard or do you like this new villain side of him? Let us know what you think in the comments below and don’t forget to check CDL tomorrow for more Bold and the Beautiful spoilers, polls and news.