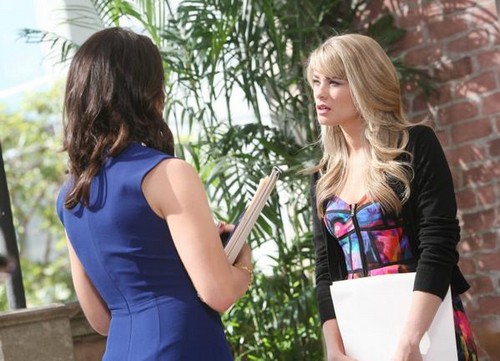 The Bold and the Beautiful spoilers tease another dramatic week of soapy episodes during November 10-14. Rumor has it that a huge blow up occurs between Ridge and Bill Spencer (Don Diamont). B&B spoilers reveal that Katie (Heather Tom) confides in Bill about Ridge and Caroline’s hot make-out sessions at Forrester Creations and Bill goes through the roof. Fans can expect a fiery confrontation between Bill and Ridge when Bill learns that Ridge was trying to seduce his niece Caroline.

Fresh off the news that Kim Matula is quitting Bold and the Beautiful, Bold and the Beautiful spoilers tease that Liam, Ivy, Hope, and Wyatt’s trip to Amsterdam goes awry. After meddlesome Quinn (Rena Sofer) pressures Wyatt to push Liam and Ivy together, Hope overhears Wyatt on the phone making plans for a romantic boat trip. You can imagine Hope’s surprise when she learns the trip isn’t for her and Wyatt, but for Liam and Ivy.

While Wyatt (Darin Brooks) is busy following in his mother’s footsteps, his wife, Hope, and Liam reportedly share a close moment and question whether they are really over each other. Spoilers also tease that Ivy and Hope have a few words with each other in Amsterdam, but they put their issues aside for a photo shoot on November 12th.

Back at Forrester Creations, Maya begins to reap the benefits of hooking up with the company’s CEO. However, according to Bold and the Beautiful spoilers, Caroline (Linsey Godfrey) is not ready to give up on her marriage and continues to try and get through to her angry hubby Rick.

So, B&B fans, does Bill have a right to be furious with Ridge, or should he mind his own business? How angry will Hope be when she realizes that Wyatt is trying to create some sparks between Liam and Ivy? Do you think Liam and Hope (Kim Matula) will wind up back together? Will Rick forgive Caroline? Let us know what you think in the comments below and don’t forget to check CDL tomorrow for more Bold and the Beautiful spoilers and news.