The Bold and the Beautiful Spoilers: Ivy Has Had Enough Of Hope, Taylor Visits Eric Forrester, Hope Still Loves Liam

BY Amanda Austin on November 11, 2014 | Comments: 2 comments
Related : Spoiler, Television, The Bold and the Beautiful 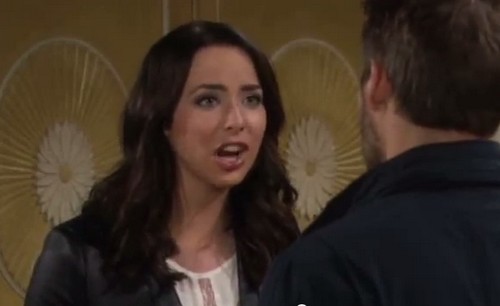 The Bold and the Beautiful spoilers tease that the Wednesday November 12 episode of the CBS soap will be a tough one for fans of Wyatt to watch, because it looks like Hope is headed back to Team Liam. When Bold and the Beautiful spoilers revealed that Hope, Wyatt, Liam, and Ivy were all headed to Amsterdam, we all knew it was only a matter of time before everything on their trip went to hell. And, according to the B&B spoiler video for tomorrow’s episode – the inevitable has finally happened.

In an all new Bold and the Beautiful spoiler video for November 12, Ivy is not happy and rants to Liam about Hope. Ivy reminds him, “She’s married to Wyatt, she’s carrying his child. She has to let go of you eventually.” Hope apparently has no intention of letting go of Liam any time soon though, and in the B&B promo Wyatt’s wife announces, “I’m not okay with any of this,” to Liam. It must be nice to be Hope Logan and stake a claim in not one, but two Spencer brothers. Regardless, it is all really irrelevant because it was just announced last week that Kim Matula is exiting the CBS soap and they will not be recasting the character.

In other Bold and the Beautiful news, Taylor Hayes is back in town – and she pays her old lover Eric Forrester a visit. In the promo video for the November 12 episode Eric catches Taylor up on all the Forrester Creations drama, and Taylor is upset that Hope married Wyatt and is pregnant with his child. Although, we don’t really understand what business that is of Taylor’s or why she would be so upset?

So B&B fans, what do you think of Hope’s wishy washy behavior in Amsterdam? Does she actually what Liam, or does she just not want ivy to have Liam? Do you think Liam will drop Ivy like a bad habit if Hope wants to get back together with him? Let us know what you think in the comments below and don’t forget to check CDL tomorrow for more Bold and the Beautiful spoilers.