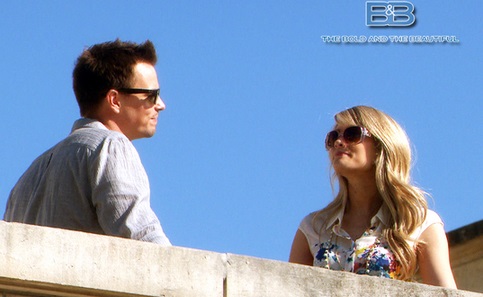 The Bold and the Beautiful spoilers tease a week of must see drama during the week of August 11th-15th. On Monday the CBS soap opera will pick back up in Paris, Liam is racing to see Hope, but Wyatt’s crazy mom Quinn is determined to make sure he doesn’t get to her. While Quinn is doing everything possible to delay Liam from arriving, Wyatt continues to work on Hope and makes one last ditch attempt to win her back from his half-brother.

According to B&B spoilers, pushing Ivy in to the river was just the beginning of Quinn’s Parisian reign of terror, and on Monday August 11th Hope goes missing. Deacon and Brooke become frantic back home when they realize their daughter is MIA in Europe, and no one has heard from her. Rumor has it Quinn is responsible Hope’s disappearance.

Bold and the Beautiful spoilers for the week of August 11th also tease that Hope’s dad Deacon decides to take down Quinn on his own, when he realizes that she is still meddling with Hope’s love life. Deacon does some junior detective work, and searches for evidence that proves Quinn is responsible for Ricardo Montemayor’s death. According to B&B spoilers, on Friday August 15th Deacon confronts Quinn and accuses her of murder!

Deacon and Brooke may be bonding over their daughter’s drama, but that doesn’t mean that Deacon has completely won over Brooke. Bill Spencer is still determined to repair his relationship with Brooke, and according to Bold and the Beautiful spoilers, on Friday August 15th Bill begs Brooke for her forgiveness. Brooke will have to make a decision, does she want to patch things up with Bill, or give Deacon another chance?

So B&B fans, what do you think happens to Hope in Paris? When it is all said and done, do you think Hope will choose Liam or Wyatt? Do you think that Ivy has her eyes on Liam? And, who do you think Brooke will choose, Bill or Deacon? Let us know what you think in the comments below and don’t forget to check CDL tomorrow for more Bold and the Beautiful spoilers.