The Bold and the Beautiful Spoilers: Will Liam Have Quinn Locked Up in Padded Room – Does Hope Choose Wyatt or Liam? 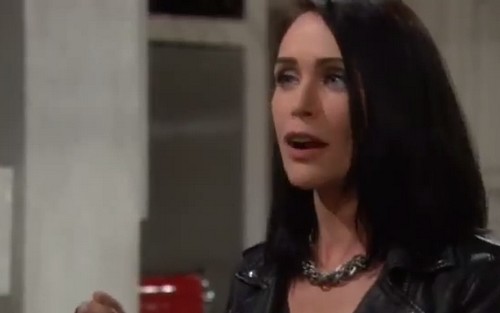 The Bold and the Beautiful spoilers reveal that on Friday September 19, Hope has a huge decision to make. A video of Quinn pushing Ivy in to the river in Paris has surfaced, and now everyone knows that Liam would have made it to the Eiffel Tower on time and married Hope, if Quinn hadn’t intervened. As soon as Liam seen the video, he rushed to Hope and proposed that she leave Wyatt and get back together with him, because they would be together right now if Quinn hadn’t pushed Ivy in to the river. Now, Hope must choose between the man she married, Wyatt, and the man she was supposed to marry, Liam.

A Bold and the Beautiful spoiler video for Friday September 19 shows that while Hope is deciding who she will spend the rest of her life with, Liam is having words with Quinn. Liam sneers, “you deserve to be locked up in a padded room and if I have anything to say about it you will be.” Quinn on the other hand doesn’t seem to be stressed about Hope leaving her son Wyatt, and she boasts to somebody in the video that Wyatt is with Hope right now, “making her realize that she can’t punish him for something I did.” Hope, Liam, and Wyatt aren’t the only people that Quinn is going to have to answer to about her scheming in Paris. The Bold and the Beautiful spoiler video also shows Brooke informing Deacon that, “it’ll be Hope’s choice this time, not Quinn’s.”

So B&B fans, what do you think Hope’s choice will be, Wyatt or Liam? She obviously had to have some feelings for Wyatt or else she wouldn’t have married him at the drop of a hat. Hope technically didn’t have to accept Wyatt’s proposal just because Liam didn’t show up, you would think that if she truly cared about Liam she wouldn’t have been able to marry another man that quickly. Which Spencer brother do you think Hope should choose? Let us know in the comments below and don’t forget to check CDL tomorrow for more Bold and the Beautiful spoilers.