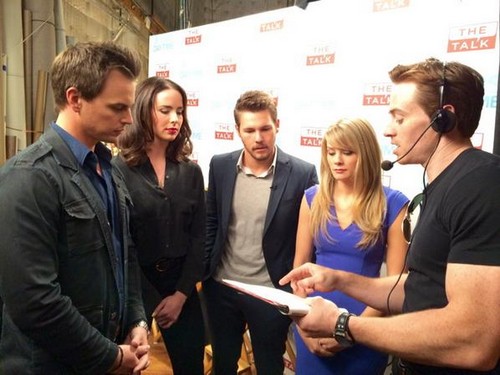 The Bold and the Beautiful spoilers for the week of November 10-14 reveal that B&B fans will not want to miss a single episode of the CBS soap. Liam, Ivy, Hope, and Wyatt’s trip to Amsterdam gets complicated, and back home Quinn continues to meddle in her son’s life and stir up some drama.

Monday November 10: According to Bold and the Beautiful spoilers for Monday’s episode, Wyatt (Darin Brookes) takes his mother’s advice and tries to force Liam and Ivy’s relationship along, meanwhile tensions begin to mount between Hope (Kim Matula) and Ivy when the photographer decides to put Ivy in front of the camera and force Hope to share some of the limelight. Back home Deacon tries to get Quinn back in check, and offers her some advice.

Tuesday November 11: Tuesday’s episode of Bold and the Beautiful finds Quinn (Rena Sofer) paying Bill Spencer (Don Diamont) a visit, and trying to recruit him to participate in her latest scheme. Back in Amsterdam, B&B spoilers reveal that Hope and Ivy share a heated confrontation over Liam.

Wednesday November 12: B&B spoilers tease that on Wednesday’s episode of the CBS soap, Eric Forrester is surprised when his old flame Taylor pays him a visit. In Amsterdam the Forrester Creations photo shoot continues, and Hope and Ivy are the stars of the event.

Thursday November 13: According to Bold and the Beautiful spoilers for the November 13th episode, Deacon makes a startling discovery and realizes that Wyatt and his meddlesome mother Quinn actually have quite a bit in common. B&B spoilers also tease that Hope can no longer control herself and it becomes very clear that she is jealous of Ivy and Liam’s budding relationship.

Friday November 14: All hell breaks loose in Amsterdam on Friday’s episode of Bold and the Beautiful when Hope discovers Wyatt was scheming to bring Liam and Ivy (Ashleigh Brewer) closer. Wyatt is upset that Hope is upset, she is married to him and shouldn’t be concerned with what Liam is up to. Meanwhile, back home at Forrester Creations, Caroline tries to save her marriage.

So B&B fans, do you think that Wyatt crossed a line meddling in Liam and Ivy’s relationship, or is Hope being overdramatic? Do you think Liam and Ivy will last, or is Hope going to break them up because she still wants Liam? Should Rick forgive Caroline, or is she getting what she deserves? Let us know what you think in the comments below and don’t forget to check CDL tomorrow for more Bold and the Beautiful spoilers and news.