The Bold and the Beautiful Spoilers: Bill Forced to Betray Brooke – Quinn Blackmails Bill To Have Sex and Cheat!

BY Amanda Austin on May 20, 2014 | Comments: 6 comments
Related : Soap Opera, Spoiler, Television, The Bold and the Beautiful 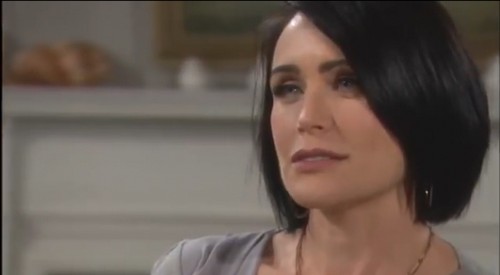 Bill Spencer and Brooke Logan appear unstoppable these days on CBS’s daytime soap opera The Bold and the Beautiful. However, B&B spoilers tease that there is still one major obstacle the couple must overcome before they can ride off in the sunset to Dubai and say their “I Do’s.” Quinn Fuller is becoming a force to be reckoned with, and Bill may not be able to keep her under control much longer.

A few months ago when Brooke and Ridge were standing at the altar, Bill Spencer was drinking away his sorrows, and had drunken sex with Quinn Fuller. If he had known the love of his life Brooke wasn’t actually married to Ridge, then he would have never went through with it. Later he learned that Ridge had run off with Katie, so he raced over to Brooke’s house to win her over again, and he did. However, he never told her about his drunken night with Quinn, and Quinn has been holding it over his head ever since. She even blackmailed him into giving Wyatt (their son) his last name so that Quinn wouldn’t tell Brooke that they had sex just hours before she got back together with Bill.

According to Bold and the Beautiful spoilers, Quinn will be at it again the week of May 19th. Bill finds himself in a precarious situation when Quinn tries to seduce him. If he turns her down, then she will tell Brooke about the last time they had sex and possibly derail his engagement. However, if he does have sex with Quinn, then he will be cheating on Brooke again and taking a chance that Brooke may find out about his infidelities.

Do you think that Bill will turn down Quinn, or have sex with her before he jets off to Dubai to say his “I Do’s” with Brooke? The first time he slept with Quinn it wasn’t technically cheating because he thought Brooke was marrying Ridge, if he goes through with it again it is definitely considered being unfaithful. What do you think Bill should do? Let us know in the comments below and don’t forget to check CDL tomorrow for more Bold and the Beautiful spoilers.

Fans at Soap Opera Spy have comments on Quinn and her antics:

Yeah Quinn! Show him what a real woman is like

I can see it all now. He tells Brook or she finds out somehow. Wounded to the core Brook goes to Ridge. Ridge leaves Katie for Brooke. All is right with the world.

Ridge won’t do anything but all bets are off with Quinn. Why would anyone want whispering Brooke. She’s completely boring.

Well it appears so far that people are not bothered by Quinn’s unorthodox tactics! Fact is that Quinn is a sociopath with certain fixed ideas about how she wants the world to work and which outcomes she desires. She reminds me of Dr. Obrect on General Hospital but less world-weary and more passionate.