The Bold and the Beautiful Spoilers: Wyatt and Detective Suspect Quinn of Murder – Surprise Paris Wedding, Who Gets Married? 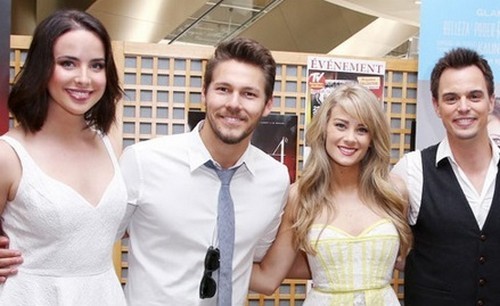 The Bold and the Beautiful spoilers tease August 4th-8th will be an eventful week on the CBS soap opera. According to B&B spoilers, Hope and Wyatt will jet off to the Forrester Creations Paris office to promote the Hope For The Future line. While they are visiting with Felicia Forrester in Paris, Liam bonds with the newest FC member Ivy Forrester. The Australian newcomer is proving to be quite the meddler, and after Liam fills her in on all of the latest drama with Hope, Ivy convinces him that they should jet off to Paris to see Hope. And, Liam decides that not only is that a great idea, but he is going to surprise Hope with a wedding!

While, Ivy and Liam are causing drama in Paris, Hope’s mom will be dealing with her own drama back home. According to Bold and the Beautiful spoilers, Deacon makes a move on Brooke and kisses her to let her know that he is still a contender in the race for her heart. Bill Spencer hasn’t given up on his almost wedding to Brooke though, and makes another last ditch attempt to get Brooke to forgive him.

Bold and the Beautiful spoilers tease that during the week of August 4th, Wyatt’s crazy mother Quinn Fuller returns home. But, she will be too busy dealing with her own problems to find time to interfere with Liam and Hope’s possible wedding in Paris. According to B&B spoilers, Quinn returns home surrounded by a cloud of suspicion, and Wyatt receives a phone call from a detective who thinks that Quinn forced Ricardo Montemayer to leave Wyatt the HFTF diamond and possibly even killed him!

So B&B fans do you think Liam and Hope will actually get married in Paris, or will this be another unsuccessful Bold and the Beautiful wedding? Will Brooke choose Deacon or Bill, or finally decide to be single and kick both men to the curb? And what about Ricardo Montemayer’s death, do you think Quinn is responsible? Let us know what you think in the comments below and don’t forget to check CDL for all of your Bold and the Beautiful spoilers!

Fans are not all great fans of the love triangle as these comments from Soap Opera Spy indicate:

I am SO TIRED of HOPE and Her Revolving Door……I’m on Team IVY…..I want Ivy to bring her down and take BOTH of those boys away from her…..SHE and her Mother need to Throw their Panties in the Freezer for awhile….LORD….it’s like they Can’t FUNCTION without MEN fighting for them.

Yes Liam and hope forever. Wyatt is a con just like his mother . Maybe now Quinn will get arrested.

Hope and Liam Are Played Out! Their Window of opportunity closed, a long time ago! Once a cheater, always a cheater! Stop beating that dead horse! Wyatt has been completely loyal, loving, and supportive. Why go back to a relationship that brought more pain than pleasure?? TeamHott!!

Can’t stand Hope & Brooke either with their constant wedding storylines. Can’t the writers come up with anything else?

Just please whatever you do keep Liam and Hope together they have been sweethearts for so long you should not break them up now.

So there you have it!