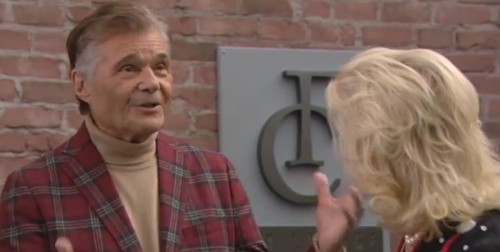 The Bold and the Beautiful spoilers for Tuesday December 23 tease another dramatic day at Forrester Creations. Fans have been waiting impatiently for Rick and Maya to get busted and their scheming to be exposed – and Ivy is on to them. But, according to Bold and the Beautiful spoilers, Rick I splaying hardball and he warns Ivy not to say anything about the kiss she witnessed between him and his mistress Maya. In the B&B spoiler video for December 23 Rick taunts Ivy, “You like your job right? You want to stay on here? Then pretend you know nothing about us.”

In other Bold and the Beautiful news, Wyatt is not coping well with the fact that his wife Hope up and ran away to Italy without so much as saying goodbye. And, he turns to Ivy for some support. Ironically Ivy and Wyatt have much more in common than they realize – and Ivy has no idea that Hope shared a heartfelt goodbye with her boyfriend Liam. In the Bold and the Beautiful spoiler video for December 23rd Wyatt vents to Ivy, “I don’t understand why she keeps pushing me away. Me of all her people, her husband. I don’t know where things stand with my wife.”

Also Bold and the Beautiful comings and goings confirm that Fred Willard will appear on the December 23rd episode of the CBS soap, and he has a surprise for Pam. So B&B fans, what do you think of Rick blackmailing Ivy and threatening to fire her? Will she keep quiet or stand up to him? What will Wyatt do about his marriage? Let us know what you think in the comments below and don’t forget to check CDL tomorrow for more Bold and the Beautiful spoilers and news.