The Bold and the Beautiful Spoilers: Will Pregnant Hope Abort Wyatt’s Baby – End Pregnancy To Be With Liam Again? 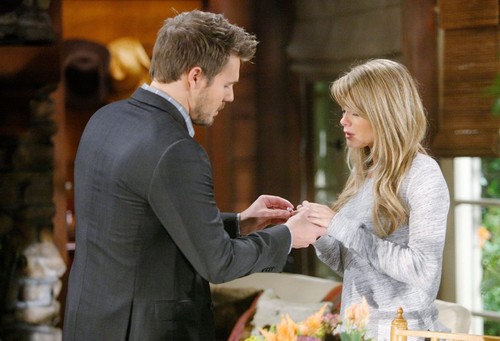 When The Bold and the Beautiful spoilers revealed that Hope Logan would announce she was pregnant, we knew we were in for a ton of drama, but we didn’t exactly expect Liam to take the news the way he did. On the Monday, September 22nd episode of Bold and the Beautiful, Hope revealed to Liam that she wants to be with him; however, she is pregnant with Wyatt’s baby. Hope seems to think that since Quinn pushed Ivy into the river in Paris, she and Liam now have a free pass to be together, but she is conflicted because now she is carrying Wyatt’s child.

Bold and the Beautiful spoilers for September 23 reveal that, at first, Liam is open to the idea of raising Wyatt’s baby and lying and telling everyone it is his, but Hope shoots down that idea because it is “wrong to lie” about the child’s paternity. On the September 22nd episode of Bold and the Beautiful, Liam announces that, since he and Hope are the only ones who know about the pregnancy, there is “only one thing left they can do…” Now, where we come from, it certainly sounds like Liam is hinting at Hope getting an abortion and terminating the pregnancy, and judging from fan response on the internet, that is how the majority of viewers at home took his statement as well.

So, is Hope going to abort Wyatt’s baby so that she can be with Liam? In the past, Hope’s character has had a holier-than-thou opinion of herself, and she even created an entire fashion line dedicated to teen girls waiting until they are married before they have sex. It’s hard to imagine how Hope could justify getting an abortion after getting pregnant by her own husband, all because she has decided that she would rather be with someone else. Then again, considering Quinn’s latest crazy streak, she could argue that the child may not be mentally sound considering it’s Fuller DNA.

What do you think, B&B fans? Will Hope consider aborting Wyatt’s baby so that she can be with Liam again? Or do you think we all misunderstood, and abortion is not the only other option that Liam was referencing on the CBS soap opera? Let us know what you think in the comments below and don’t forget to check CDL tomorrow for more BBl spoilers.