The Bold and the Beautiful Spoilers: Bill and Ridge Fight About Cheating On Katie With Caroline in B&B Brawl! 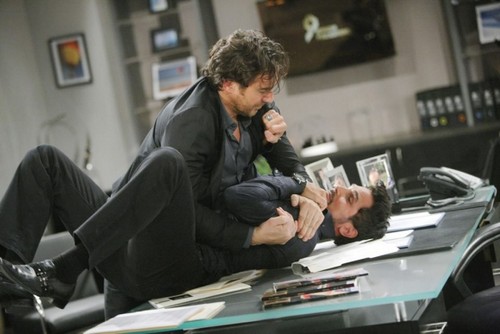 The Bold and the Beautiful spoilers tease that Ridge and Caroline’s make-out sessions and cheating in the design room will have a huge effect on the CBS soap’s characters heading to the month of November. Obviously, Rick’s fiancée Katie (Heather Tom) and Caroline’s hubby Rick are furious over the ordeal. But, rumor has it Rick is not the only B&B character who has a bone to pick with Ridge Forrester over his latest indiscretion.

Bold and the Beautiful spoilers reveal that Bill Spencer is beyond angry when he learns that Ridge hooked up with his niece, and simultaneously screwed up her marriage and her career. Bill has been feuding with Ridge for months now, and Ridge hooking up with Caroline (Linsey Godfrey) just adds fuel to the fire. B&B fans can expect a huge blow up when Bill confronts Ridge about cheating with Caroline.

According to B&B spoilers in the November 10th edition of Soap Opera Digest, “There has never been any love lost between Bill and Ridge (Thorsten Kaye). When Katie tells her ex-husband about Caroline and Ridge’s ‘arrangement,’ push literally comes to shove, followed by an all-out brawl between these two powerful and charismatic men. Both men have the best of intentions toward Caroline- just not towards each other.”

So, it looks like Ridge and Bill are about to go to battle… again. It’s bad enough that Ridge ruined any chances of Brooke marrying Bill, but on top of that he disrespected the mother of Bill’s son and disrupted his niece’s life. It’s safe to say Bill Spencer (Don Diamont) could be out for blood this time. So B&B fans, are you Team Ridge or Team Bill? Which mean do you think will come out on top? Let us know what you think in the comments below and don’t forget to check CDL tomorrow for more Bold and the Beautiful spoilers and news.