BY Kristine Francis on September 24, 2014 | Comments: one comment
Related : Recap, Television, The Bridge 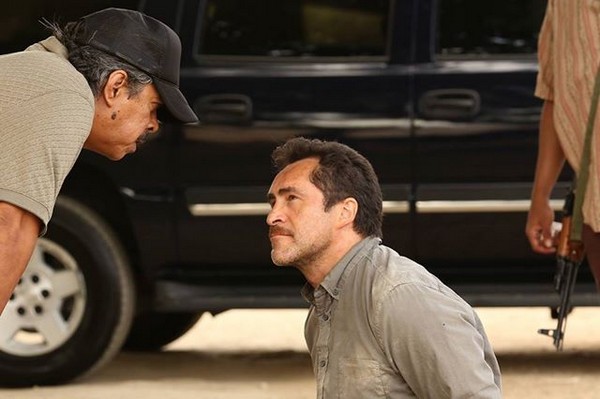 On last week’s episode Marco hit a crossroads in his relationship with Fausto while Sonya squared off with Eleanor. Linder & Eva discussed their future. Frye & Adriana uncovered a rift between agencies. Hunting down her attackers finally brought Steven and Eva together. And while she’ was now able to appreciate him – it was still hard for her to handle being touched. Luckily, Steven had been nothing but patient with her. Did you watch last week’s episode? If you missed it we have a full and detailed recap, right here for you.

We will be blogging The Bridge’s twelfth episode of season two with all the up-to-the-minute details at 10PM EST so make sure to come back to this spot and watch the show with us. Make sure to refresh often so you get the most current info! In the meantime, sound out in the comments and let us know what you think of the series.

Nacht is cleaning up after Sebastian. That’s why she was released and that also explains why no one is all that concerned that Sonya has the ledger. Soon the only incriminating thing left in the ledger would point towards Fausto!

However Nacht has recently been growing tired of what seems like a very one-sided relationship. All she has to go on so far is Sebastian’s word that he has what she wants. And in the meantime she noticed that none of his people have gotten their own hands dirty. So it makes her wonder – are they going to take care of her once she becomes redundant as well.

As for Sonya, she was underestimated. Nacht had pretty much figured out that it would take her some time to cipher the ledger so she was going to leave Sonya last. Yet Sonya was quick on her feet. She cracked Sonya’s code earlier than anyone had planned. Including the CIA that’s even now preparing Sebastian for an easy transition into power.

When Sonya brought her findings to Wade though he immediately became worried enough for the both of them. He realized they had to act on what they knows as fast as possible. And soon they were chasing after the assets Nacht had oh so lovingly named in her book. Nacht had did them a favor by writing down addresses so it wasn’t all that hard to track these people, but Sonya and Wade ended up arriving on the scene after Nacht had been there already.

Sonya needs these people in order for Ruiz to be safe. If her friend has some leverage of his own when he makes a deal with Fausto then maybe it won’t all end in a blood bath. But what she doesn’t know is that it’s too late for Ruiz. Fausto and his men had taken him into custody and he’s currently being held prisoner alongside Sebastian’s junkie daughter.

[12:04:54 AM] Kristine Francis: On one of these visits that were too late to be of any good – Sonya and Wade ran into Daniel and Adriana. Normally, they would have been polite and respect journalistic integrity, but Wade was running out of patience so he threatened to beat the information out of Daniel. And that got the other two to talking. The journalist had found out about the war between the CIA and the DEA. The CIA have allowed Fausto to be in power this entire time seeing as they got a profitable cut of the action.

Then when Fasuto proved to be unstable – they transferred that same kind of deal to Sebastian.

Daniel and Adriana also had a map they didn’t understand. Though Sonya did. The map of a piece of land near the border between the US and Mexico. The land itself appears to be landscaped for an upcoming project and whatever it turns out to be – the foursome have pretty much guessed for themselves that the CIA wanted a cut from that too.

And they were right. The henchmen the CIA sent down south to deal with Nacht’s release also had to remind Sebastian about the deal they made. This precaution was needed because Sebastian has been losing focus what with his daughter’s kidnapping and the Americans didn’t want him to come to an agreement with Fausto without them.

They say they’re looking into returning his daughter but they’re not. So Sebastian did his best to work within those constraints. Fausto was told he had safe passage from out underneath the Marines’ blockade.

Yet that was lies and Fasuto saw right through them. The marines had no plans on bringing him in alive and they shot on site (completely disregarding the hostage situation) and ended up killing one of Fausto’s men that he had sent out as a decoy. As for the real Fausto, he took his victims and they made a run for it in the mountains.

Then there’s was Captain Robles. He’s about to finally be brought up on rape and other criminal charges and yet Steven didn’t know that. All Steven knew was that he wanted to get revenge for Eva even though Eva had asked him to start a new life with her away from crime.

So when Steven ignored her and pursued the Captain anyways – he was shot. The captain wasn’t as dumb as he looked.