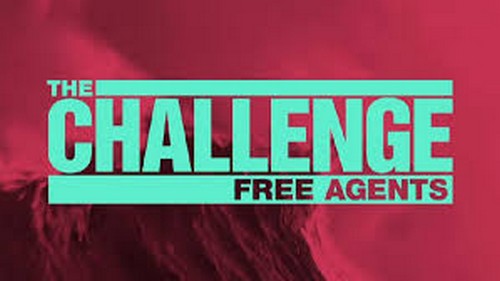 Tonight on MTV their long running reality series The Challenge: Free Agents airs with a new episode called, “Talk to the Hand.”  On tonight’s show two tough females are pitted against each other in an epic elimination round.

For those of you who are new to the show, The Challenge: Free Agents is about Twenty-eight money-hungry competitors who arrive in Punta del Este, Uruguay, expecting to be teamed up with an ex, an enemy, or even a weak rookie. Little do they know, this is an individual game, and they’ll be answering to no one but themselves in the most unpredictable Challenge ever.

On last week’s episode, Jessica and Cara Maria ended up in a no-holds-bar brawl and the score was tied.  The other players were shocked to see how hard Jessica was playing, they didn’t think she had it in her to shut down Cara Maria.  After a long dirty fight Cara Maria finally wins 2-0.  Jessica was officially eliminated from The Challenge.  After the match Cara realizes that there is something seriously wrong with her hand, it’s aching and throbbing, and she goes to see a medic. In the guy’s round, Cohutta is officially eliminated from The Challenge.  Did you watch last week’s episode?  If you missed it we have a full and detailed recap, right here for you.

On tonight’s episode  things start to get heated, two tough females are put against each other and they go all out in an epic fight to see who will be the last one standing. Who will win and who will be sent home?

Tonight’s episode of The Challenge picks up the morning after Calhutta was eliminated; the players wake up and realize that Cara Maria never returned from the hospital. They are afraid that she is going to be eliminated from the competition. CT and Johnny take Laurel aside to tell her that she has been a crappy friend to Cara Maria.

Cara Maria returns from the hospital with a huge cast on her hand, Johnny and Jessica comfort her. Laurel sits down with Cara Maria when she returns and tries to talk to her. Cara Maria really doesn’t want to hear it. She announces she is “done with her,” and storms out.

The players head down to the beach for their next challenge. TJ tells Cara that she can stay, but she must assume all responsibility if she injures herself further. TJ shares the rules to the competition, the players must swim across the lagoon to a sand dune and dig up puzzle pieces and swim with the pieces back to land where they must put together their puzzle.

The players divide into teams and start swimming across the lagoon. They are shocked when they hit the water and realize there is more mud than there is water and the challenge is going to be harder than they thought. Laurel and Leroy are currently in last place. Nany and Bananas find the first puzzle piece and head back to land with it. Cara Maria is having a serious problem digging, and her partner CT is getting frustrated. They are still ahead of Johnny and Devyn though. All of the teams are neck and neck again, and seem to be struggling trying to complete the puzzle with the pieces that they dug up.

Later that night the players decide to put the game on the backburner and head out for drinks. Cara Maria is frustrated that Theresa is kissing Nany’s butt so that she won’t put her up for elimination. She is convinced Theresa is a “snake in the grass” and she will do whatever it takes to stay in the game, even throw a crippled girl under the bus.

The next day Leroy and CT sit around and speculate about which challenge they would have to go into tonight. Cara Maria and Laurel are laying in their room not speaking to each other. Nany and Bananas sit down and deliberate over which girl they went to put up for elimination, Cara or Theresa. Bananas calls CT over to them to try to form a deal with him instead of putting him up for elimination, but CT doesn’t want to play games with him, he says it is simple, don’t say my name and I won’t say yours.

Zach is sweating, because he has put Bananas up for elimination before.

TJ arrives and sits down with the players to determine who is going up for elimination. Nany and Bananas decide to vote in CT and Cara Maria. Cara bursts in to tears and curses Theresa out and said that the only reason she is up for elimination is because she didn’t campaign for votes all night.

After the elimination meeting Johnny and CT head to Cara Maria’s room and comfort her and make sure she isn’t going to quit; she reassures them she is going in to elimination.

Later that night the players all head to elimination. Cara Maria and CT are already up for elimination, after the draw they learn they will be competing against Leroy and Laurel. And, unfortunately we have to wait until next week to find out whether CT, Cara Maria, Laurel, or Leroy are going home. To Be Continued…