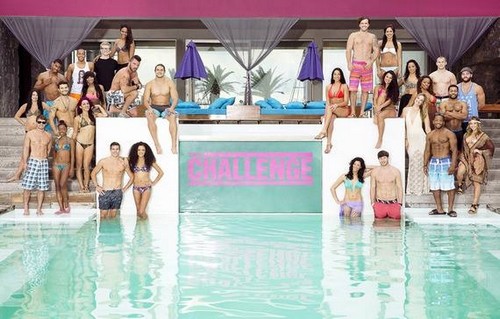 Tonight on MTV their long running reality series The Challenge: Free Agents airs with a new episode called, “The $350,000 Pyramid.”  On tonight’s show the players go through elimination once again.

For those of you who are new to the show, The Challenge: Free Agents is about twenty-eight money-hungry competitors who arrive in Punta del Este, Uruguay, expecting to be teamed up with an ex, an enemy, or even a weak rookie. Little do they know, this is an individual game, and they’ll be answering to no one but themselves in the most unpredictable Challenge ever.

On last week’s episode, things started to get heated, when two tough females were put against each other and they went all out in an epic fight to see who would be the last one standing. Who won and who was be sent home? Unfortunately we have to wait until th net episode to find out whether CT, Cara Maria, Laurel, or Leroy are going home. Did you watch last week’s episode? If you missed it, we made a detailed recap, you can check out here.

On tonight’s episode it’s all coming to an end soon, now the players will face another elimination in Chile right before the show goes into the finale; rough rapids challenge.

Episode 11 begins where the last episode left off at the elimination round. In this elimination round, the competitors must punch holes into dry wall to help them climb to the top. The guys go first putting CT against Leroy. CT starts off strong and finishes strong, leaving Leroy behind to be sent home. Next, Cara Maria and Laurel battle it out. With Cara Maria’s injured hand, she struggles to punch the dry wall which allowed Laurel to take the win by a mile. With the looming tension between Laurel and Cara Maria, Laurel apologizes. Cara Maria admits that she thinks Laurel is a good person, however, they’re friendship will never be the same.

After the elimination round, the crew gets news that they’re heading off to the Andes Mountains. Excited and feeling good about the positive vibes between the remaining competitors, the crew drinks up and packs up to go to Chile. Their new home in Chile is a cabin in the woods alongside a lake and facing a smoking volcano. In the jacuzzi that first night, the guys anticipate the challenges to come. Meanwhile, Nany talks about feeling lonely now that her friends are all gone and labels Devyn as one of the weakest competitors.

The next day the crew is shocked to find that they must face a draw before the final round. The kill cards go to Theresa, Laurel, CT, and Johnny “Bananas”. The challenge is Puzzle Pyramid in which the competitors must solve three levels of puzzles. First up are the girls. Laurel gets ahead quickly as Theresa fumbles with the tangrams. After some frustration, Theresa catches up to Laurel at the final level. They each spend some time on the final puzzle before Laurel solves it for the win and puts Theresa on the first flight home. Next up are the guys. Johnny starts off strong but CT catches up at the second level. Nonetheless, Johnny beats out CT for the win and earns himself a spot in the final round.

Back at the house, Nany is upset about Laurel’s win, insinuating that Theresa worked harder. Meanwhile, Devyn feels underestimated as everyone teases her about not making it through the challenge.

The final challenge is revealed—the competitors are tasked with climbing to the summit of Mount Villaricca in a five-stage challenge. The first is a kayak challenge in which the competitors must work in pairs to paddle their way through the wild river. From the start, Bananas and Laurel speed off, placing them in the lead. Further back, Johnny and Nany are in second place. As anticipated, Devyn and Zach fall far behind as Devyn’s wrong moves have their kayak spinning in circles. Upon hitting a rock, the boat topples over throwing the pair into the rapid water. The episode ends with Devyn being rescued while Zach gets pulled downstream.

Where will the pairs go from here and what’s up next for them in the remaining four stages of the final challenge? Only the season finale will tell!