The Comeback Recap “Valerie Tries to Get Yesterday Back”: Season 2 Episode 2 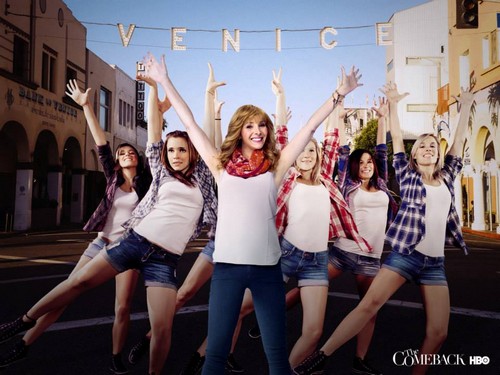 Tonight on HBO The Comeback returns with an all new Sunday November 16,season 2 episode 2 called “Valerie Tries to Get Yesterday Back.” On this evening’s episode, Valerie [Lisa Kudrow] brings back Jane when the network wants her to use a professional crew to follow her backstage at “Seeing Red.” Meanwhile, Billy gets Valerie an appointment with celebrity stylist Brad Goreski for the Golden Globes.

On the episode, while shooting footage for a self-produced reality TV pilot she hoped would get picked up by Bravo, Valerie Cherish learned that her nemesis, Paulie G., was creating a series for HBO about a sitcom writer and his relationship with a neurotic older actress – a redhead named Mallory Church. After dropping in on Andy Cohen’s lunch, an incensed Valerie crashed the HBO offices to create a “table flipping scene” worthy of a Bravo show, as she told them to cease and desist. Did you watch the last episode? If you missed it, we have a full and detailed recap right here for you.

On tonight’s episode as per HBO’s synopsis, “preferring she use a professional crew for behind-the-scenes footage of “Seeing Red,” HBO asks Valerie to bring back Jane, the producer who followed her on “Room and Bored.” Meanwhile, Val’s publicist, Billy, gets her an appointment with celebrity stylist Brad Goreski for the Golden Globes.”

Tonight’s episode airs at 10 PM EST on HBO and is bound to be full of all the typical twists and turns that we have come to expect from THE COMEBACK. We’ll be recapping it right here for you but in the meantime feel free to hit up the comments now and tell us your thoughts on season 2.

Tonight’s episode of The Comeback kicks off with Val recording one of her “Val Logs.”  She announces that he has big news and she has been cast in an HBO show.  Mark interrupts her video session and walks in to the room.  He wants to know why she is telling people she is doing Paulie G’s show, because there is “no f-ing way” she is doing it.  Mark thinks that she should reconsider playing a not-so-flattering version of herself for a drug addict.  Val whines that Paulie has changed, and it’s HBO – they do great shows like Game of Thrones.

Val heads to the HBO office and stops to get shots of herself with the Sex And The City poster and The Sopranos poster.  She gets called in to the office to meet with the execs.  Apparently she called the meeting because she wants to discuss her film crew, she wants to do some behind the scenes footage.  They inform her that they will have to fire her kids and hire a union crew.  They tell her that they want her to contact her old producer Jane Benson and see if she will be on board.  Val is shocked when she hears that they are going to start filming the show next week and she is scared she won’t have time to prepare.  Before she leaves they invite her to attend the Golden Globes on behalf of HBO.

Val, Mickey, and her film crew leave the office and head out on a mission to find Jane Benson.  They head out in a dessert down a dirt road and after driving forever they find Jane’s house, they pull up to the house and there are a bunch of horses, sheep, and dogs outside.  Jane comes outside and greets Val, she invites her and her film crew inside.

Jane informs Valerie she isn’t interested in her offer, and she is going to pass on the producer position.  Val notices an Oscar that Jane is using as a door –stop.  Jane explains that she is a Jewish lesbian so she made a documentary about lesbians during the Holocaust.  Jane serves the film crew banana bread while Val takes pictures with her Oscar.  Mickey is intrigued with her goat butter and keeps interrupting their negotiations to ask how the butter was made.
Jane peer pressures Valerie into smoking weed with her, Jane admits that she saw Paulie G. shooting up heroine when they worked together on Room & Board.  Jane says she “doesn’t see the point in it all,” and Valerie pleads that she needs her on her new show.  Jane excuses herself and says she needs to feed her horses.  Valerie points out that if she joins the show she will be able to buy more horses.

Later that day Jane shows up at Val’s house with Tyler and the film crew – Mark is annoyed and doesn’t see why they always have to on camera.  Val decides to cheer Mark up by telling him they are going on a date to the Golden Globe Awards.  Val’s phone rings and Mark sees that it is Dr. Chadra – he warns her about the last time she got a little work done.

Val and the crew head to her stylist to pick out a dress for the Golden Globes.  He gives her a red feathered dress and tells her to try it on, even though she protests.  She puts it on and whines that it’s “not her.”  She finally settles on a dress and they head to the awards, when they arrive they learn that the tickets that HBO gave her aren’t actually to the awards but to a “viewing suite” in the hotel.  Val and Mark walk in the suite and it is filled with a bunch of girls they don’t recognize speaking Russian.  Val runs in to Paulie G. and he wants to know why Jane is with her.  She explains that HBO requested her.  Val tells Paulie she is going to “do her best” on his show.

Paulie apologizes for being rude and says it is because he is upset about the Golden Globes.  He feels like he got screwed when they sent him to the viewing suite instead of the actual show.  Val tries to cheer him up and reminds him there is a party afterwards.  He says he has to go to an AA meeting and rushes out.  Mark and Val decide they are ready to go home too, they wait until Paulie G is gone though so they don’t have to ride in the elevator with him.