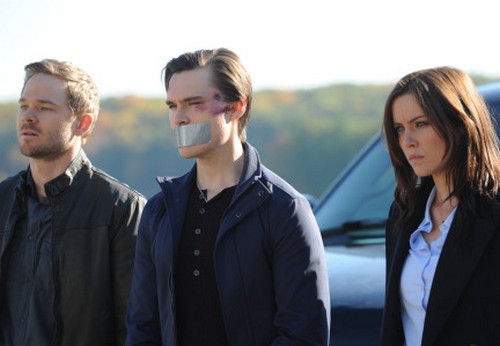 Tonight on FOX their hit psychological thriller THE FOLLOWING airs with a new episode called, “Fly Away.”  On tonight’s episode Luke finds himself in a troubling situation.  Did you watch last week’s episode?  We did and we recapped it right here for you.

On last week’s episode In an attempt to learn new information, Ryan and Max captured a suspect. But complications led to a game of dangerous cat and mouse. Also, Joe grew accustomed to his surroundings and established a plan of his own, while Emma realized she was in dangerous company.

On tonight’s episode Looking for back-up and hoping to execute their plan, Ryan and Max contact the FBI. But Weston has other ideas, leading to a standoff between good and evil. Meanwhile, Joe’s new relationship escalates into uncharted territory, and Luke finds himself in a troubling situation.

We will be live blogging The Following Episode 6 with all the up-to-the-minute details at 9PM EST so make sure to come back to this spot and watch the show with us.   Make sure to refresh often so you get the most current info!  While you wait for the episode you can catch a sneak peek of tonight’s episode BELOW!

Luke has returned to the house with Giselle’s body but he hasn’t told anyone what happened. That’s because he’s refusing to admit it to even himself that she was dead. Instead he chose to pretend Giselle was still alive and had gotten in bed with her corpse. It wasn’t until his twin stop by that Luke was face to face with the truth – Giselle is dead and Ryan Harding killed her. Now is he going to admit his own part in Giselle’s demise or let Ryan take all the blame?

Mike wants the Feds to look into a possible mole. Someone had to be more than highly skilled in order to change federal DNA records. Nevertheless Agent Mendez doesn’t want to hear about a mole. She’d rather accept incompetence than a traitor.

Her reluctance sets Mike on edge. He doesn’t like her lack of action nor does he appreciate how she wants to throw his psyche evaluation into the picture. That’s why when he gets the call from Ryan asking for back up, he doesn’t notify Mendez about it. Mike is starting to think going rogue might be the best option. Especially now that Joe Carroll is involved.

He showed up at Ryan’s door without the cavalry. He explained to Ryan and Max that the FBI might be compromised. He tried to open an investigation into a picture of Mandy they found and was stopped. It’s possible that Roderick wasn’t the only follower to go on to joining the police force. And one of them could have climbed the ladder all the way to the bureau.

The only option they have left to them is to wait for retaliation. Ryan did kill two of their own and someone was bound to arrive for retribution. And they assumed correctly. Luke came full with anger wanting to kill Ryan and got taken down by Mike. Mike has gained a temper since their last round with followers. He doesn’t want to play nice with interrogates anymore and after witnessing it; Ryan actually has to be the one to tell him to ease up a little.

Luke wasn’t supposed to go to Ryan’s but did so in spite of his mother’s orders. Lily wanted to move the rest of the family without causing any undue harm. That’s why she told everyone to keep Ryan a secret from Joe. She simply wanted to take Joe and her kids to her hideaway in Venezuela. Then she got the call from Ryan. Ryan offered to make a trade. He was willing to hand over Luke for Joe.

But Lily preferred plan B. She had recently learned thanks to Mandy that Joe wasn’t feeling up to traveling. And he wasn’t. Joe had made plans with Emma to make a run for it but Mandy had overheard them. So out of jealousy, she let it slip to Lily that Joe was speaking to Emma.

Knowing that Joe will have to be forced to coming with her family made Lily’s decisions easier. She drugged him so that he can stay put and then showed up at the meeting with a fresh hostage. However she was expecting Ryan to be there and he wasn’t. He sent Max and mike to handle hostage negotiations while he tracked down the rest of Lily’s children hoping to find Joe.

Max and mike made the switch but it didn’t do all that good. By time Ryan showed up at the house, Joe was on his way to making an escape. Emma and Mandy were able to revive him and help him get away from Lily’s hospitality.

They stabbed one her kids to escape. And Ryan was able to question her and figure out where Joe was heading. The feds had been notified about sightings so they got in on the action as well. They all arrived – Ryan and the massive man force – at the airfield together yet it was too late once again. Joe had gotten a warning and left with his girls with time to spare.

Agent Mendez didn’t like getting disappointed and she made it clear that its Ryan’s fault that Max and Mike now have ruined careers. In the meantime Ryan knows for a fact, with the latest incident, that Mike was right. There is someone on the inside and the investigation will only be able prosper if they stick to using outside channels.

Though their main concern has to be with what’s happening with Mike. During the trade off, Luke had foolishly stayed behind and tried to attack the young agent but Mike was seen by Lily and Mark shooting Luke. The mother and son quickly fled the scene believing Luke dead when he wasn’t. He still had the energy to go for another round with Mike and again lost. Mike nearly beat him to death and was saved from doing so by Max. She brought back to whatever dark place that’s been fueling his anger.

Luke is alive and no one outside the Feds knows that!

Lily was grieving for her son when she made contact with Joe. She was so glad to hear he escaped that she thought he would offer her sympathy for the loss of her son. Apparently she forgot how cold blooded Jo can be. He doesn’t’ care about her or her kids. She drugged him and he doesn’t forgive easily. It’s why he said thanks for the support and now you’re dead to me.

Lily is furious over his desertion. She gave up her privileged life just to be with him, even sacrificing several children, only to be abandoned. In the end all she’s left with is Mark.