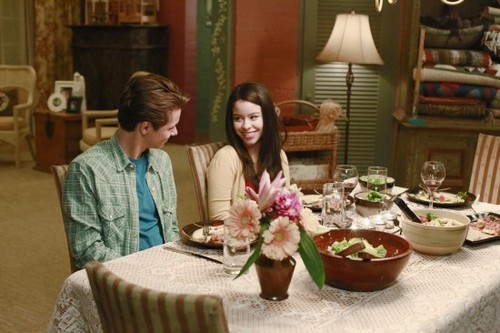 Tonight on the ABC Families their new drama, THE FOSTERS returns tonight with a new episode called, “Don’t Let Go.” On tonight’s show Callie feels conflicted after meeting with her dad, and she worries how this will affect Jude. Elsewhere, Jesus has a hard time at school without his ADHD medicine.  Did you watch last week’s episode? We did and we recapped it here for you.

On last week’s episode a good deed puts Callie in an awkward situation with a friend.  Callie found a way to use her photography skills for a good cause, but it unintentionally led to trouble for someone she cared about. In an effort to clear his own conscience, Brandon made a deal with an unscrupulous classmate and found himself in over his head. Mariana dealt with the unwelcome consequences of her stunt to earn Chase’s affection, and tension came to a head between Jesus and Emma during a wrestling match. Meanwhile, Stef and Lena contemplated another big step for their family.

On tonight’s episode an encounter with her father (guest star Jamie McShane) leaves Callie conflicted about her future and worried about the effect the reunion will have on Jude. Meanwhile, Jesus struggles to maintain his focus at school without his ADHD medication, and Mariana gets an unexpected invitation from Zac’s mom (guest star Romy Rosemont). Lena and Stef come to a major decision with the help of a good friend. The episode was directed by Zetna Fuentes with the story written by Marissa Jo Cerar and Zoila Amelia Galeano and the teleplay by Kelly Fullerton and Marissa Jo Cerar.

Tonight’s season 1 episode 17 is going to be an exciting one that you won’t want to miss, so be sure to tune in for our live coverage of ABC Family’s The Fosters tonight at 9 PM EST! While you wait for our recap hit the comments and let us know what you think of The Fosters season 1 this year. Check out the sneak peek video of tonight’s show below, while you wait for the recap!

The episode begins with Callie paying a visit to her dad to figure out what he is going to say to Jude when he stops by to visit him. Her dad says that he is going to say that he wanted to wait to see and communicate with everyone when he was stable and was prepared to get them back. Callie is frightened by this and when she gets back to her house she asks Jude how he would feel if dad asked if he could get back custody of them. Jude responded by saying, “I don’t know, he is our dad”.  This makes Callie nervous that one of them or even both of them could get hurt by having contact with their dad.

The episode continues with Brandon Foster at his dad’s house where he is getting accustomed to living with his dad Mike who is Stef’s ex-husband. He is persuaded to get back to playing the piano because he is extremely gifted musically. The episode then shifts over to Jesus who is having trouble studying and understanding his schoolwork, particularly math, without his ADHD medication. The episode then shifts to Marianna who talks to Brandon about when he is going to move back and how he likes living with his dad. After she gets confirmation that he is going to be moving back, she is approached by Zac’s mom who invites her over to dinner.

Meanwhile, Stef and Lena are meeting with someone from their kid’s school who is offering his services to donate his sperm to Lena so she can get pregnant. Lena seems to be really on board with this decision but it looks like Stef has some concerns even though she consents. Stef then leaves the school to go over to Mike’s house to chastise him for grounding Brandon without consulting with her first. She reminds him that she still has custody and needs to be consulted at all times. The scene then shifts to Callie who is dealing with her feelings about her dad by talking to one of her friends that she knew in juvenile detention.

The episode picks back up with Marianna going to dinner with Zac and his mom where she learns that his mom is a bit crazier and a bit more forgetful than she led onto when she first met her. Zac was embarrassed about his mom and this was the reason why he did not call her back that day when they kissed. Brandon then consults with his dad’s girlfriend about their living situation where he tells her that he probably won’t be staying here very long. He would like to return to his foster family. The episode then turns back to Callie where she revisits her dad and asks him why he abandoned her and never wrote to her again. He said that he felt guilty and was afraid that she would write back but he back to support them now.

At the breakfast table the next day, Jude says that he doesn’t want to see his father after all, but everyone convinces him that he might regret it later. He said he would go if Callie goes too, and she agrees. Later Brandon and Callie are talking on the beach about her and her dad and they get into an argument about why she still has feelings for him.

Lena and Stef then tell everyone that night about their plans to have a baby the natural way. The episode ends with Callie and Jude’s dad showing up and telling them that he loves them but that he is signing away his rights. When asked why he says because it was the truthful thing to do, and that he could never provide for them the way that Stef and Lena have. And this is where the episode ends with Callie and Jude being able to be officially adopted by Stef and Lena.