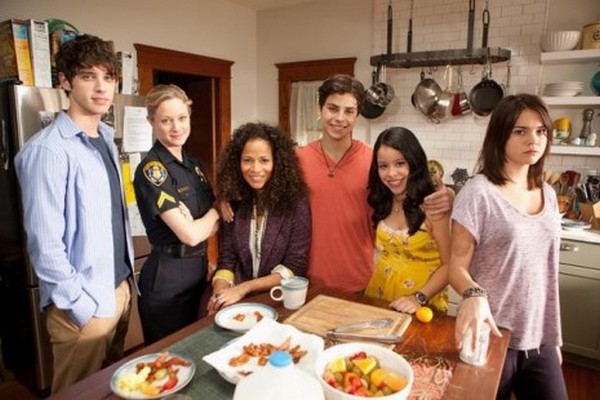 Tonight on ABC Family their hit drama The Fosters returns with a new episode called “Truth Be Told.” On tonight’s episode, Brandon’s band go on a hike as they seek inspiration. Meanwhile, Callie worries about Jude and how her actions have affected him; Stef debates about whether to proceed with her investigation regarding Ana; and Emma reconsiders her breakup with Jesus.

On the last episode Callie made an important decision to address the hold-up in her adoption face on, but Jude may had been more affected by her choice than he lets show. Things heated up between Callie and Wyatt, but Callie realized she may not be emotionally ready to take the next step. Lena vied for the Principal’s job at Anchor Beach, which caused some friction in her already rocky relationship with Timothy. When the dance team held auditions for a new member, Mariana questioned why she was chosen to join the team, and she didn’t like the answer. Did you watch the last episode? We recapped it all here for you.

On tonight’s episode Callie frets about the anxiety her recent decisions have caused Jude. Emma second-guesses her breakup with Jesus, putting him in an awkward position with a new love interest and with Mariana, who becomes unwillingly involved in his dilemma. Stef struggles with her suspicions about Mike and debates moving forward with her investigation into Ana’s disappearance. When Brandon’s bandmates take him on a hike for some “special” inspiration, Brandon opens up to an unexpected confidant about his past transgressions. And Callie’s emotions get the better of her when things get hot and heavy with Wyatt. The episode was written by Kelly Fullerton and directed by Ron Lagomarsino.

There’s nothing wrong with Jude at least physically. His moms took him to get checked out and the doctors believe his refusal to speak is more psychology than just a child’s rebellion.

But Callie feels like it’s her fault. Her brother was doing fine until she reached out to her other biological family. And she does have a point. It can’t be a coincidence that he stopped talking right around the time she found out she had another sibling out there and it’s surely isn’t helping his condition that she’s still in contact with her sister Sophia.

So she feels guilty. Callie is used to being Jude’s protector and she doesn’t know how to protect her brother when he isn’t really giving her a clear answer on what’s wrong. Although Jude’s condition is much bigger than merely his sister growing attachment to someone else.

Connor finally went to Lena to talk to her about Jude. He told her what’s been going on with his father and how much he regretted hurting his friend. So he went to her hoping she could make everything better.

Lena and Stef are clearly worried about their son but it’s hard focusing on him with so much going on all at once. Without meaning to sound callous, Jude’s refusal to speak is the least of their troubles. Not only are they having a baby (their sixth child) but Stef is still secretly investigating Mike. She thinks her partner and the father of her son might have killed the twins’ druggie mother. And no matter how her investigation ends when Mike finds out about her suspicion – there goes whatever ground they managed to build since their divorce.

Stef had told Lena everything. She mentioned Mike going off the wagon, the blood he had on him because of an alleged bar brawl, and the murdered Jane Doe that could very well be Ana. Stef gave her wife everything she had found out so far and then she asked what to do next.

When and/or if she can connect Ana to the Jane Doe then she’s going to have to report Mike. Stef didn’t know if she could do that and Lena told her she’s simply going to have to.

Brandon hasn’t been doing so well and once again his parents have failed to catch on. A few months ago, he slept with his dad’s girlfriend and the guilt from that one night is killing him. Even to this day he can’t stand to be alone in the same room with her. And his new friends aren’t helping the situation by introducing him to pot brownies. They foolishly thought it would get him to unwound.

Yet he found himself freaking out in the middle of a forest of all places. So he ended up having to call for help. Thankfully, Lena was able to come to the rescue.

Lena was probably the best person Brandon could have called. He truly did need to speak to someone and his other mom has always been a great listener. Instead of keeping mum about everything, he told her he slept with Dani. And when she needed clarification – he assured her that yes he meant his father’s live in girlfriend.

Then he asked her to keep quiet. Brandon knows what the truth would do to his parents and he didn’t want to exacerbate his father’s drinking or have his mom go gunning for Dani. He just wanted it all to go away.

Callie is floundering in the wake of Jude’s muteness. He didn’t know but he’s always been her rock. So she tried to get her mind off of him and onto someone else only to find out that she couldn’t move on to the next step with Wyatt. When she attempted to – it brought on a panic attack.

She still loves him but now she’s wondering if she loves him enough to trust him with that part of herself. Callie’s past sexual experiences haven’t exactly been dreams come true so maybe Wyatt isn’t the one that can help get over her past. Because it is the past that’s haunting her. Callie is starting to “see” Liam wherever she goes. And she needs her brother to support her.

Marianna had a falling out with her brother when she chose to stick by team member and new friend Hayley over him. She did this by purposely going to Emma and telling her that Jesus has moved on thereby ensuring Jesus didn’t dump her friend for his ex and that her friend didn’t dump her.

Jesus on the other hand called what she did betrayal so he’s angry at her.

As for their biological mother, Ana isn’t dead. Mike has secretly been sneaking away from Dani to go and visit her at some seedy motel. Stef followed him after work one day and it had shocked her to see Ana there and alive as well.

But why is Mike keeping in touch with the woman that tried to blackmail them?