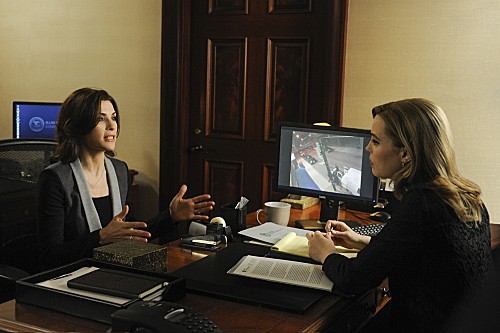 Tonight on CBS THE GOOD WIFE returns with a new episode called, “We, the Juries.” On tonight’s show Alicia and Will face chaos in the courtroom when their co-defendants are judges by two juries at the same time.  Did you watch the last episode?  If you want to get caught up before tonight’s show, there is a full and detailed recap for your enjoyment here!

On the last episode Alicia represented a band suing a TV show for copyright infringement, but the simple case became psychological warfare when Will joined the opposing council and used his knowledge of Alicia’s strengths and weaknesses against her. Also, Eli hired Kalinda in an attempt to get ahead of a potential scandal.

On tonight’s show Alicia and Will each represent one-half of a couple accused of smuggling drugs, but the courtroom becomes mired in confusion and legal technicalities when they insist on separate jury pools. Meanwhile, Cary attempts to woo a Lockhart/Gardner client, Kalinda tries to repair a damaged relationship and Marilyn begins her investigation into possible voter fraud during the gubernatorial election.

Tonight’s The Good Wife season 5 episode 12 is going to be exciting, and you won’t want to miss. So be sure to tune in for our live coverage of The Good Wife — tonight at 9PM EST! While you wait for our recap, hit the comments and let us know how excited you are about the new season of The Good Wife.  Check out a sneak peek of tonight’s episode below!

Tonight’s episode of The Good Wife opens in court, Alicia and Will are representing a husband and wife. The judge is forcing them to work together to represent the married couple.

Eli, Marilyn, and Peter are arguing over the video that surfaced of men unloading ballot boxes at Peter’s election. Marilyn wants Peter and Eli to stop discussing the matter, until it is fully investigated. Eli thinks that Will may be behind the video leak.

Meanwhile, Alicia and Will are arguing in court. They are trying to select a double-jury, and they can’t even decide on the jurors. During recess Robyn revels to Alicia that they have a chance to steal another one of LG’s clients. The Paisley Group is feeling neglected because Will keeps postponing his meetings with them. Alicia instructs Robyn to get information on Darla Riggs, Will’s co-defendant. Kalinda approaches Cary after recess and apologizes for everything, Cary blows her off though.

Back in court the double-jury is arguing over who gets to sit in the jury box, the judge decides they can alternate. The first witness to testify against Ms. Riggs and Mr. Lampay is an airport security officer who searched their possessions when they flew in from Brazil, and found $100,000.00 worth of cocaine. Will’s team is supposed to be representing Ms. Riggs and Alicia’s team is supposed to be representing Mr. Lampay. Instead of working together to prove their clients innocent, they are clearly working against each other and trying to throw all of the blame on the other team’s clients.

Marilyn is questioning Eli about the ballot-stuffing, the man in the video is Jim Moody. Eli claims he had no idea Moody was switching ballot boxes. Eli does confess that he told Moody to do “whatever he could” to get the 12th precinct’s vote.

Robyn is visiting a woman that was on the plane with Darla Riggs, and questioning her about Mr. Lampay and Mr. Riggs. Before she can get any information from the witness, Kalinda shows up to question her as well.

Eli meets with Moody, and tries to discuss the ballot-stuffing. Eli is paranoid because he thinks that Moody is taping their conversation. Moody clearly wants to testify and state that he was ordered to stuff the ballots, but Eli threatens him and reminds him he doesn’t want to be the governor’s enemy.

The witness that was on the plane with Lampay and Riggs takes the stand and testifies that Riggs was having sex with a woman in the bathroom on the plane, and there is no way she was in love with Lampay.

During the next recess Will and Alicia tell their clients their best bet at freedom is to blame each other for the drugs, Lampay and Riggs don’t want to lie and say they aren’t in love though. Meanwhile Will and Alicia notice that one of Will’s jurors is fraternizing with one of Alicia’s jurors. They have a double jury, one jury for Briggs and one for Lampay and they have taken special care to make sure the juries only hear certain testimonies so their judgment is not clouded.

Kalinda joins Cary at the bar, and wants to buy him a drink. Cary doesn’t want to talk to her but he agrees to give her five minutes. Kalinda insists that she “misses him.” Cary is still bitter that she told Will he planned to quit after she promised to keep his secret. Cary spills a drink and heads to the bathroom to clean up, and leaves his phone on the bar. Kalinda reads through his text messages, and realizes him and Alicia are working to steal their Paisley client. She doesn’t look happy.

Meanwhile during court Will receives a text message from Kalinda, letting him know there is trouble with the Paisley Group. Will rushes out of court and meets Kalinda at Paisley Group. In the text message Kalinda read, it said the CEO had trouble with a prostitute named Haley. Kalinda and Will tell the CEO that they know about him getting caught with a prostitute named Haley, the CEO is upset. Haley is not a prostitute, it is his granddaughter, and she is in a wheel chair. Cary set them up! Now, the Paisley Group is definitely going to take their business to Alicia’s firm.

Alicia receives a phone call from Marilyn. Marilyn needs to question her regarding the ballot-stuffing, as Peter’s lawyer, not as his spouse.

Will is not happy about the stunt Cary pulled with the Paisley Group, and he is taking it out on their clients in court. The judge has had enough of their objections, and juror drama. Alicia asks to meet the judge in his chambers. She reveals that the two jurors from opposite juries were fraternizing during recess and wants the case thrown out. Will calls her a liar and says he never seen the jurors talking, even though he obviously did.

Alicia heads to Marilyn’s office for questioning. After reviewing the video Alicia swears she has never seen it before, and doesn’t know Jim Moody.

Alicia heads to Peter’s office, and orders his staff to leave the room. Alicia is not happy. Peter swears he has no idea what happened with the ballots. Their son even testified in court that there was no ballot-stuffing, when Alicia had the votes delegitimized. She orders Peter to “fix it,” and storms out of the room.

Kalinda pays Cary a visit, to let him know that she knows he set her up. Kalinda declares they are “even now.” Cary tries to shut the door in her face, but she pushes it back open. She wants him to get a drink with her, even though he says it’s “not a good idea,” he still heads out with her.

The jury has come to a decision. Darla Briggs jury has found her not guilty, Will’s team is victorious. Alicia’s client Lampay’s jury still hasn’t made a decision. They have called for copies of some of the testimony.

Alicia and Cary are trying to get Lampay to take a deal from the prosecutor, and serve four years in jail. Lampay hesitantly agrees to the offer, since Alicia can’t guarantee they will win the case. Lampay is going to jail for four years.

Marilyn has finished her report, and given it to Eli. Eli is furious that it is “inconclusive” which means the Feds will have to investigate the ballot-stuffing. Marilyn explains that it is inconclusive because Peter can’t waive his attorney-client privileges with Will, because Will is obviously out to get him. Marilyn states that it is Will Gardner’s fault that the Feds are going to investigate Peter.