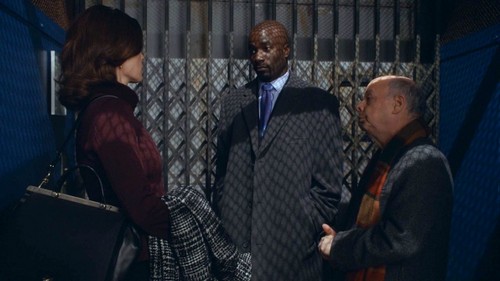 Tonight on CBS THE GOOD WIFE returns with a new episode called, “Parallel Construction, Bitches.” On tonight’s showFlorrick-Agos and Lockhart-Gardner fight to keep Lemond Bishop as a client when he is arrested on a drug-related charge that may have resulted from a leak inside Alicia’s firm. .  Did you watch the last episode?  If you want to get caught up before tonight’s show, there is a full and detailed recap for your enjoyment here!

On the last episode Alicia and Will each represented one-half of a couple accused of smuggling drugs, but the courtroom became mired in confusion and legal technicalities when they insisted on separate jury pools. Meanwhile, Cary attempted to woo a Lockhart/Gardner client, Kalinda tried to repair a damaged relationship and Marilyn began her investigation into possible voter fraud during the gubernatorial election.

On tonight’s episode the investigation into gubernatorial election fraud continues to move forward when Marilyn is approached by an agent in the Office of Public Integrity.  Meanwhile Florrick-Agos and Lockhart-Gardner fight to keep Lemond Bishop as a client when he is arrested on a drug-related charge that may have resulted from a leak inside Alicia’s firm.

Tonight’s The Good Wife season 5 episode 13 is going to be exciting, and you won’t want to miss. So be sure to tune in for our live coverage of The Good Wife — tonight at 9PM EST! While you wait for our recap, hit the comments and let us know how excited you are about the new season of The Good Wife.  Check out a sneak peek of tonight’s episode below!

It has been over a month and a half since the last episode of the Good Wife aired. Because of the Grammys, the Olympics, and the Oscars, the executives at CBS decided to wait to air the Good Wife when they could finish out the season consecutively. The last episode of the Good Wife ended with Peter being caught in a huge political scandal where he allegedly tampered with votes that he used to win the governorship of Illinois. We can rest assured that this will be a major storyline over the next few episodes.

This episode begins with Alicia and her daughter on the couch watching a cop show when Charles Lester Lemond Bishop’s personal attorney shows up at their door. Mr. Bishop has been arrested for drug possession and trafficking and he has a hearing that Mrs. Florrick needs to attend.

At the hearing both Florrick Agos and Lockhart Gardner are there to represent Mr. Bishop. The witness for the prosecution says she saw Mr. Bishop with three bags of drugs, but Will Gardner was able, with the help of Howard Liemann, was able to refute that testimony. The prosecutor then said that they got the date wrong.

Back at Alicia’s office Bishop and Lester confront Alicia about someone in her office leaking information about the facts of the drug dealing. After an investigation was held, they concluded that no one from her office leaked the information; but, after a trick by Bishop and Lester to see who was snitching all parties involved realize that they are being wire tapped and are forced to switch over to burner phones.

Alicia and Cary then speculate that the DEA is wiretapping their phones and that the entire trial needs to be put away. After some careful investigation they realize that they are being held hostage by something that is known as parallel construction. This is where the DEA is getting information from the NSA, but in order to deflect that they develop another defense that tries to show how they got that information. Based on this information the judge ruled in Lemond Bishop’s favor and threw out the case.

Meanwhile the Governor Florrick’s political scandal is starting to heat up. The department of public integrity is looking into what happened with the voting scandal and they first start by talking to Marilyn. Marilyn at first does not give up any information, but in order to cover her own ass she gives the official the video tape of the voting fraud taking place.

Later on the official gets information from the NSA about how Will Gardner is the key to busting Mr. Florrick. The episode ends with the official talking to Will Gardner and reminding him that he could be facing jail time if he tries to cover anything up; Will, however, refuses to talk and is seemingly trying to protect Alicia by protecting Peter at the same time.