The Good Wife LIVE RECAP: Season 5 Episode 21 “The One Percent”

BY Heather DiPietro on May 12, 2014 | Comments: 2 comments
Related : Recap, Television, The Good Wife 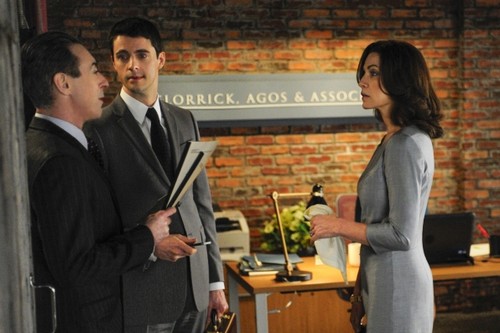 Tonight on CBS The Good Wife returns with another dramatic episode. In “The One Percent” Alicia manages the fallout when her corporate CEO client’s insensitive statements to the press threaten the fate of a multi-billion dollar merger. Meanwhile, Diane and Louis Canning take opposite sides in a class-action suit involving a pharmaceutical company; and Eli learns the truth about Alicia and Peter’s relationship.

On last week’s episode when Alicia had a chance encounter with a charming entrepreneur during jury duty; she began to consider options outside her marriage and seek the advice of her mother. Meanwhile, Diane’s friends came to her for legal advice when their son was accused of selling drugs on the Internet.  Did you watch last week’s episode?  If you missed it we have full and detailed recap, right here for you.

On tonight’s episode Alicia manages the fallout when her client’s insensitive statements to the press threaten the fate of a multi-billion dollar merger. Meanwhile, Diane faces a potential conflict of interest when she and Louis Canning are on opposite sides of a class action suit involving a pharmaceutical company. Also, Eli learns the truth about Alicia and Peter’s relationship.

Season 5 episode 21 looks great and we’ll be updating it live for you beginning 9PM EST. While you’re waiting for the drama to unfold hit up the comments and let us know what you think of the season so far!

Tonight’s episode of The Good Wife begins with A Paisley Group merger meeting, where Alicia’s client James Paisley is trying to discuss the changes going underway over the sound of protestors outside. Alicia is representing him in his lawsuit, one of his gay CFO is suing him for wrongful termination. While Alicia is addressing the board and reassuring them the lawsuit is nothing to be concerned over because the CFO was fired for selling trade secrets and not his sexual preferences, a man runs into the room and slams a whip cream pie into her client’s face.

Alicia heads back to the office and finds Finn waiting for Eli. Eli marches in with bells and whistles and says that the police report has been completed and Finn is in no way responsible for Will’s death. However, since Finn’s name has been cleared he fears that Castro will “try to strike back” and drudge up Finn’s ex-wife’s miscarriage and his sister’s overdose. Eli warns that when Castro contacts him with “something from his past that will make him angry,” he has to contact Eli so he can help him.

Canning finds Diane in the office meeting with a class action group against Kael Pepper and she is planning on representing a bunch of kids who have been poisoned by the company. Diane can tell Canning is up to something so she sends Kalinda to investigate. Canning reveals to Kalinda that he is seconds away from signing the Cal Pepper lab, and their office can’t represent the person suing the company and the company.

James Paisley goes in CNN live to discuss the pie in his face by a protestor. Paisley apparently wasn’t prepped very well on what he should and shouldn’t say publicly because he goes as far as to say the 1% of America are like the Jews, and the protestors at his office are Nazis. Alicia and Canning both watch the footage live. Alicia calls Canning to accept his crappy offer of $140,000, however Canning says it has now been raised to $3 Million…and he will see her in court.

Jim pays Peter a visit and reveals to him that Finn was photographed leaving Alicia’s apartment two weeks ago. He warns him that “it will come out.” And, the scandals are endless-how will it look when the people learn Peter endorsed his wife’s lover? Peter dumps a glass of water on Jim’s head and tells him to “have a good day.”

Peter confronts Eli and wants to know who’s idea it was to endorse Finn? Eli says it was his and Alicia’s idea. Peter says they are going to have to hold off on the endorsement, Eli is confused.

Canning and Alicia head to court to start picking jury members of the jury for the Paisley lawsuit. Canning reveals to the judge that he will also be going after Paisley for religious discrimination. Alicia heads to Paisley’s office and begs him to retract his station.

Finn calls Alicia and wants to know what happened and why Eli and Peter are delaying the announcement of Finn’s endorsement. Alicia calls Eli and wants to know what happened. Eli heads into Peter’s office and catches him flirting with an intern named Lauren. Eli threatens Lauren and tells him her if she wants her job she can never go within fifty feet of the Governor again.

Paisley is swayed by Alicia and a Holocaust survivor that she introduced him to, and he goes public and apologizes for his comments about Jews. Then he proceeds to slam Italians and Greeks and says that in America we “don’t reward the lazy.” Alicia is back to square one, and has to clean up another one of Paisley’s racial messes.

Eli heads over to Alicia’s house and demands to know what is going on between her and Peter. Alicia tells him to that she is “just tired and done.” She says that they are staying together, but that’s it. Eli isn’t ready to watch their relationship go down in flames, he pleads with Alicia, and tells her that Peter loves her.

Canning and Diane are going to both pitch their lawsuits to the board and the board will vote and decide if they are going to represent Kael Pepper or the children that were poisoned. Diane is busy campaigning around the office to ensure she gets more votes than Canning.

Eli calls Alicia out and asks her if she is sleeping with Finn? Alicia tells him to go to hell. She says that Finn came to her apartment the morning before the integrity panel so that they could get their strategies together. Eli rushes back to Peter and informs him that Alicia isn’t sleeping with Finn.

Alicia decides to clean up Paisley’s mess and she goes on the air to issue an apology. However, she mixes u the names of the two African American news anchors she is speaking to. Now, the media is making her out to be racist against African Americans. They have already removed all of the Jewish people, Italians, and Greeks from the jury. Now they are going to have to go back to court and remove the African American jurors. Canning tells Alicia they can just stop now and settle at $5 Million.

A press release revealing that Canning has signed on to represent Kael Pepper, which is a company that poisoned thousands of kids. Canning realizes that the jury is not going to want to side with him and he finally agrees to settle the lawsuit for $1 Million, which is a “drop in the bucket” for Paisley.

Peter is staring at a picture of Alicia, and drinking his sorrows away. Lauren, the intern that Eli told to stay away from the Governor walks in and asks him if he “needs anything.”