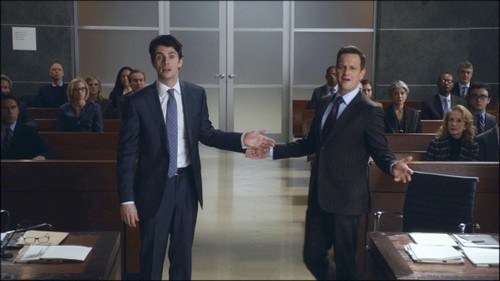 The Good wife is one of those prime time shows that has a huge following that is also quite vocal. The fans were overwhelmingly unhappy when Will Gardner was shot dead during a murder trial. The powers-that-be had to write out the character one way or another because the actor who played Will, Josh Charles, wanted to explore other options at the end of his contract.  Fans had hoped that Will and Alicia Florrick (payed by Julianna Marguiles) would ultimately end up together and once he was killed off some fans opted to tune out in protest.

Now, according to the April 21st print edition of GLOBE magazine, the producers are ready to give Alicia a new love interest and it’s someone already familiar to viewers, Finn Polmar. The character is played by British actor Matthew Goode and already has a connection to Alicia because he took a few bullets while trying to cover Will in that courtroom death scene. CBS is hoping to win over some viewers by starting to tell the story of Alicia and Finn’s blossoming relationship before the season ends on May 18th. My guess is that then they can gauge viewer reaction and decide whether to move forward with the romance for next season or else scrap it and go in another direction all together.

Do you think that a romance between Alicia and Finn can work? Are fans ready to move on and do they want to see Alicia with anyone else just yet? Tell us your thoughts in the comments below!