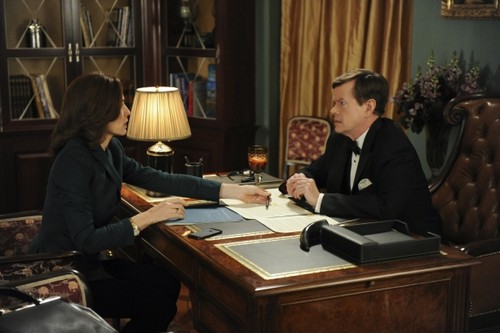 The Good Wife returned tonight to CBS with another great episode.  I cannot wait till the next episode.  To whet your appetite we have a sneak peek video and some insight for you below on what is going to happen on the next episode called, “The Deep Web.”

On tonight’s episode when Alicia payed a visit to longtime client Colin Sweeney, she found herself in the unwanted role of witness when a body was discovered in his home. Meanwhile, Eli stepped in when an unfortunate picture of Zach threatened to become a public relations nightmare for Peter. Josh Charles returned as episodic director. Dylan Baker returned as Colin Sweeney and Laura Benanti guest starred as his fiancée, Renata Ellard.  More happened!  If you missed the episode we have a full and detailed recap, right here for you.

Spoiler alert: If you’re one of those people who doesn’t like spoilers, stop reading now! We have some juicy spoilers for you about the season 5 episode 20 of CBS’s “The Deep Web.”

CBS’s Official Synopsis: “When Alicia has a chance encounter with a charming entrepreneur during jury duty, she begins to consider options outside her marriage and seeks the advice of her mother. Meanwhile, Diane’s friends come to her for legal advice when their son is accused of selling drugs on the Internet.” Michael J. Fox returns as Louis Canning and Stockard Channing returns as Alicia’s mother, Veronica Loy. Nestor Carbonell guest stars as entrepreneur Daniel Irwin.

On next week’s episode Alicia considers options outside of her marriage when she meets a handsome entrepreneur, while serving on jury duty. To help think through the situation, she consults her mother. Meanwhile, Diane helps some friends when their son is accused of selling drugs on the Internet.

The Good Wife Season 5, Episode 20 “The Deep Web” airs on CBS on May 4th, 2013. Check out the preview video & some photos from episode 19 below and let us know in the comments below what you think!