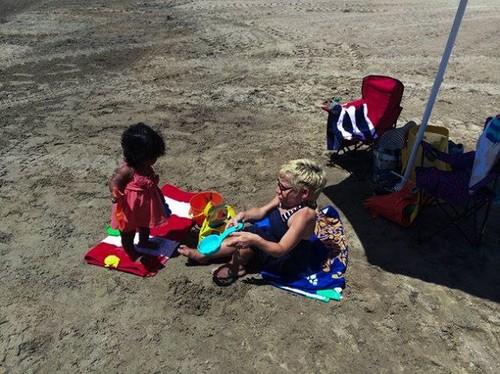 Tonight on TLC The Little Couple returns with an all new Tuesday December 9, season 7 episode 2 called, “The Things We Left Behind,” and we have your recap below. On tonight’s episode, Will and Zoey love their devices and are highly skilled at using technology.

On the last episode, after a year of extreme highs and lows, the Little Couple was ready to enjoy everyday life. First, they were off to Florida for the long-delayed baptism of Will and Zoey. Afterwards, they hit the road again, heading to Washington D.C. Did you watch the last episode? If you missed it, we have a full and detailed recap right here for you.

On tonight’s episode as per the TLC synopsis, “Will and Zoey love their devices and are highly skilled at using technology. But Jen and Bill want the family to take some time away from their handheld screens so they head to Jen’s favorite beach in Galveston.”

Tonight’s episode of The Little Couple kicks off with Bill playing with Zoey and Will and teaching them their animals and what sounds they make.  Will is in speech therapy now twice a week, and Jen has been working with him on an App on the tablet they teaches him his ABC’s.  Both of their own kids have a tablet, and they took to technology “amazingly fast.”  Zoey can find a camera on any device – cell phone or tablet.  Jen is conflicted because as a mom it’s so easy to just give her kids the tablets, but the doctor in her knows that they need to be more active.

Jen decides it is time to put the electronics away and get outside with the kids – she and Bill take Zoey and Will outside to draw on the sidewalk with chalk.  Zoey isn’t thrilled about it, but after some coaxing Bill gets her to go outside with them.  Jen tries to teach Will how to play hopscotch – but he winds up just drawing lines.  Bill’s back is getting progressively worse, and it is hard for him to get down on the ground and play with the kids like he used to.

It’s time for Jen to head to her doctor’s appointment for a monthly check-up to make sure that the cancer hasn’t returned.  Since she already works at the hospital, Bill meets her there for her six month check-up.  The doctor has good news for them – and says it is time for them to remove her chemotherapy port.  Jen is thrilled by the news, the fact that her doctor thinks it is safe to remove the port means that she doesn’t think the cancer is going to return.

The next day Bill and Jen decide to spend some quality time with Will and Zoey, They pack up the truck and head to the beach with the kids.  They can’t wait to go fishing, Jen and Bill are very competitive with each other when it comes to fishing, and Jen insists that she always catches more fish.  The beach they are going to is special to them because it is the same place where they got their vows renewed.  Jen and Will decide to split up and spend some one on one time with the kids.  Jen and Zoey head to one part of the beach, and Bill and Will go fishing at a different location.