BY Joanna Mazewski on January 12, 2014 | Comments: one comment
Related : Recap, Television, The Mentalist 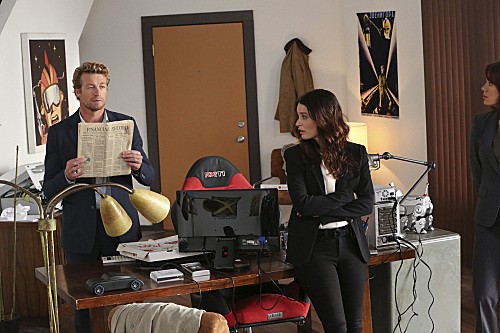 Tonight on CBS THE MENTALIST finally returns with a new episode called “The Golden Hammer.”  On tonight’s show Jane and the FBI investigate the death of a high-tech cartographer who may have unearthed a spy ring before he died.  Did you watch last season six’s episode 11? If you want to get caught up before tonight’s new episode, we have a full and detailed recap, right here for you!

On last episode the FBI was tasked with finding the killer of several DEA agents, and Jane went on a date with a beautiful woman associated with the case.

On tonight’s show Jane and the FBI investigate the murder of a high-tech cartographer who may have unearthed a spy ring before his death. Meanwhile, Rigsby and Van Pelt find themselves on the trail of an alarming conspiracy.  A mapmaker leaves a coded message for Jane – can you figure out the clues before he does?  Navid Negahban (“Homeland”) guest stars as Hassan Zarif, a man with information about the cartographer’s death.

Tonight’s The Mentalist Season 6 episode 12 is going to be exciting, and you won’t want to miss. So be sure to tune in for our live coverage of The Mentalist — tonight at 10PM EST! While you wait for our recap, hit the comments and let us know how excited you are about this season of The Mentalist.  Check out a sneak peek of tonight’s episode below!

RECAP: In Texas, there’s construction going on at a bridge, a an speeding ends up hitting multiple cars, the van hits a couple of cars and a man from the van is a shirtless guy who’s also not wearing any pants. The man is named Charles Whitaker; the last word he said was helping me before he died. Patrick, Teresa, Kim and Cho are watching the camera footage of the man running in a building. Teresa mentions how the briefing room feels like an aquarium, Patrick is watching what the man is talking to Kim about; turns out that Patrick can read their lips and is seeing what their discussing. The man wants Patrick to leave the room, because he doesn’t believe that Patrick is qualified for the case. Patrick talks sarcastically about not knowing anything about Charles working at the pentagon. The man says it’s unacceptable to Kim, Patrick tells him not to get angry at Kim. Head of FVI walks in and mentions how he talked to the deputy and he approves of Patrick working on the case, the man then leaves. Patrick thanks the head of the FBI for what he did.

Kim and Teresa are talking to Curtis Whittaker about his brother’s death; they ask if he was ever a drug addict. Patrick starts to compliment Curtis’s suit, saying that it looks very nice. Patrick then finds out that Curtis works in finance, and then mentions how his brother drew maps for a living something different compared to the Whittaker family. Patrick finds a newspaper and ask if it’s Curtis’s, he says no and Patrick asks him to leave; before he leaves Patrick mentions how he’s a prime suspect, Curtis hears and is surprised then leaves. Patrick starts reading the newspaper, while Teresa and Kim go talk to more suspects. Patrick is looking through the newspaper at a diner and seems to have found something in it. Kim and Teresa walk in to speak to a suspect, Teresa gets a call from an old friend he invites Teresa to dinner for the night to discuss something. Kim and Teresa are now going in to speak to Gabrielle; they walk in to speak to Gabrielle and Leo. Teresa and Kim sit down, Gabrielle apologizes for security; they ask about Charles death and how they think it’s a murder. Teresa asks if Charles was working on anything recently, they say he wasn’t working on anything important; they then go into more detail of how Charles was at work. Kim wants to speak to all the employees, but she wants to speak to everyone who was working on Sunday. Patrick is at the diner still, he’s working on the newspaper; Patrick calls someone and says that he might have found a lead. Kim and Teresa are talking to one of the employees; they don’t get much information of Charles from, but that he was working on a huge project. They then decide to talk to Mark who used to work with him; they ask him if Charles ever mentioned if there was data being leaked. Cho is at the diner with Patrick, Patrick starts talking about how he found a message in the newspaper that Charles found a spy. Cho says that it’s still possible that Charles killed himself, Patrick then says that Charles apartment room was childish which showed he was naïve; but this newspaper was far too serious for him. They find footage of security cameras with Charles getting the newspaper; he puts the newspaper into his jacket before entering the building. Patrick and Cho are retracing Charles movements to when he bought the newspaper, Patrick then finds a tree with a bench underneath it; Patrick is leaving the newspaper on the bench until someone comes to pick up the newspaper. Cho decides to go hit the gym while Patrick waits, Teresa calls Patrick to see what he’s doing; though when she and Kim get in the car Patrick was already there. Teresa talks about her date with her old friend, Patrick is surprised about it.

Teresa is on her date, she asks her date how he’s doing at work; he then brings up that there have been several times during meetings that his phone gets hot even though he hasn’t used it as if somebody hacks it to listen in. Teresa asks him if there’s something he’s not telling her, he then brings up that the last couple of months he has a bad feeling that someone malicious is watching him. Teresa then says that he should go to the cops for this, but he has no proof and may sound crazy. He says it’s not all in his head; he wants Teresa’s advice on the situation. Teresa tells him where to go to get some great digital security, and then they drink to hot phones. Teresa talks to Patrick about what happened during her date, Patrick then says that the date could have been just for the sake of having a date with her. Patrick is sitting on the bench, he notices a man who sits on the bench where the newspaper is on, the man on the bench slowly picks up the newspaper, and Patrick then gets up and asks the man for the time making an excuse that he forgot to wind up his watch. Patrick asks if the man took his phone, the man is fighting saying that he didn’t take Patrick’s phone. Patrick asks for the cop nearby to call his phone, it turns out the phone was in the man’s pocket. Asan is now being interrogated by Patrick and the head of FBI, they ask how long he’s been buying intelligence, and he doesn’t give a clear answer. The head of the FBI asks about the seller, Asan talks about that there’s another spot in the park where they do exchanges. Asan though has no idea who the person is; Patrick asks Asan about Charles Whittaker and talks about what happened to him. Patrick says that they think Charles was murdered, he believes that whoever Asan is buying from could be behind it. Asan says his client couldn’t have killed Charles, there’s no way. Patrick says that he’s got a plan to get the people behind Whittaker’s murder, though his first idea is illegal he can’t do it and must think outside the box. Patrick is talking to Cho and tells him to be relaxed; Cho admits he’s nervous because Patrick is acting like how he used to do in the early days. Patrick says he’s fine and knows how to work with these things, Patrick intercepts Curtis Whittaker after he leaves his job; Patrick tells Curtis that he knows what he’s done. Curtis punches Patrick’s arm and Cho then arrests him.

Kim walks in and finds that Curtis Whittaker wants to speak to his attorney, because he was “grossly” arrested by that man; it looks like they wanted to just speak to Curtis, because they believe that Charles was murdered because he found a spy. It seems that they need to make the killer find someone else to feel safe with; they want Curtis to help them out with this. Teresa and Kim are now talking to Gabrielle to update them with the progress on the case; they make a bluff about Curtis being the one behind the murder. Wayne is with his child along with Grace, the man Teresa went on a date with is talking to Wayne and Grace talking to them that he wants to find out if his phone is being hacked. Wayne and Grace talk about this case, they’re wondering if it’s all in his head, but are hoping that’s not the case. Cho is sitting in disguise at the park; Patrick and Teresa are there also. Teresa see’s the CEO secretary of the company Charles worked at make the drop, she’s now walking away, but she gets caught by the FBI. Teresa is shocked, Patrick jokes about Teresa’s people skills.

Cho is talking to the secretary, he asks how she got into the espionage business it seems that it was due to her father killing himself; she wanted to make money, due to being contacted by a friend of her fathers. She tried to stop, but she wasn’t able to quit because they wouldn’t let her. Charles pick up on her spy work, she tried to lie to Charles about the whole ordeal. She visited Charles to shut him up, she Tasers him first then injected some kind of drug into him that was enough to kill a horse. She says that she had no choice but to kill Charles, Cho says that she did have a choice. Wayne calls Grace and tells her that he can’t find their client anywhere, Grace tracks the location; Wayne gets ready to go to the location, but finishes his taco first. The head of FBI gives a medal to Curtis, which is for his brother’s bravery in helping to stop the spy. Patrick is underneath a covers to hide himself from Curtis, he gets up when Curtis leaves headquarters and tells Kim the vehicle he wants. Wayne arrives at the address Grace gave him; Grace is sipping on some tea or coffee and checks her computer. Wayne is looking around the complex and finds an open door, he enters it. Grace finds a bunch of names of FBI agents popping up on her computer. Grace calls Wayne, but he’s not picking up, she leaves a message for him that all of their phones are being bugged. Wayne enters the dark room and finds a man tied to a chair, he turns him around and finds him dead. Wayne looks around, then at the dead body.