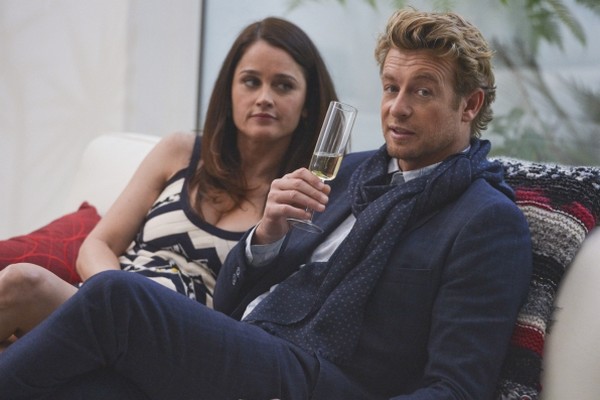 Tonight on CBS THE MENTALIST returns with a brand new show.  On tonight’s episode called, “Violets,” Jane devises a risky plan to ensnare a group of art thieves. Meanwhile, Lisbon forms a bond with an agent who’s on the FBI’s art squad.

On tonight’s episode Grace was kidnapped by the killer who had been hunting former CBI members, but when the prime suspect appeared to have an airtight alibi, Jane had to rely on all his skills to locate her before time ran out.  More happened!  Did you watch tonight’s show?  We did and we recapped it right here for you.

On tonight’s episode Jane enlists his colleagues in a dangerous sting operation to catch a deadly team of art thieves. Meanwhile, sparks fly between Lisbon and an agent from the FBI’s art squad.  Jane plans a dangerous ruse to trap a team of art thieves, and sparks fly between Lisbon and a fellow agent.  Is Lisbon more focused on the  handsome new colleague.

Tonight’s The Mentalist Season 6 episode 16 is going to be exciting, and you won’t want to miss. So be sure to tune in for our live coverage of The Mentalist — tonight at 10PM EST! While you wait for our recap, hit the comments and let us know how excited you are about this season of The Mentalist.  Check out a sneak peek of tonight’s episode below!

RECAP: Patrick asks Abbot what’s going on, Abbot explains it’s the art squad. Patrick then notices a woman and a man talking to each other in the interrogation room, the woman explains how the painting is of her and that her husband painted it. The man lets her know they’ll try to get the painting back for her, Patrick over hears them and says that her husband is not gone, that he’s always with her if she remembers him. Patrick understands that they need help, if they want it of course because murder is his business. The art squad admit that their cases normally never lead to homicide and that Patrick would be of help. The woman is named Sylvia. Patrick lets Abbot know that he’s volunteered him and his team to help the art squad. Abbot tells Kim to get in touch with Agent Pike of the art squad to brief them on the case. He tells them that a man has stolen a lot of paintings during a heist and murdered a man named John the husband of Sylvia. Anthony was the man who was a lead; it turns out though they couldn’t get enough evidence on the man to take him in. Patrick already has a plan to solve this case, to go under cover as a fellow painting heist man. Patrick and his team are brought into the art investigation room in the FBI HQ; Patrick is looking around and loves the selection they have. Patrick wants the man to know that the artwork is stolen. Abbot arrives to sit with Kim, Teresa and Cho waiting for Patrick to brief them. Wiley arrives into the room; he will brief the team because Patrick is in the party house. Wiley explains how they will put cameras in Polaski’s favorite bar, Cho will be the muscle, Teresa will play the inside woman along with Patrick as the inside man.  Wiley hands Kim her dress, she will be the face to lure Polaski into a bedroom where Patrick and Teresa will take over. Wiley sits down at his computer as they begin; Polaski is sitting at the bar. Abbot appears ordering a drink, Wiley is watching through the cameras. Abbot is drinking and watching boxing; he spills his drink and asks Polaski to hand him a napkin of some sort. Abbot it’s asking the bar tender about boxing and beings to speak about it with Polaski. Wiley is explaining to Pike about what Patrick told him to do along with watching the cameras together. Abbot and Polaski are drinking together taking a shot, they begin to speak about boxing again; this time Polaski is talking about his experiences with boxing. Polaski buys them both another drink, Cho is given a text from Wiley that it’s go time. Cho gets pissed off with playing pool and arrives saying that Polaski has a loud annoying laugh.  Polaski tells him to leave; Cho doesn’t listen and ends up getting attacked by Polaski. Polaski misses and Cho punched him in the face, Abbot ends up punching Cho in the face and escaping with Polaski. Polaski and Abbot make their way to a new drinking place which is higher end. Abbot and Polaski arrive at the house; at the door is Teresa who invites them in.

Patrick arrives greeting Abbot and his friend Aaron Polaski, Patrick tells him that he can make himself at home and get a drink. Pike and Wiley are eating Chinese food and are watching through cameras, Pike asks about Teresa and Patrick asking if they’re in a relationship. Wiley tells him they’re not. Aaron notices Kim and instantly begins to hit on her; everything is going to plan at this point. Kim walks away, looking back to make sure Aaron follows which he does. Kim walks into the room along with Aaron; Patrick enters the room and stops the party before it starts. Patrick tells Kim to leave; Aaron notices the paintings in the room. He asks what Patrick does; he tells him software and that to never take his work home with you for a happy life. Aaron calls someone to let them know about the paintings he saw in the room, now everyone is leaving. Aaron offers to take Kim home, but she’s not up for that. Aaron thanks Teresa for the party and ends up leaving; she locks the door and then goes up stairs looking for Patrick saying that everyone is gone. Teresa finds a man in the room with the paintings and tells him the party is over, he asks about the paintings; Teresa tells him that her boyfriend will arrive and let him know. Patrick says they’re fake as he arrives; the man introduces himself as McKay a man who owns a restaurants and is ex-military. He knows that they’re all stolen, the paintings in the room; Patrick tells her that he’s one of them. McKay acts more direct saying that they’re drifters; McKay says he’s got no competition because Texas is his territory. Patrick says that he thinks this place isn’t big enough for the both of them, they decide let McKay in on the plan instead of getting hurt badly.

It cuts to Teresa walking around the giant house, she sees Patrick lying on the sofa asleep; she covers him in a blanket and walks away. Pike gets a call from Teresa, she’s checking in before going to bed; they will turns off the cameras in the house. Teresa mentions how she’s starving, Pike tells her about a pancake place near her place. Looks like Pike is trying to put the moves on Teresa. Abbot tells Kim good job on getting Aaron to the bedroom, she says it was easy. Turns out that Kim needs to get a marching band for Patrick. Patrick and Teresa leave their house to meet with McKay, they’re drive away from the house and arrive at a museum. Patrick talks about a painting that they’re going to steal, and that they have a buyer for it already; McKay wants to cut it 50/50. There is more than just stealing a painting, it turns out that Aaron is going into the fake house of Patrick and Teresa’s to go upstairs and steal the paintings of course while they’re away with McKay. Aaron is looking everywhere for the paintings, but none of them can be found. Aaron finds a button behind a dresser, he presses it and a safe appears on behind a hidden wall. Patrick and Teresa arrive back at their place after their meeting with McKay. McKay meets up with Aaron after to ask about the paintings, because they hid them all. Now they are going to hit them, it’ll take four minutes to go in and out.

Aaron and McKay are getting ready to steal the paintings from their house now; they arrive in a white mailing truck with guns and a sledgehammer. They arrive and have Patrick and Teresa at gun point, they ask Patrick to go upstairs with them. A knock is heard at the door, the man who was left behind with Teresa looks behind him and as he does Teresa picks up a gun and aims at him telling him not to make a sound. Abbot and Cho arrive at the door. Patrick is with Aaron and McKay upstairs, they’re stealing the paintings after getting the safe opened. McKay doesn’t like the look on Patrick’s face and finds a tracker on the paintings. McKay wants Patrick to stay there for a full minute after they leave, as the go downstairs with the paintings they are caught. McKay kicks Aaron down the stairs to escape; he goes back to the room and finds Patrick missing. He jumps out from the window and begins running away to make his escape, Cho is chasing after him. McKay hides behind a dumpster and isn’t found, Cho runs right by him. McKay begins running away again; he slows down and removes his gloves. In front of McKay is a marching band, so he takes a different route down a narrow path instead, when he gets out of it a taxi shows up and he asks for him to drive him to a location. Wiley is the taxi, he drives McKay to the destination. McKay enters his hideout; inside his hideout are many pieces of art that are stolen. Cho and his team arrive at the hideout and arrest McKay. Abbot and Patrick are interrogating McKay, telling him that they need nothing from him because they know he’s the culprit for killing John.  Patrick lets McKay know that the garbage truck and the marching band were planned. Patrick gets up and leaves, Cho, Kim, Wiley, Pike and Teresa are having some case closed pizza. Pike begins to start putting the moves on Teresa, wanting to go grab pancakes with her, Teresa is about to turn him down, but he puts on his Pike charm. Patrick meets with Sylvie; he got the painting of herself that her husband painted. Patrick is one hell of a good guy; he arrives and asks where they are going to Pike and Teresa. Pike is about to answer, but Patrick tells them to go out and have fun. Patrick sits alone on his sofa, looking a little alone.