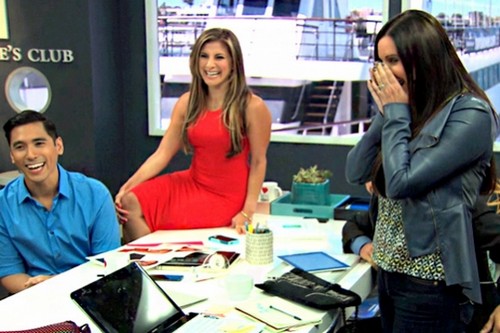 Tonight on Bravo The Millionaire Matchmaker returns with a brand new episode.  On tonight’s show called, “Mr. Superficial and the Nut Job Magnet,”  and on tonight’s episode Patti tries to get millionaire Robbie to change his shallow ways and her client Dane to filter out the crazies.  Did you watch last week’s episode?  We did and we recapped it right here for you.

On last week’s episode Rosie Pierri was a 46-year-old Furniture Project Manager whose sister, Kathy Wakile, was on The Real Housewives of New Jersey. Patti’s second millionaire last week, Andrew Christian, 35, was a famous underwear designer who was looking for his special mate. A double gay episode as Patti and her new assistants looked for appropriate gay men and lesbians for their two famous clients!

On tonight’s show forty seven-year-old Robbie Mione is a successful former optician with many rich clients.  Now a man of leisure, he’s looking to get married but his superficiality and jokes keep him from connecting with women.  Will Patti get Robbie to change his shallow ways long enough to find a mate? Patti’s second millionaire this week is Dane Dunn, a 37 year old who lives in Orange County.  He is an entrepreneur, owns several gyms, and has two kids from a previous marriage.  Since his divorce, Dane says he has attracted only ‘nut jobs.’  Can Patti teach Dane how to filter out the crazies so he can start dating a woman who is wife material?

Tonight’s episode is going to be another drama packed one, which you won’t want to miss. So be sure to tune in for our live coverage of Bravos’ The Millionaire Matchmaker Season 7 episode 6 – tonight at 8PM EST! While you wait for our recap, hit the comments and let us know how excited you are about the new episode of TMM tonight.

Justin has made a video for Patti’s website. It’s a hilarious video created from a tons of clips of Patti talking about her no sex rule. Cute, but she needs her staff to get back to work. Easier said than done when later both she and Justin are injured over the weekend. Now they have to move past their obvious pain in order to help their clients. The first client of the day is Robbie Mione. Robbie Mione is 46 years old and does want to get married. He opened a chain of stores before selling it and his house in order to live a life of leisure. As in he loves to travel and considers a hotel to be his home. He was formerly married for 10 years and unfortunately he grew apart from his wife. There was no cheating on either side. It’s been 9 years since his divorce and he’s ready to settle down again.

What’s stopping him is that he’s a jokester. He’s constantly making jokes about anything and everything. Patti believes all these jokes are a way to hide his personality. She thinks his divorce hurt more than he’ll admit and that’s why he only wants to date women in their twenties. Patti wants him to date a little bit older seeing as she senses these young woman are a way for him to not to reveal too much about him. A girl in her 20s dates someone nearly 50 not necessarily because of his conversation skills.

Patti’s next client will be as equally as hard as Robbie. Dane Dunn at 37 is also divorced and looking forward to moving on. He’s the father of two and when he had caught his wife, used to be his high school sweetheart, cheating on him and quickly divorced after that. Whereas Robbie liked to date young Barbies; Dane like the wild girl prototype. Patti hates the wild girls. She feels there is nothing more than drama queens. Dane’s ex-wife wasn’t a drama queen and yet since the divorce all he’s been dating are nut-jobs. He’s concentrating so hard of finding his ex’s opposite that he’s fallen into the crazy category. Patti is going to fix that however she warns Dane that she’s going to throw a wild card at his mixer. She doesn’t generally warn them beforehand, but she did with Dane.

The vetting process was full of eligible women. Patti and her team even found women that could work for either of the guys. Later at the mixer, Patti has thrown a wrench into Robbie’s dating life. She had finally gotten him to reveal his hobbies. Before he thought lying around the pool was an activity. After Patti pressured him; he remembered how much he loved music. He possibly even wants to create music with someone else.

Just to make sure Robbie doesn’t make a fool of himself; Patti attaches him to a shock collar. She did end up using the remote to it several times during the mixer. Robbie just couldn’t stop him from making jokes. Towards the end of the mixer, Patti and her people pulled the millionaires aside and asked them for their top two choices. They were going to be given several minutes alone with the top two in order to figure out who would be their master date. Dane enjoyed meeting both women while Robbie had the harder time of it. It seems he met one of his choices already and didn’t remember her. Later when it came time to pick their dates, Robbie tried to pick the girl he forgot and she turned him down. He couldn’t fall back on his second choice because Emily had agreed to a master date with Dane. Patti had to pick Robbie’s master date. And in spite of being technically a third option, Lindsie agreed to be open-minded.

Robbie is lucky. Lindsie is everything he could have ever wanted. She’s beautiful and funny. The only reason he had overlooked her was because he naturally gravitated to a model and waitress over someone less Barbie. While Lindsey enjoys the date as well. She likes to be wooed and Robbie does great job at being romantic. They both agree to a second before the first was over.

As for Emily and Dane. They enjoyed themselves and had some light flirting. Dane tried to make a second date and Emily kind of blew him off. Dane hasn’t given up though and keeps trying to pin her down and yet when Emily spoke to Pattie; she made it seem like she couldn’t wait for the next date. Patti sees that Dane is losing interest and decides to step in. She calls Emily and puts her on speaker so that Dane could hear Emily’s response. Emily keeps lying. She says work is the reason why she kept ditching Dane. Patti called her on her bull and dropped her as a client. She then reassures Dane that she’ll keep looking for a girl for him. Patti may have had a bust with Dane yet Robbie turned out to be easier.

Robbie had much better match and sure he slightly broke the rules by fooling around with Lyndsie, but he agreed to a monogamous relationship with her by then. As of recently the two are still in a relationship.