The Mysteries of Laura Recap “The Mystery of the Dysfunctional Dynasty”: Season 1 Episode 9 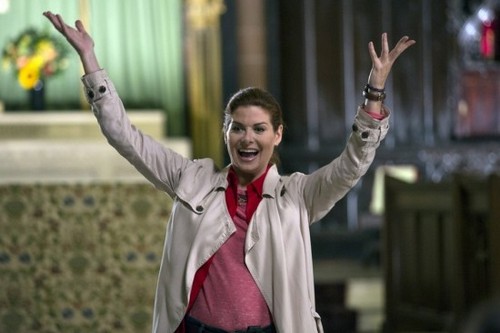 Tonight on NBC The Mysteries of Laura continues with an all new Wednesday November 19, season 1 episode 9 called, “The Mystery of the Dysfunctional Dynasty.” On tonight’s episode religious motives are suspected in a couple’s murder. Meanwhile, Laura [Debra Messing] and Jake [Josh Lucas] look for a new nanny and encounter a familiar face in their search.

On the last episode, when a woman is found dead on a party bus, Laura and the team took on a beauty empire and its leader to uncover the truth behind the murder. Meantime, an annual mud race created some friendly competition amongst the detectives of the 2nd precinct. Did you watch the last episode? If you missed it, we have a full and detailed recap right here for you.

On tonight’s episode as per the NBC synopsis, “when a couple is found murdered in their apartment, Laura and the team investigate to determine if a religious motive was at play. Meanwhile at home, a familiar – if not so friendly — face visits Laura and Jake during their search to find a replacement nanny for the boys.”

We will be blogging The Mysteries of Laura season 1 episode 9 with all the up-to-the-minute details at 10PM EST so make sure to come back to this spot and watch the show with us. Make sure to refresh often so you get the most current info! In the meantime, sound out in the comments and let us know what you think of the series.

Tonight’s episode of Mysteries of Laura kicks off with a little girl chasing her dog into her neighbor’s apartment.  She follows her dog in to the old couple’s bedroom and finds them both murdered and covered in blood in their bed.

Laura is getting her kids ready to go to their Grandpa Leo’s because they don’t have school.  Jake shows up and announces he has found them a nanny named Alicia.  She arrives on the doorstep and Laura and Jake realize it is the same woman form the park that yelled at them because the boys were peeing in public.  She sits down with Laura and Jake for an interview.  They receive a call for a homicide and rush out of the house.

Laura and Jake arrive at the elderly couple’s house and learn that their names are Jack and Evelyn McKorsky.  They think it may have been a robbery because there are some obvious items missing.  Laura sits down with the little girl that found the couple and learns that Evelyn muttered the name Daniel before she died.  The little girl has no idea who Daniel is, but she says there was a man at their house yesterday with a big box dressed in white.

Max gets a lead and reveals that the McKorsky’s hired a painted named Matthew to do some work on their house, and he has a rap sheet.  Laura and Billy head to Matthew’s job, he’s wearing a Rolex and Laura can tell that it belonged to the murder victim.  They bring Matthew in for questioning and he confesses that he stole Jack’s watch the one day when he was in the shower.  He has an alibi for the night that the McKorskys were killed – but he says they used to frequent the Hudson Senior Center.

Laura and Billy head to the senior center and meet with the activities director.  She says that Evelyn and Jack got along with everyone, but there was a sleezy lawyer who used to always show up and try to confuse them and get them to sign papers.  They get the lawyer’s name and check him out at his office.  He says he was handling the McKorsky’s will for them, and while Billy looks over their will Laura gives the lawyer some cream for his bug bites.

The lawyer reveals that they had just re-did their will and wrote their son Daniel out of it.

They head to Daniel’s apartment but he has packed up and left.  They find a brochure for a church in the garbage and realize that Daniel scribbled on Pastor Bob’s face.  Laura and Billy visit Pastor Bob, he said that he knew Daniel but he was “disturbed” and “preferred the company of men.”  That’s why the McKorskys disinherited Daniel and left the money to the church.  Bob says the last time that he seen Daniel he had his boyfriend with him and gives them the address where they can find him.

Meredith head to the boyfriends house and see Daniel and him walking up the stairs.  Daniel makes a run for it, but Meredith manages to run him down and catch him and cuff him.  They bring Daniel and his boyfriend in for questioning and they both have alibis, but they think that Kasib may be responsible.  Kasib is a man from his country that is upset because Daniel is gay and isn’t marrying his sister.

Meredith and Billy track down Kasib and he insists he is just in NYC to take his mother shopping and then he is going back home.  He refuses to answer their questions, but Meredith notices that his bodyguard is carrying golf clubs – which is what they think the McKorskys were killed with.  Laura and

Max go shopping and track down Kasib’s mom.  Kasib’s mom agrees to help Laura, and gets her team in to Kasib’s hotel suite.  They steal one of his golf clubs and send it to the lab and there are traces of Jack and Evelyn’s blood on it.  Laura squeals that “Kasib is going down.”

They bring Kasib in for questioning and he denies killing the McKorskys.  He says he left the golf clubs at the country club over night and anyone could have used them.  He also complains that he has bug bites from the golf course – Laura remembers that the McKorsky’s sleezy lawyer Russell had bug bites too.

Laura brings in Daniel and Russell and realizes that they were conspiring against the McKorsky’s and Russell was in serious debt.  He couldn’t wait until they died to get the money from the will so he went to their house and killed them with Kasib’s golf clubs so he could get their money sooner.  Russell insists that Laura doesn’t have a case – she orders him to get a lawyer, a real one.

After work Laura and Jake head home, Jake informs Laura that Alicia called her and said the boys are bad readers – so they have to fire her.  Meredith asks Billy out for drinks, and he agrees.  Laura and Jake arrive at home and their sons are being perfect angels and coloring.  Alicia announced that their homework is done and they already took baths and brushed their teeth.  Laura is blown away and tells Jake that he can’t fire her if he values his life.