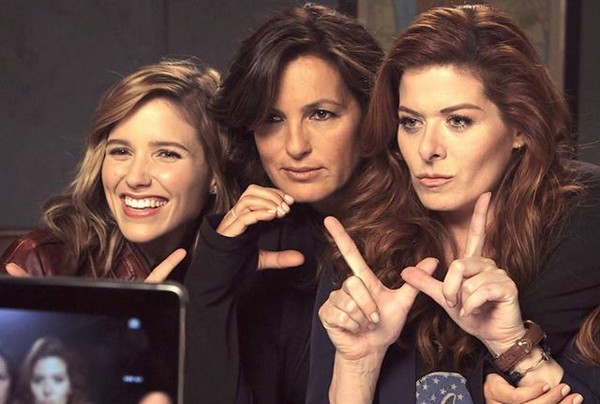 Tonight on NBC The Mysteries of Laura airs with an all new Wednesday September 24, season 1 episode 2 called, “The Mystery of the Dead Date.” On tonight’s episode online dating leads to a woman’s murder, so Laura tries to bait the killer by using an Internet dating site and going to nightclubs undercover. She also considers getting back into the dating scene for real after Jake finally signs their divorce papers.

On the last episode, in the series premiere of this comedy-drama, a talented New York City homicide detective struggles to balance her demanding job with her hectic home life, which includes rambunctious twin boys and a husband who’s reluctant to sign divorce papers. Did you watch the season premiere? We recapped it all right here for you.

We will be blogging The Mysteries of Laura season 1 episode 2 with all the up-to-the-minute details at 10PM EST so make sure to come back to this spot and watch the show with us. Make sure to refresh often so you get the most current info! In the meantime, sound out in the comments and let us know what you think of the series.

Billy brings the suspect in for questioning, he says that he saw on the internet that if you “shove a firecracker up a squirrel’s ass it will take off and be airborne.” Billy is confused, he says “wait a minute, you’re confessing to killing a squirrel?” The suspect bursts in to tears and begins sobbing because he didn’t know that the squirrel had died. Laura is baffled, she doesn’t understand how this idiot actually had two women fighting over him.

Laura’s sons arrive at the police station and her husband/boss informs her that she is on kid duty tonight because he is taking all of her co-workers out to for a beer. Max reveals that the dating website wouldn’t give out any information of the members on the site. So, Laura announces that she is joining the site and is going to make her profile similar to the victim Kristen’s and see if the killer invites her on a date.

Jake heads to the bar with Billy, and Jake thinks it is a work date. But, Jake wants to talk about Laura, he thinks she should give him another chance. Billy doesn’t want to get involved, two girls approach them and invite them to play foozeball with them. One of the girls kisses Jake and Jake gives Billy the “don’t you say a word” look.

The next morning Billy arrives at the station the next morning hung over, Laura announces she has twelve dates from the site and Jake volunteers to tag along. But, Laura shoots him down and says that she will take Billy. Later Laura gets dressed up and heads to the bar where all of her dates are meeting her. A nerdy guy approaches her, but she lies and says she isn’t Laura. Billy says that was cold, but she insists that there was no way he is a killer. Laura’s next date arrives and she shoots him down as well, she complains to Billy that her feet are killing her and she is looking for someone with a hot temper. Laura gets lucky with her next date, Kevin, and recognizes his cologne from the crime scene when she hugs him. Billy chases after him, but he gets away. While they are trying to leave the bar an old man approaches her form the site but she says that she met someone, and kisses Billy.

Laura makes friends with a bizarre criminal in the holding cell named Sam, she was brought in for protesting her slumlord landlord, who is also her father. Sam tells her that the best way to get in contact with Kevin is to send him a kissy face message on the dating site. Laura gets Kevin to agree to meet her in the dark park. Kevin begins freaking out and says that Laura reminds him of someone he knew. Billy jumps out of the shadows and arrests Kevin.

At the police station Kevin admits that he had a date with Krista Chase, the victim, but she texted hi and blew him off at the last minute. He has an alibi and can prove he was at a boy band concert. He confesses that he pays a guru $3000 a month to find him dates and he even picked out Kevin’s cologne. His guru set up his date with Kristen.

Laura and Billy sit up all night researching Kevin’s guru Michael who helps men land “Dwarves,” divorced and desperate single women. Jake says that Laura can’t pick him up because she doesn’t have enough evidence. She found a woman online that left comments on Michael’s website that he should burn in hell, and she emails the woman and meets up with her. The woman admits that she met up with Michael and he took her to a hotel room and raped her.

Laura heads back to the police station and fills Jake in, she announces that she has a date scheduled with Michael. Jake argues that it is too dangerous and she screams that he needs to stop acting like a husband and start acting like her boss and help her catch a kill. He caves and allows Laura to meet Michael at the bar. Billy and Jake go in to the bar undercover, she slips them Michael’s phone and they find text messages with him making arrangements to hook up with her the night that she was murdered. They give Laura the signal that he is the guy and she makes the next move and invites him to leave with her. Michael takes her back to his apartment and she texts the address to Jake and Billy.

Laura thinks that Jake and Billy will barge in any minute, but they are locked out of the apartment building and need the electric company to cut the power so that they can get through the gate. Meanwhile upstairs Laura takes down Michael, but then the power goes off and Michael jumps on her and starts strangling her. Luckily Jake and Billy rush through the door and arrest him.

The next day Billy pays Jake a visit in his office and threatens him that he doesn’t want to know what he does outside of the office, and at the end of the day if he has to choose between Laura and Jake, he knows who he will choose. Laura interrupts, and Jake tries to tell her about the girl at the bar. He says that she came on to him and he didn’t sleep with her, because of Laura. Laura doesn’t want to hear it, she jokes that she has a hot date of her own tonight, and then goes home and lays down her sons.