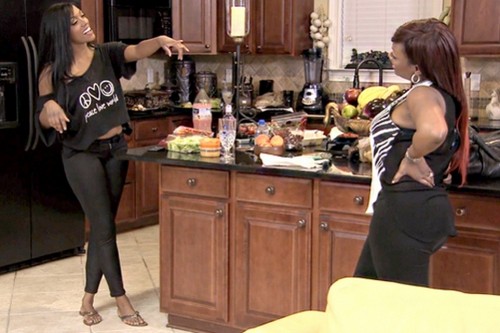 There is so much craziness happening right now on The Real Housewives of Atlanta that it’s almost tough to keep track of who is fighting and all of the reasons why! The show is back tonight with an episode called, “Secrets Revealed.” On tonight’s episode previously unseen footage from “The Real Housewives of Atlanta” is presented. Included: NeNe dining with a costar from “Glee”; and clips of Kandi and Momma Joyce.

On last week’s episode of real housewives Apollo joined the women to address rumors about him and Phaedra and his alleged ran in with the law. NeNe and Kenya went head-to-head in a battle of the titans, plus, the rest of the husbands joined the mix to offer their thoughts on all of the ups and downs of this season.  Did you watch last week’s episode?  If you missed it we have a full and detailed recap, right here for you.

On tonight’s episode The network will air a “Secrets Revealed” special, which will feature NeNe dining with one of her Glee co-stars, unseen footage of Kandi and Momma Joyce, and more of the aftermath from the couples Pillow Talk night.

Tonight’s episode of Real Housewives of Atlanta’s “Secret Scenes” kicks off with Andy Cohen analyzing the friendships that have come and gone on the Bravo reality series.

First Andy shares a clip of Nene and Kenya riding in a car and discussing Kenya’s new boyfriend that she met in Africa. Kenya proclaims that sometimes when you’re in a long distance relationship you need to “open your laptop and open your legs.” She also brags to Nene that she is a “Size Queen” and “she doesn’t kiss and tell but when she does kiss something it is big,”

Next Andy touches on the relationship between Kandi and Porsha. Kandi jokes that she has never met someone with so many different business ideas, and Andy shares of RHOA clip of Kandi describing to Porsha her hair business, singing career, and teeth whitening business. In the clip Kandi gently tries to encourage Porsha to focus on just one project at a time and set deadlines for herself.

The next secret RHOA scene to be revealed features Kenya modeling for Cynthia’s calendar shoot to promote her business. Before sharing the footage Kenya proclaims that her shoot was “comparable to Beyonce.” After the clip Kenya announces that she “admires” how professional Cynthia is.

The next secret scene to be share don tonight’s special episode was shot in the hospital after Phaedra’s emergency c-section. Apolla took their toddler Ayden out in the hallway to discuss with him what it was going to be like to have a baby brother, and Phaedra pondered over how hairy her newborn was and what they should name him.

The next secret RHOA scene reveals a never before seen clip of Kenya and her GBF gossiping about Phaedra and Apollo. Kenya is planning the trip to Mexico and has even bought a tiara for Phaedra to wear on her birthday, and giftbags for the other girls.

Next, Andy brings up Cynthia’s friend Natalie and all of the drama that she brought to Real Housewives of Atlanta. In the secret clip Cynthia meets up with Natalie the day after Pillow Talk Fight Night, and Natalie blames Kenya for her part in the brawl. And, Natalie thinks that she has done no wrong- she never would have gossiped about Todd if the girls didn’t keep asking her about him.

Andy shares a reel of “Mama Joyce Moments” which kicks off with Kandi and Todd trying to have dinner with Joyce, and she informs Todd that she thinks he is “thrifty” and saves his money by spending Kandi’s money. Mama Joyce’s clip also includes Kandi and her Mom at therapy with Dr. Sutherland.

Nene, Phaedra, and Chuck’s infamous car ride from Athens is the next secret scene on the agenda tonight. Afterwards Phaedra confesses that she was scared Apollo was going to over-react and try to fight Chuck Smith because of her history with him.

The final secret scene is a hilarious clip of Kenya filling Cynthia’s husband in on her beef with Cynthia’s sister at her trunk show.

Next up on Bravo is a special half-hour episode of “Kenya Tells All.” Andy Cohen sits down with Kenya and she dished on all the behind the scenes drama that we never got to see. Andy kicks the special episode off by asking Kenya how she feels about the majority of RHOA fans taking Porsha’s side in their feuds. Kenya insists that that she doesn’t believe in any way that she bullied Porsha. According to Kenya, it is “silly” to think that she brought the bullhorn to the reunion to antagonize Porsha. As far as Kenya is concerned, Porsha began the argument by stating she had proof that Kenya offered Avant to pose as her boyfriend for $40,000.00

Andy shows Kenya a clip of Porsha after the reunion, and Porsha proclaims that she deserves an apology from Kenya. Kenya doesn’t want to hear it, Porsha is playing the victim and thinks that it was okay to physically attack Kenya since Kenya was allegedly provoking her with the bullhorn and scepter she brought on the reunion.

Kenya calls Andy out and says that Bravo stacked the deck against her and the reason that people are taking Porsha’s side is because the producers aired clips of Porsha being bullied, and they didn’t show any flashbacks of Porsha instigating any arguments and bullying other people.

Kenya confirms that she is going forward with her lawsuit against Porsha after she attacked her on the reunion, as far as she is concerned Porsha broke the law and the court can decide her punishment.

Next Andy questions Kenya about her relationship with Nene Leakes. Kenya believes that Nene is threatened by Kenya’s “existence on the show.” As far as Kenya is concerned she is “good for the show” and Nene is envious because since Kenya joined RHOA ratings have been steadily increasing.

Andy asks Kenya what she thinks is the biggest misconception about her on RHOA, and she reveals that she thinks her co-stars and fans at home forget that she is a human being and she has feelings, she’s not a machine.

Next Kenya reveals to Andy that on June 2nd she is headed to her first IVF treatment, and she has found a sperm donor, and it is someone that is already in her life. Andy asks her if the sperm donor is the African Prince, and Kenya teases that we will all have to “wait and see.”