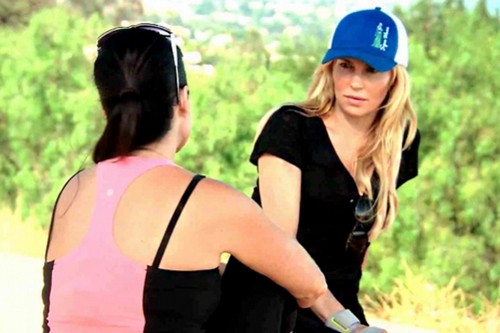 THE REAL HOUSEWIVES OF BEVERLY HILLS returns to Bravo tonight for a whole new episode called, “Trail of Doubts.”  On tonight’s show Brandi confides in Kyle, while Carlton uninvites Kyle to her party.  Did you watch last week’s episode?  We did and we recapped it right here for you.

On last week’s episode Joyce confronted Carlton about potentially putting a spell on Joyce’s husband — which Carlton vehemently denied. Lisa and Kyle planned a joint birthday party for their husbands, but the party devolved into drama when Carlton brings up the ways in which Kyle had offended her.

On tonight’s episode Carlton oversees a party for her husband’s business, a party to which Kyle is no longer invited. Brandi confides in Kim and Kyle that she is having serious doubts about her friendship with Lisa.

Yolanda is planning a going away dinner for her daughter, Gigi. Gigi wants a traditional Arabic dinner and what better place to hold such an event than at her father’s house. They don’t usually hold the kids parties at Muhammad’s house because the kids feel is too grand but this will be the final celebration for Gigi before she across country to attend college.

Yolanda is already missing her daughter and now she has the added pressure of having to deal with Lisa’s antics. Not only did Lisa plan a belated birthday party on Yolanda’s family occasion but she also conveniently forgot the reception was at Muhammad’s house and tried to invite to her dinner. Muhammad doesn’t think any of it. He figured she probably forgot but Yolanda is suspicious. Lisa doesn’t let things lie that slip past her and Yolanda is now wondering what game her supposed good friend is playing.

Everyone wants to play games. After the birthday party went south, Kyle pretty much guesses she wasn’t going to be invited to Carlton’s family’s business event. Yet she hadn’t counted on Carlton extending an invitation towards Kyle’s husband and not her. It was an insult and Kyle feels she doesn’t have to play these childish games. Nott when she has her own kids to worry about. Their teenage daughter managed to convince them to letting her go on a weekend trip with a couple of friends. Kyle was anxious but her husband said to let the kid go. What better way for her to learn responsibility.

Throughout the whole process of passive aggressive fighting with Lisa; Yolanda has chosen to do something more productive. She applied for her citizenship and was able to pass her test with flying colors.

As for Carlton, she’s preparing for her family’s red carpet party. Her husband and his family were able to build a multi-million dollar company and Carlton is extremely proud of their family. She grew up as an only child and has always loved joining her husband’s large extended family. So this was truly important to her. She made sure to work hard on it. With the event underway, Carlton is happy and enjoying herself when Lisa arrives. Carlton did apologize to her for creating a scene however she feels hurt that Lisa( without knowing the full story) though she was overreacting.

Carlton  feels like her whole argument with Kyle was a build up over several instances and after learning about Lisa’s own history with Kyle; she thought Lisa would be more understanding. Lisa then suggests that Carlton and Kyle have a sit down. That isn’t going to happen. Carlton was offended when Kyle called her anti-Semitic. She grew up in apartheid and hates to be connected to that. Also most of her husband’s clients are Jewish. Kyle throwing that tag around could have hurt her family. This is why Carlton will never forgive Kyle.

Lisa leaves the party just as Brandi and Kim arrive. Which was convenient for her because it allowed her to miss out on what the other ladies were talking about. Brandi and Kim have gotten along much better lately and so they opened up to their frustrations with Lisa. Lie Yolanda, they’ve picked up her lack of regard towards their feelings. Brandi wasn’t warned her ex-husband’s mistress was going to be the wait staff at the birthday party. And then she couldn’t understand why Lisa kept trying to make her talk to the younger woman. They don’t like each other and never will. As Brandi’s friend, Lisa shouldn’t have even let Scheana wait that particular party.

Lisa has other staff and yet she keeps throwing the mistress in Brandi face. Kim doesn’t get it either. Lisa has constantly been dismissive to her and she doesn’t know why.

The next day, Brandi went hiking with Kyle. They were talking about Kyle upcoming trip to Puerto Rico with her husband and Joyce’s family and Brandi said it sounded great. So Kyle invited her along. Sure, Brandi isn’t and will never be close to Joyce but it’s a group trip. The two of them have also grown closer since Brandi has begun to notice things about Lisa.

That’s why Brandi asked her how she was able to make up with Lisa. Because with the way things are between her and Lisa right now; Brandi has begun to second guess everything their friendship stood for. She’s only just now realizing how much Lisa manipulated her into saying and doing things she never wanted to do. And frankly Brandi is scared about going up against Lisa. She knows her former friend is much too smart to let Brandi get away with these accusations.