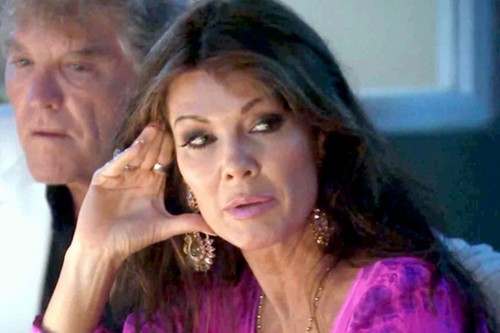 THE REAL HOUSEWIVES OF BEVERLY HILLS returns to Bravo tonight for a whole new episode called, “Lines In The Sand.”  On tonight’s show the women head to Puerto Rico, but a battle royale erupts when the ladies confront Lisa and Ken over dinner.  Did you watch last week’s episode?  We did and we recapped it right here for you.

On last week’s episode Kyle and Joyce decided not to invite Carlton on their Puerto Rico trip, especially after Kyle revealed how she received strange, spooky words on her computer screen saver. Brandi tried to avoid Lisa at Gigi’s glamorous going-away party. Kyle mistakenly revealed to the group that Joyce’s father had died and Joyce felt betrayed.

On tonight’s episode All the ladies, except Carlton, head off for a vacation in Puerto Rico. The relaxation doesn’t last long after Yolanda and Brandi confront Lisa about the doubts they have regarding their friendships. A battle royale erupts over dinner, and Lisa and Ken leave the table, calling it a sabotage attack.

The vacation is going through. Joyce felt what better way to honor her father than by showing the rest of the girls the beauty of his country. Her father hated what he would call pity parties and that’s why she didn’t want to sit at home and moped about. But as Lisa pointed out these ladies never go through a vacation without someone causing some sort of drama. So Joyce might soon wish she had just stay home.

It’s more than a coincidence that many of the people going to Puerto Rico have beef with Lisa. In the last few weeks, Lisa has inadvertently burn bridges left and right. Why? Because no is buying her “lady” routine and so even her friends have begun to look at her actions instead of merely buying whatever story she’s peddling that week.

Yolanda has found herself getting burned by Lisa when her supposed close friend invited her ex-husband to a party when she fully knew that he was both attending and hosting Yolanda’s stepdaughter’s wedding. As for Brandi, she hasn’t heard from Lisa in the longest. Before Lisa got back together with Kyle, the other woman used to call Brandi every day and now she’s not returning phone calls. And lastly there is Kyle. Kyle tried to talk it out with Lisa was told in no uncertain terms to drop it. Now all of these women want answers.

They arrive in Puerto Rico and all appears to be well. Brandi for her part is swallowing all the things she wants to say. And it wasn’t until Joyce left the rest of the group to go be with her family that the drama got addressed. Yolanda confronted Lisa. She asked Lisa about Kyle because neither she nor Brandi knew the two were getting closer and they have some questions. Like did Lisa at least clear the air first by admitting to all the crap she’s tried to pull with Kyle.

Rather than answering though Lisa gets on the defensive and claims she and Kyle aren’t close and no she isn’t trying to replace Brandi with her old frenemie. But she isn’t giving any clear answers and is constantly trying to blame others than have honest conversation. Lisa eventually walks away after Kim, Kyle, and Brandi come into the conversation. She goes to her husband and isolates herself from everyone else.

Well, Brandi has had it with her former BFF and she confesses to Kyle that Lisa once tried to sneak in a few tabloids that had articles about Kyle’s “broken” marriage into the girls Palm Springs vacation. Brandi had refused to carry it for Lisa and so the tabloids never made the trip and yet it’s the fact Lisa was willing to stoop that far that gave her friends the chance to check themselves. Yolanda was there and didn’t like it. She soon made peace with Kyle afterwards because of what she saw.

Yolanda tried to speak to Lisa again and Ken got an attitude with her. He did what he usually does and got in women’s business. He tried to reprimand Yolanda as if she was a child and she didn’t like it. She walked away and Brandi went with her.

The tabloids thing slowly becomes a bigger issue. It ticked of Mauricio and left Kyle in tears. She had asked Lisa about the magazines and was basically lied to. Lisa denied ever seeing the tabloids in the beginning and then saying she saw it when they had come back from vacation. She’s good at flip flopping. Only this time no is willing to listen to the many variations of her story.

Brandi’s main issue with Lisa is that she kept throwing Scheana in her face. She found out after the fact that Lisa and Scheana have been close friends for the longest and feels like Lisa used her for publicity. Although she wouldn’t lie to get back as Lisa for it. That’s why Kyle is more inclined to listen to her.

Joyce and Michael rejoin everyone for dinner and in spite of not being there earlier; the couple has picked up on the tense atmosphere. Yet no one could miss when everything went belly up. Kyle asked Lisa right a there at the table to explain her side of the story with Brandi and Yolanda there. As she starts saying her side, Ken intervenes and that makes Kim finally snap. She’s tired of Ken always attempting to outshout the women and so told him to shut up. Let Lisa defend her own actions.

Ken and Lisa leave in a temper. They’re angry at Kyle and Mauricio for buying the story and their angry at the other women for “attacking” Lisa. They don’t how they could be wrong while the other side can concede that maybe Kyle should have talked to Lisa without a group. Anyone could feel like they were targeted if it’s a group all talking at once.