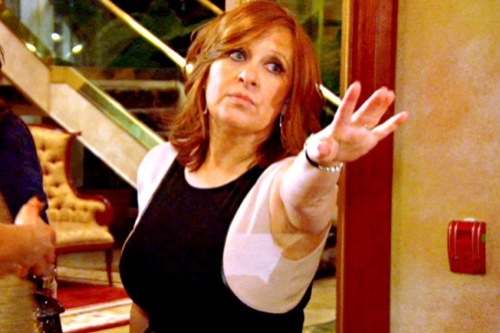 Tonight on Bravo The Real Housewives of New Jersey starring Teresa Giudice and the rest of the housewives return with an all new Sunday October 12, Season 6 episode 13 called, “Sorry, Not Sorry.” On tonight’s episode Back from their explosive trip to Florida, Teresa and Rino plan a tasting party to launch their new restaurant, but several names are conspicuously absent from the guest list — Teresa Giudice and Amber.

On the last episode the conflict in Florida heated up as Jim had a difference of opinion with Dina, Melissa, and the twins as the shocking rumor about the twins’ family was revealed. Back in Jersey, Teresa and Joe felt the weight of their legal situation and plan a getaway to New York City, while their estranged friends Chris and Jacqueline struggled to keep the spice in their relationship. Did you watch the last episode? If you missed it, we have a full and detailed recap right here for you.

On tonight’s episode back from their explosive trip to Florida, Teresa and Rino plan a tasting party to launch their new restaurant, but several names are conspicuously absent from the guest list — Teresa Giudice and Amber. With her Ladybug event only weeks away, Dina takes it upon herself to get Teresa to apologize to the twins for spreading the rumor, but getting Teresa to apologize could be a fool’s errand. Meanwhile, Melissa questions Amber about her home life with Jim, and Nicole meets Jacqueline for the first time.

Melissa and Amber meet for drinks and Melissa says she doesn’t blame her for Jim’s behavior at the party. “He was Adolf Hitler for a day,” Amber says. Melissa asks her if he is usually like that and if everything is okay at home, which Amber confirms it is. Melissa tells Amber to talk to Nicole at the Ladybug event because no one will be able to start a scene at a charity event.

Nicole still isn’t happy with the way Bobby handled the situation in Florida. Meanwhile, Bobby says that he sees himself spending the rest of his life with Nicole. Nicole tells the girls about the rumor and the fight with Amber. Jacqueline doesn’t want to get involved in the drama. The girls tell Nicole that she shouldn’t be repeating the rumor and should let it die.

Dina, Amber and Teresa G. later discuss the drama as well. Dina feels bad that she kicked Amber out of the house. ‘It’s not her fault her husband is a dick, and I want to make sure we’re on the same page for this event,’ she says. She apologizes to her and they discuss the situation. ‘Like I said, my focus right now is my Ladybug event, and I’m happy everyone is able to put their situations aside to help.’

Melissa arrives, and Teresa A. calls her from Nicole’s phone to invite Teresa G., her husband and Dina to a tasting party. She is on speaker phone so Teresa A. and Amber hear that Amber isn’t invited.

Teresa wonders why anyone is mad at her about the rumor, claiming she isn’t the one who started it. Dina tells Teresa G. that she won’t let anyone speak badly about her in her presence. She says the girls may be dramatic, but they have good hearts and won’t start anything at the charity event.

“My faith has taught me to be very forgiving,” Amber says. She talks about how she and Jim have always been a team. She does a topless photoshoot in a stable to show other women that just because you have had a mastectomy doesn’t make you ugly. Jim goes outside and breaks down crying. Amber wishes the other girls could see the nice, sweet side of Jim.

Teresa G. is still upset about not being invited to the tasting, but says it shows what kind of people they really are.

Tony and Rino volunteer to host the tasting at their home. Teresa is satisfied with the guest list: “No negativity, no drama, no rumors,” she says. Melissa are worried about potential drama at the Ladybug event, because she wants to bring her daughter. She talks to Teresa and she says she wants Teresa G. to apologize and then she will be willing to bury the hatchet. Dina decides she will talk to Teresa G. about it.

“Even though their was this disgusting rumor about my husband, my family, we have a bond like no other,” Teresa says.

Nicole goes house hunting and Bobby comes to accompany her. Bobby says he plans to be engaged to Nicole ‘within the next year.’ Meanwhile, Nicole says she doesn’t know where her relationship will be in one or two years. She admits to having had second thoughts after Florida. “My priority is me and my boys,” she says.

Jim shows Amber a display he set up of the photos from the photo shoot, and they eat a romantic dinner in the gallery.

Dina tells Teresa G. that Teresa is still a little disappointed about the drama, saying that sometimes even if you didn’t do anything wrong, you need to be humble in order to solve a situation. “Listen, I have a lot on my plate right now,” Teresa G. says. “This should have ended in Florida.” “Dina should have definitely come to my defense more,” she adds. She tells Dina she’s not bowing down to anyone for something she didn’t do. “Sometimes in life it’s better, whether you think you’re wrong or not, to just apologize,” Melissa says.