The Real Housewives of Orange County Recap 6/23/14: Season 9 Episode 10 “Skunk in the Barnyard” 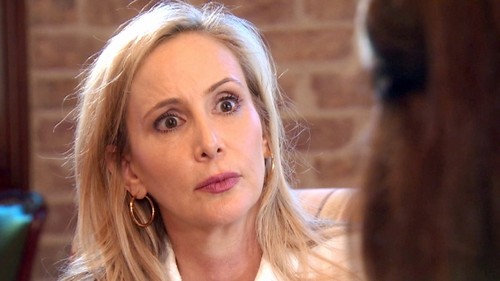 The Real Housewives of Orange County returns to Bravo tonight. On tonight’s episode called, “Skunk in the Barnyard”, while confiding in Tamra, Shannon receives a text from David that rumors are swirling around the OC about their marriage.

On the last episode Tamra revealed her real reason for being upset with Heather. Meanwhile, Briana and Ryan surprised Vicki with the gender of their baby and later, Shannon turned to Tamra for support when her husband, David, sent her a shocking e-mail about their relationship.  Did you watch last week’s episode?  If you missed it we have you covered with a full and detailed recap, right here for you.

On tonight’s episode while confiding in Tamra, Shannon receives a text from David that rumors are swirling around the OC about their marriage. Shannon heads to Heather’s house to find out the source of the rumors, only to be turned away. Lizzie is caught in the middle of Shannon and Heather’s argument and left to decide who to believe. Meanwhile, Vicki and Brooks head to Puerto Vallarta for a much needed vacation and Tamra orders a robotic baby to show Eddie what it’s like to have a newborn.

RECAP: The secret is out about Shannon’s marriage and now the only thing everyone wants to know is who told?

Heather was overheard discussing Shannon’s broken marriage to a group of ladies. And because Tamra completely denies ever telling anyone much less Heather about the email – Shannon has to find the answer herself. So she went back to the original agreement she made with Heather long ago. They had agreed to calmly discuss whatever was bothering the other person to each other. In other words no more intermediaries.

Shannon stopped by Heather’s house for a quick visit. Truthfully, she didn’t want to argue or accuse Heather but she did want to know where Heather heard about the email. Then her question turned into an Inquisition once Heather started in about the Christmas Eve party. Heather thought Shannon showed up at her door to make a long overdue apology. So when she realized Shannon only wanted something from her their “talk” did escalate into something worse. Shannon wanted answers and she had to drag them out Heather.

So Heather met aggression with aggression. She denied talking about Shannon even though they haven’t been on good terms in a very long time. And she felt personally insulted that Shannon would throw all of things at her while her children were upstairs. That’s why she asked Shannon to leave! Shannon may not see it that way but she wasn’t thrown out of the house just because Heather wanted to be mean. The reality is both of them were defending their families in that instant.

The few things Shannon did get from that confrontation was validation that Tamra did at least say her marriage was in trouble. Tamra had called Shannon a kindred spirit. Tamra was also in that position four years ago and she said so to Heather. When it was her, her mar marriage was falling apart and she was drinking way too much. Which made Shannon believe that Tamra was saying she was drinking too much.

Shannon is being overly sensitive about everything Heather said to her. And Lizzie could see that. When Shannon started telling her the story, Lizzie quickly picked up on the fact that Shannon was interpreting things the wrong way. She knows Heather would never be that rude. Plus Lizzie figured out on her own that Shannon should never have gone to Heather’s house in the first place. If she really wanted the truth then she should have went to Tamra. Because Tamra doesn’t know what’s going on.

Tamra is under the impression that she and Shannon are fine. Though she’s smart enough to realize she hasn’t heard from Shannon in a while. So she called Shannon to invite her to talk. Shannon showed up and before she could even ask – Tamra confessed to telling Heather about Shannon’s marriage. She wanted Heather to sympathize and never thought the esteemed Heather would start gossiping.

Meanwhile Heather told Lizzie that she was gossiping. She went to lunch with a group of friends and when some asked about Shannon – Heather told them how the other woman was having problems with her marriage. Then she said that her friends joined in with the things they were hearing seeing as they were rumors circulating.

So depending on who were listening to, Heather is either malicious or occasionally ignorant to what her words can do. And after what she did to Tamra and her husband – Tamra is starting to think that maybe Heather is just cruel.

Because it’s interesting about the timing! Heather was mad at Tamra when she interfered with Tamra’s marriage and she was mad at Shannon when she told people Shannon’s marriage was in trouble. Coincidence?