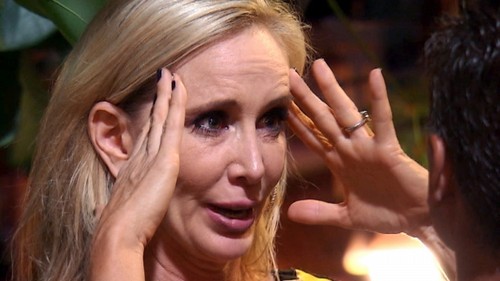 The Real Housewives of Orange County returns to Bravo tonight. On tonight’s episode called, “Who-Hoo-py!”, after being banished from the Dubrow household, Shannon makes a run for the border to join Vicki and Brooks in Puerto Vallarta. Back in the OC, Lizzie’s personal life is put under the microscope as she tries to balance work and family, while Heather hires a personal chef to maximize her time with her husband and children.

On the last episode while confiding in Tamra, Shannon received a text from David that rumors were swirling around the OC about their marriage. Shannon headed to Heather’s house to find out the source of the rumors, only to be turned away. Lizzie was caught in the middle of Shannon and Heather’s argument and left to decide who to believe. Meanwhile, Vicki and Brooks headed to Puerto Vallarta for a much needed vacation and Tamra ordered a robotic baby to show Eddie what it was like to have a newborn. Did you watch the last episode? If you missed it we have a full and detailed recap, right here for you.

On tonight’s episode after being banished from the Dubrow household, Shannon makes a run for the border to join Vicki and Brooks in Puerto Vallarta. Back in the OC, Lizzie’s personal life is put under the microscope as she tries to balance work and family, while Heather hires a personal chef to maximize her time with her husband and children. Meanwhile, Tamra’s experiment of trying to teach Eddie a lesson in fatherhood backfires leaving her the proud single mother of a robot baby.

RECAP: Shannon is getting away from it all. She and her husband are joining Vicki and Brooks in Mexico for what should be a fun vacation. They had a few problems (namely Heather and Tamra) to work pass and so they should want to be each other’s company. But, apparently, they didn’t want to be too close to each other because the instant they saw their room at Vicki’s house they hated it.

It’s too small and the bed is most likely only a double. So they were trying to find a way to graciously give up the room and go to a hotel. That way they could get a king size bed and not be all on each other. Yet Vicki refused to let them leave. She knows all about their problems (thanks again to Tamra) and that’s why she wants to sort of force them to deal with each other.

But the next day, Vicki’s brother ended up giving them his room. It’s bigger and the couple will be comfortable that way.

Meanwhile back in the OC, Tamra is still watching over her fake practice baby. She really wanted to do well with this doll so that her husband could rethink having a baby but Eddie isn’t helping with their very realistic doll. The thing wakes up at all hours of the day and Tamra is taking care of it by herself. It’s like Eddie isn’t even trying to practice.

Lizzie has two small boys herself and her husband never seems to want to help. He thinks it’s her job to be in charge of the children and so he’s slightly resentful of her career. Lizzie started a company and her husband refers to it as if it’s a hobby.

And then there’s Heather. She knows about Shannon’s trip with Vicki and she feels like the other woman is going to once again turn her friends against her. So she turned to Lizzie while the other ladies were away. Lizzie needed advice on how to juggle everything and Heather told her honestly that it’s going to be hard. Husbands look at wives going back to work as inconvenience to themselves. Terry was the same way as Christian.

He and Heather kept having problems because he didn’t like the fact that he had to be helping around the house and that his wife wasn’t going to be home when he returned. Things have changes since then though Heather did just hire a chef so she does have extra help at home. At least more than what Lizzie can currently afford.

Shannon did tell Vicki what happened between herself and Heather though it was paraphrased in her favor. And Vicki sympathized. She knows that what Tamra and Heather did must hurt and yet she told Shannon that she has to go on from here with her eyes open. Shannon doesn’t know what her relationship with Tamra is going to be and Vicki simply warns her that if she continues that friendship then you’re going have to be guarded.

The problem with Shannon is that she keeps saying she’s fine even when she’s obviously not. She said she was fine rather than tell her husband what she’s really feeling. So she takes it out on him in minor ways. Or as Vicki would call it “chiseling”. Shannon chisels away at David instead of propping him up.

Vicki tried to tell Shannon that and Shannon didn’t take it well. She hates it when people see how fragile her marriage is and all advice feels like judgment to her. Shannon is sensitive and whenever she knows she’s been nitpicking her husband and he tell her to lay off – she blames him for making her feel like a bitch. It’s completely irrational!

Unless Shannon and her husband get counseling then they’re destined to get divorced!