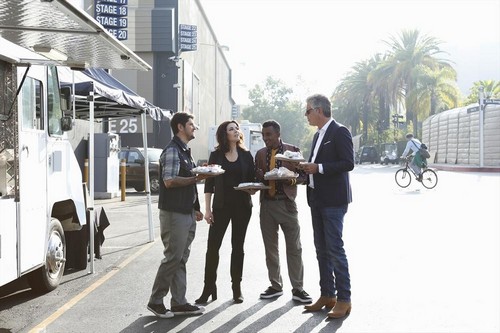 On ABC tonight THE TASTE returns another new episode called, “Street Food.”  On tonight’s show spam is the secret weapon when Chef Roy Choi guest judges a street food-themed challenge.  Did you watch last week’s premiere episode?  We did and we recapped it for you right here for you.

On last week’s episode Caviar, Foie Gras, “Elevated” Take Out, and sweet & salty decadent indulgences were taking center stage last week as the 14 remaining hopefuls faced off in “The Taste” kitchen to put their personal spin on the mentors’ favorite guilty pleasures. In the end, two more competitors were eliminated.  Chef Aaron Sanchez guest judged during this episode.

On tonight’s show the mentors are challenging their teams with creating delicious dishes inspired by classic “street food.” Sandwiches, seafood – and, of course, the classic English delicacy of fish & chips – are on the menu this week as 12 remaining competitors battle it out for the chance to stay in “The Taste” kitchen another week.

Don’t forget to join us for our live recap tonight at 8:00pm when The Taste Season Two episode 4 returns to ABC. While you wait for the recap, let us know what you think of The Taste?

[8:51:26 PM] Curtis: The teams meet with their chefs, the chefs are talking to their team about the upcoming challenge and how it’s going to be on street food. The chefs want their teams to be getting gold stars with these upcoming challenges; Ludo wants to have four people after the team challenge.

The judges step out and say that the theme tonight is street food, after the team challenge someone will be sent out, they’ll be judged by Roy Choi. Now the mentors are going to talk about the challenge with their teams. Anthony takes his team outside to taste something from a food truck, it’s a sandwich. He says that a sandwich is the way to go when it comes to this challenge; he’s really wanting expecting great things from Shellie. Marcus shows his team how to make this falafel chicken and shrimp meatballs.

Nigella is wanting her team to make the perfect fish & chips; Crystal thinks that fish & chips are going to be easy. Ludo is showing his team how to make a sandwich, it’s a classic French sandwich. Thirty second are left the mentors are trying giving last minute advice and motivation to their team. Now the teams are off they’ve got an hour to cook, only the best tasting dish of the team will represent them and will be tasted by Roy Choi. Louise is going to be making a bacon & ham sandwich. Marina is going to be making a roast beef sandwich. Jeff is going to be making a fried chicken sandwich. Cassandra is going to make a maple fried prosciutto sandwich. Anthony shows his team the secret ingredient, he shows them Spam because it’s something Roy Choi loves. Lee is making bacon infused burger, Dana is making a Greek meatball sandwich, brad is making a coriander and tuna sandwich, Shellie is going to be making a Spam musubi. Ludo visits Anthony’s kitchen and find out their using spam, and that Roy loves Spam; he feels like he’s made a mistake not having Spam. Ludo tells his team that they can’t lose this challenge, especially against Spam. Nigella is trying to help out her team, but they seem to be having some problems. Sarah is making a seared tuna taquito; Shehu is going to make a fish eye soup. Jacquelyn has a runny sauce; Nigella wants Crystal to add more spice in her sauce. Nigella is surprised by how messy Jacquelyn’s messy station. Marcus comes over to Anthony and tells him how Ludo is pissed off by his team using Spam. Nigella’s team is not doing too well, Crystal and Jacquelyn don’t seem like they know what they’re doing; they don’t seem like they’re wanting to learn from Nigella.

Ludo is helping Cassandra with cutting bread, though she doesn’t know how to do things, her attitude in learning is something he likes. Shellie is trying to get ready, she’s struggling wrapping the seaweed around her dish and she might not make it in time. Shellie ended up finishing in time; he decides to use Shellie’s mainly for the Spam. Nigella ends up choosing Crystal’s dish. Marcus decides to go with Shehu’s dish. Nigella is having a hard time with her team; they’re very unorganized and can’t work together. Ludo decides to go with Jeff’s dish, since no one would tell him which he should decide. Roy Choi will now blind taste the dishes, whoever has the worse dish will be sent home. Roy tastes Shellie’s dish first, he looks like he really enjoys it. Roy tastes Shehu’s fish eye soup, he really likes it. Now he’s up to taste Crystal’s fish and chips, he doesn’t understand the components that well. Roy tastes Jeff’s dish, he likes it, but the bread isn’t right. Choi likes the most is Shellie’s Spam, Ludo doesn’t look too pleased about this. Roy’s second best was Shehu’s dish. Now Jeff and Crystal’s dish are the least. The worst dish for Roy is Nigella’s kitchen, Nigella isn’t surprised because of how her chefs acted in the kitchen, and they don’t have the attitude to win. Nigella says to them that they each have an attitude problem, that when she talks none of them listen to her. Nigella wants to know why Crystal should stay, then she asks why Jacquelyn should stay in the competition; both should go home, but Nigella decides to send Crystal home. It’s sad seeing people like Crystal and Jacquelyn on a show like this, having an opportunity to learn from a great chef, but not listening or trying to learn is disrespectful.

Anthony’s team will get a special lesson from Roy; Anthony says to Nigella her speech is riveting he can tell she’s mad. Nigella wants Jacquelyn to aim high, but she doesn’t seem to notice how low she currently is. Ludo is pissed off that Anthony one if first team challenge with Spam. Roy is going to show them how to make a quesadilla; he puts his entire soul into this dish. The other contestants want Jacquelyn to leave the competition, because she isn’t trying hard enough. Nigella speak to Jacquelyn and says to her that she’s not taking herself seriously, Nigella tells Jacquelyn to be more organized and focused in the next challenge. Nigella tells her good luck.

Shellie is making fried chicken tacos. Lee is going to be making a halal style lamb over rice; Brad is making a surf & turf flatbread. Louise is making a peanut and potato chip crusted caramel apple. Marina is making a caramelized cinnamon banana; Jeff is going to be cooking curried lamb meatballs. Cassandra is making a falafel pita sandwich; she’s worried not having a guest judge helping out in the kitchen. Sarah’s fryer keeps turning off; she’s getting a little worried. Lee says that Jacquelyn is a bad cook and doesn’t deserve to be in this competition. Shellie is thinking the exact same thing. Brad appreciates the help from the guest judge. Cassandra is having problems working without a guest judge, because her questions can only be answered by her fellow team mates. There’s only fifteen minutes left, they’re now rushing to get their food plated and ready to go.

Cassandra calls over a medic, because she’s cut herself for the second time in the competition.

She’s cut herself mainly due to the high pressure she’s feeling in the competition; Jeff says that he’ll help out Cassandra a bit whenever he has the free time.

All the contestants enter the break room; Shehu is worried about being eliminated from the competition tonight. Jeff really wants Jacquelyn to leave. Louise finds that Jacquelyn is completely delusional in her cooking skills. The contestants believe that Jacquelyn needs to go home; she doesn’t even know how to explain how she cooked her dish properly.

Jeff doesn’t believe that the bottom two belong there. Anthony asks what Cassandra cooked, he tells her that it was mushy and wasn’t anything great.  Ludo says that her choice was great but the execution wasn’t right. Shehu explains how he made his dish and the decisions he made, Marcus tells him that he liked how he tried to bring something new, but the execution wasn’t there. Anthony says that Shehu has a ton of skill and credentials. Shehu and Cassandra told the judges why they should stay in the competition. The contestants go to the break room; Marina and Sarah get their gold stars on them. Shehu isn’t feeling too good about this situation, Cassandra doesn’t want to go home because she feels she has so much to learn. Anthony is stunned that Shehu is in the bottom, he doesn’t understand how this happened. Shehu is confident that he’s going to be going home. The judges are fighting over who they want to go home, Nigella and Ludo want Cassandra to stay while Marcus and Anthony want Shehu to stay.  Marcus and Ludo are fighting to keep the people in their team. Ludo is getting extremely pissed off with Marcus.

[9:58:19 PM] Curtis: Cassandra says that they both don’t deserve to go home; she talks about how hard they work in the kitchen. Jeff is confused how Jacquelyn’s dish wasn’t picked as the worst. The contestants come out to hear who’s going home; Cassandra and Shehu will be going home tonight. The judges tell them how difficult it was to come up with this decision, Anthony tells them how Shehu is a talented chef, but his dish today was horrible. Anthony then tells Cassandra that she’s capable of great things. In the end it looks like Cassandra is going home tonight, Ludo tells her that he believes in her and is so proud of her. Cassandra says she’s grateful for being a part of this competition. Cassandra is upset, and the judges are also very upset with the outcome it was heartbreaking. Shehu wanted Cassandra to go home, but he never wanted her to leave the way she did. Cassandra enjoyed her time in the competition; she really liked learning from Ludo.