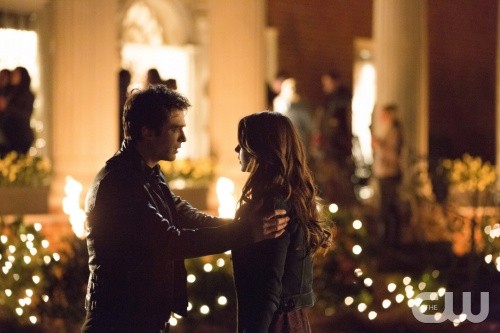 Tonight’s episode of The Vampire Diaries was all sorts of intense, what a winter premiere it was.  We cannot wait till next week and we managed to get some juicy spoilers and a sneak peek video of “The Devil Inside” for your enjoyment below while you wait for it to air January 23rd, 2014!

On tonight’s show which was the 100th episode Katherine was in the hospital and she was dying, but she was still alive.  No one knew whether she will even last one more day.  Jeremy, Damon, Caroline, Elena and Stefan were drinking and reminiscing about the worst things that Katherine ever did to them.  Most of them recount how she almost killed them, but Caroline had them beat because Katherine actually killed her.  Meanwhile, Katherine remembered the traumatic night in 1490 when she gave birth to the daughter who was immediately taken from her.  Did you watch tonight’s episode?  We did and a lot more happened, check out our nifty we recap, here!

Spoiler alert: If you’re one of those people who doesn’t like spoilers, stop reading now! We have some juicy spoilers for you about the season 5 episode 12 of CW’s “The Vampires Diary.”

Official CW synopsis: “When Enzo (guest star Michael Malarkey) brings Damon a gruesome present and insists that they bond by committing an act of revenge, Damon is going to make an effort to do the honorable thing. After finding himself in awkward and confusing conversations with Nadia (guest star Olga Fonda), Matt will impulsively decide to throw a party, where Caroline makes a stunning confession to Elena, then has to face the consequence of her actions with Stefan and Tyler. Aaron (guest star Shaun Sipos) will do his best to make amends for his family’s past misdeeds and will start a new life for himself. Finally, Elena is going to suddenly find herself in a life-threatening situation with only minutes to figure out how to save herself.”  Kellie Cyrus directed the episode, and it was written by Brett Matthews & Sonny Postiglione.

On the next episode Caroline will make a shocking revelation and it is going to have something to do with both Stefan and Tyler.  What do you think that revelation is going to be?

The Vampire Diaries Season 5, Episode 12“The Devil Inside” airs on the CW on January 30th, 2014. Check out the preview video & some photos from episode 12 and let us know in the comments below what you think!