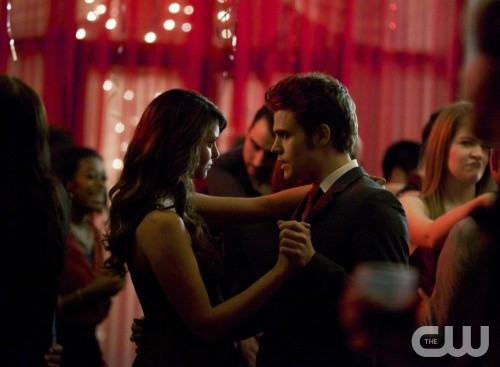 Tonight’s episode of The Vampire Diaries was all sorts of intense, we loved it.  We cannot wait till next week and we managed to get some juicy spoilers and a sneak peek video of “Total Eclipse of the Heart” for your enjoyment below while you wait for it to air February 6th, 2014!

On tonight’s show when Enzo brought Damon a gruesome present and insisted that they bond by committing an act of revenge, Damon was going to make an effort to do the honorable thing. After finding himself in awkward and confusing conversations with Nadia, Matt  impulsively decided to throw a party, where Caroline made a stunning confession to Elena, then had to face the consequence of her actions with Stefan and Tyler. Aaron would do his best to make amends for his family’s past misdeeds and wanted to start a new life for himself. Finally, Elena  suddenly found herself in a life-threatening situation with only minutes to figure out how to save herself.  Kellie Cyrus directed the episode, and it was written by Brett Matthews & Sonny Postiglione.  Did you watch tonight’s episode?  We did and a lot more happened, check out our nifty we recap, here!

Spoiler alert: If you’re one of those people who doesn’t like spoilers, stop reading now! We have some juicy spoilers for you about the season 5 episode 13 of CW’s “The Vampires Diary.”

Official CW synopsis: “Hoping to help everyone move past recent traumatic events, Caroline will convince Elena and Bonnie to attend Whitmore College’s “Bitter Ball” for broken-hearted students. Bonnie will be intrigued with a fellow student named Liv (guest star Penelope Mitchell), who appears to be dabbling in witchcraft. Tyler will start to worry about Matt’s relationship with Nadia (guest star Olga Fonda).  After making a disturbing discovery, Stefan will have a frustrating conversation with Damon and Enzo (guest star Michael Malarkey). Dr. Wes (guest star Rick Cosnett) is going to struggle to continue his research project with help from a new benefactor ,named Sloan (guest star Caitlin McHugh). Still bent on revenge, Damon and Enzo will resort to violence to convince Bonnie and Jeremy to help them, but their plan will take an unexpected and horrifying turn.”

On the next episode Bonnie finally gets herself another witch friend.  It looks like an interesting episode because we all know with Elena dancing with Stefan Damon would go mad.  So is Elena possessed by Katherine?

The Vampire Diaries Season 5, Episode 13“Total Eclipse of the Heart” airs on the CW on February 6th, 2014. Check out the preview video & some photos from episode 13 and let us know in the comments below what you think!