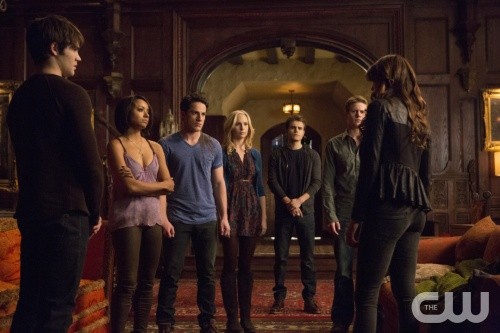 Tonight’s episode of The Vampire Diaries was all sorts of intense, and next week the race to save Elena is on!  We cannot wait till next week and we managed to get some juicy spoilers and a sneak peek video of “Gone Girl” for your enjoyment below while you wait for it to air March 6th, 2014!

On tonight’s show Damon’s behavior escalated from destructive to deadly, Stefan began to regret their last conversation and decided to track Damon down and intervene. For reasons of her own, Elena volunteered to come along. Dr. Wes enlisted the Travelers to set a trap that would once again test Damon’s friendship with Enzo. After a heart-to-heart talk with Nadia, Matt enlisted Caroline and Tyler’s  help to protect Elena, leading to a violent confrontation. Later, when Stefan tried to comfort a dejected Caroline, their conversation led to a horrifying realization.  Did you watch tonight’s episode?  We did and a lot more happened, check out our nifty we recap, here!

Spoiler alert: If you’re one of those people who doesn’t like spoilers, stop reading now! We have some juicy spoilers for you about the season 5 episode 15 of CW’s “The Vampires Diary.”

Official CW synopsis: “While Nadia (guest star Olga Fonda) remembers her centuries-long search for her mother, Stefan (Paul Wesley), Caroline (Candice Accola) and Matt (Zach Roerig) come up with a desperate new plan to save Elena’s (Nina Dobrev) life. For the second time, Bonnie (Kat Graham) and Jeremy (Steven R. McQueen) must turn to Liv (guest star Penelope Mitchell) for help. Damon baits Tyler (Michael Trevino) into a nasty confrontation, then takes off to seek revenge on Dr. Wes (guest star Rick Cosnett). Caroline and Tyler come to a new understanding. Finally, Bonnie learns of a terrifying secret that will threaten the lives of all her friends.”

On the next episode the race is on to save Elena.  Caroline, Matt and Stefan are going to be trying their best to rid Elena’s body of Katerine.  Bonnie is going to find out a terrifying secret that is going to put everyone in danger.

The Vampire Diaries Season 5, Episode 15“Gone Girl” airs on the CW on March 6th, 2014. Check out the preview video & some photos from episode 15 and let us know in the comments below what you think!