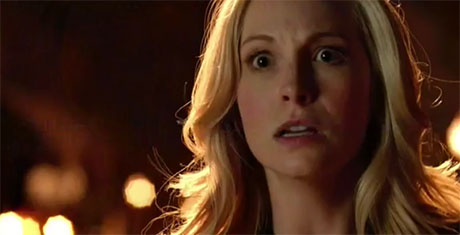 The Vampire Diaries season 5 has turned out to be a thrill ride, as always. On the most recent episode, Damon took Stefan and Elena to a cabin to keep them safe, and then he devised a parlor game to get them to reveal a secret they’ve been hiding for a long time now. Meanwhile, Bonnie kept Jeremy in the dark regarding the uncertain future of the Other Side. If you missed TVD season 5 episode 20 “What Lies Beneath,” then be sure to CLICK HERE to get your full recap!

Spoiler alert: So what can we expect on next week’s episode? Let’s find out! If you’re one of those people who doesn’t like spoilers, then stop reading now! Because we have some juicy spoilers for you about episode 21 of CW’s The Vampires Diaries.

Official CW Synopsis: When Stefan (Paul Wesley) and Elena (Nina Dobrev) escape from Markos’ (guest star Raffi Barsoumian) control, only to find themselves Stranded in a remote location, Stefan gets philosophical with Elena about her relationship with Damon (Ian Somerhalder). After their attempt to protect the dopplegangers goes badly, Liv (guest star Penelope Mitchell) and Luke (guest star Chris Brochu) come up with a dangerous new strategy.

Damon recruits Matt (Zach Roerig) and Jeremy (Steven R. McQueen) to help him set a trap for Markos, who turns out to have a devastating surprise of his own. Bonnie (Kat Graham) finally admits to Caroline (Candice Accola) that she’s been keeping the truth about the Other Side from everyone. Finally, while Bonnie searches desperately for a way to stop Markos, Caroline is witness to an unthinkable act of violence by one of the Travelers.

Make sure to check out the video of next week’s episode below. We can’t wait for it! The Vampire Diaries Season 5 Episode 21 “Promised Land” airs on the CW on May 8th, 2014. Let us know in the comments section below how you think this season’s going to end! Do you think we’ll be losing any major characters — like perhaps the two witchy blond wonder duo, who clearly have it out for Elena and Stefan?