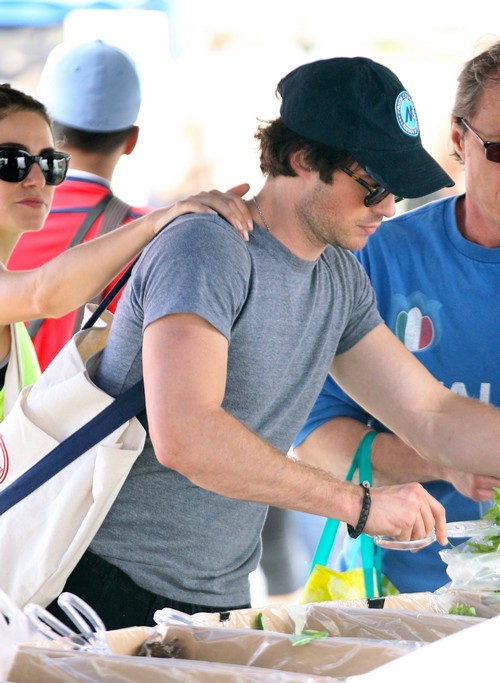 Nina Dobrev and Ian Somerhalder are set to reinvent the definition of ‘awkward’ now that are back to filming The Vampire Diaries‘ sixth season. The duo have been engaged in a weird push-and-pull relationship with all of their rebounds, and I don’t see how it won’t affect their on-screen and off-screen relationships on the show. Ian is going full on PDA with his new girlfriend, Nikki Reed, while Nina is getting her revenge by flirting and getting grabby with every other single dude she comes across. Here is a Vampire Diaries season 6 spoilers message for you: Ian Somerhalder is finished with the show, at least in terms of his future. There is no way that if Ian cared about staying on TVD that he would be flaunting his romance with Nikki Reed.

So really, how are all these relationship dynamics going to affect their time on the show? Despite initial rumors claiming that Ian’s time on the show was limited, it looks like he will be back in some capacity for the sixth season. This was confirmed during the show’s Comic-Con panel this past weekend, where Ian and Nina exemplified the awkwardness of their on-again/off-again exes relationship. Let’s not forget that Nina already slammed Ian hard on Instagram calling him a blood-sucking ‘mosquito’ after pics of Ian with Nina’s former friend Nikki surfaced a couple of week’s ago. I wonder if people saw that certainly the diss was meant for Ian – let’s remember that Ian plays the role of a blood-sucking vampire on The Vampire Diaries.

So in that regard, how awkward are Nina’s and Ian’s love scenes going to be? Are the writers even going to keep that aspect of the show the same, knowing about the complicated off-screen relationship at the center of their show? Now that Ian’s with Nikki, how is he going to film those scenes with his ex-girlfriend – especially if his ex-girlfriend is pissed at him for blatantly flaunting his relationship with his new girlfriend?

Plus, I wouldn’t put it past Nina to bring a new fling to set every other week to make Ian jealous, much the same way she’s been behaving at Comic-Con and recent events.

There’s also a chance that the writers actually change Ian’s storyline based on all these developments. They can’t exactly reduce Nina’s part, since she’s [ostensibly] the lead of the show. But since they already killed off Ian’s character, then they can always reduce his stint on the sixth season. They know that fans aren’t going to want Nina and Ian faking their romance anymore, especially not when he’s being so blatant about his relationship with Nikki. Those fans aren’t very good at suspending their disbelief, and they won’t want to buy into a fake relationship. As such, don’t expect too much Elena and Damon romance next season. But on the other hand, that’s GREAT news for Paul Wesley‘s fans.