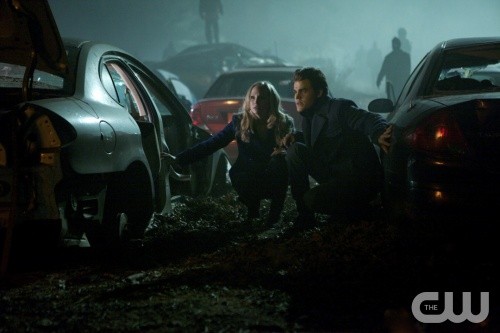 Tonight’s episode of The Vampire Diaries was all sorts of intense,  and we cannot wait till the next episode. Good news,  we managed to get some juicy spoilers and a sneak peek video of “Rescue Me” for your enjoyment below while you wait for it to air March 27th, 2014!

On tonight’s episode when Stefan tried to explain recent events to a very sick Elena, her first instinct was to call Damon. At the same time, Damon was trying to figure out how to make a disturbing confession to Elena. While going through Dr. Wes’ files, Caroline discovered a frightening secret, and was surprised when Enzo appeared, claiming to have the solution everyone was searching for. At Enzo’s insistence, Caroline asked Stefan to meet her at a mysterious location where they were joined by a group of Travelers, including Sloan, who revealed new information on the importance of doppelgangers. During spring break on a mostly deserted Whitmore campus, Elena ran into Luke, a student who seemed to know her, though she had no memory of meeting him. Recently dumped by his boyfriend, Luke proposed that he and Elena spent the break getting drunk together, but she sent him off on an urgent mission to find Bonnie and the “newbie” witch, Liv. Damon finally told Elena the truth about his recent activities, and they came to a new agreement about their relationship.  More happened!  Did you watch tonight’s episode?  We did and a lot more happened, check out our nifty we recap, here!

Spoiler alert: If you’re one of those people who doesn’t like spoilers, stop reading now! We have some juicy spoilers for you about the season 5 episode 17 of CW’s “The Vampires Diary.”

Official CW synopsis:  ” Markos will arrive in Mystic Falls. In order to keep Stefan (Paul Wesley) from being harmed by Sloan (guest star Caitlin McHugh) and the Travelers, Caroline (Candice Accola) and Enzo (guest star Michael Malarkey) will agree to make a trip to Atlanta to find a newly discovered doppleganger.  Caroline will get surprised when Enzo opens up to her about his past. Damon (Ian Somerhalder) and Elena (Nina Dobrev) will spend an awkward afternoon at Jeremy’s (Steven R. McQueen) parent-teacher conference, where they hear bad news about his behavior at school. Afterwards, Damon will reluctantly tell Elena upsetting news about Jeremy’s personal life.”

On next week’s episode Bonnie (Kat Graham) will have an unsettling encounter with Luke (guest star Chris Brochu), and learns more about his family history. Liv (guest star Penelope Mitchell) is going to fill Jeremy in on the rumors about the Travelers’ next move and demonstrates her considerable power. Jeremy will make an unexpected deal with Liv. Then will make a decision that is devastating to Elena.

Stefan and Caroline will share a special moment of friendship. Finally, a terrifying turn of events at the Travelers’ camp is going to lead to the appearance of their mysterious leader, Markos (guest star Raffi Barsoumian). Leslie Libman directed the episode, and it was written by Brett Matthews & Neil Reynolds.

The Vampire Diaries Season 5, Episode 17 “Rescue Me” airs on the CW on March 27th, 2014. Check out the preview video & some photos from episode 17 and let us know in the comments below what you think!