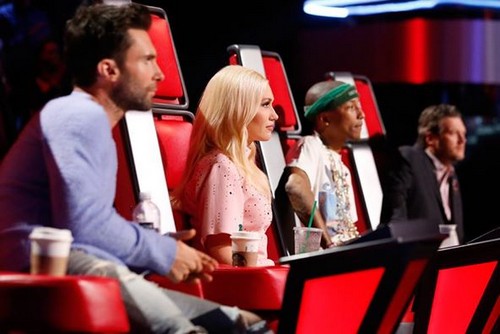 On the last episode the Live Playoffs continued and more artists performed, with two artists from each team advancing from the viewers’ vote, and each coach rounding their team up with their own choice. Did you watch the last episode? If you missed it, we have a full and detailed recap right here for you.

On tonight’s episode as per the NBC synopsis, “RESULTS ARE IN – the top 20 artists await America’s vote. The top two performers from each team will move through to the live shows and the coaches, Adam Levine, Blake Shelton, Gwen Stefani and Pharrell Williams will save one remaining artist from their team.”

Tonight’s season 7 episode 17 is going to be exciting. We’ll be blogging it right here for you. In the meantime hit up the comments section and tell us your thoughts on season 7 of The Voice and the two new judges, Pharrell Williams and Gwen Stefani.

Tonight we’re kicking off with team Blake performing on stage, Blake gives them a big standing ovation at the end. Carson asks Blake what his plan is for his team moving on, Blake says that you plan in the knock outs but right now it’s hard to make a plan for them; all he can do is try his best to make them the best they can be. Pharrell says that last night he didn’t expect everyone to rise to the occasion, he was so impressed with all the great acts.

Blake is very impressed with his team and how all his artists are really giving it their all, he loves how the artists all want this so badly. The first artist on team Blake to be saved is Reagan James and Craig Wade Boyd will be moving on as well. Blake can only choose one of his last three remaining artists to move on, he knows it must be hard for them but it is very hard for him too; he decides that Jessie Pitts will be moving on to the next round.

Next up Damien comes in and gives Blake his favorite pocket knife he had taken from him at the airport one time, Blake pulls Damien in and kisses him on the head; he is so happy to get his knife. Now it’s team Pharrell performing on stage.

Next up we get a recap of team Pharrell last night showing us what it is they’ll be judge upon, the first artist saved by America is Luke Wade and the second artist is Danica Shirley. Pharrell decides he’s going to choose Sugar Joans, she is one of his personal favorites since the beginning.

Team Gwen takes the stage performing “Riptide” together and right after we get a recap of their performances last night; Gwen was so impressed with how great all of her artists did. The first artist saved by America is Taylor John Williams and the second artist is Anita Antoinette. Gwen decides that the third artist joining her next week is going to be Ryan Sills.

Next up is team Adam performing on stage together, we now see a recap of all the performances and Adam doesn’t believe any of his artists were weak last night; he has no idea who could be going home tonight. The first artist moving on and saved by America is Damien; the second artist saved is Matt McAndrew. Adam decides that the third artist to join him in the next round is Chris Jamison.