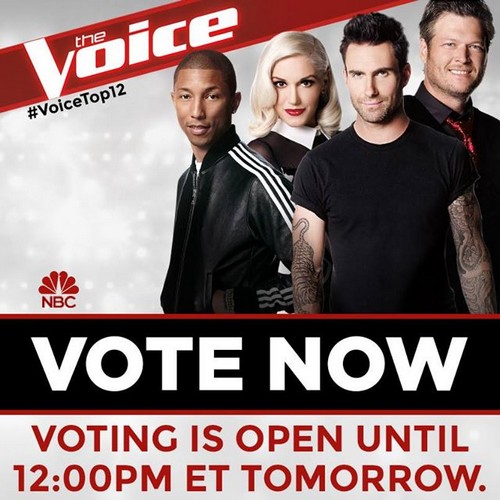 Tonight on NBC the Emmy award winning music competition The Voice continues with an all new Tuesday November 18, season 7 episode 19 called, “Live Eliminations.” On tonight’s episode, two vocalists are eliminated in a results edition and the Top 10 are revealed.

On the last episode the top 12 artists performed live in front of coaches Adam Levine, Blake Shelton, Gwen Stefani and Pharrell Williams for America’s vote. Carson Daly (“Last Call with Carson Daly”) hosts. Did you watch the last episode? If you missed it, we have a full and detailed recap right here for you.

On tonight’s episode, America will vote to eliminate two artists and the remaining 10 will move on to the next phase of the competition. The competition is really heating up as we get closer to the finale and last night the remaining contestants brought their A game.  Carson Daly (“Last Call with Carson Daly”) hosts.

Tonight’s season 7 episode 19 is going to be exciting. We’ll be blogging it right here for you. In the meantime hit up the comments section and tell us your thoughts on season 7 of The Voice and the two new judges, Pharrell Williams and Gwen Stefani.

Kicking off tonight’s eliminations is Gwen and her team performing on stage singing “The Tide is High” by Blondie. We now take a look at all of last night performances reminding all of us why we voted for who we did.

The first artist saved by America’s votes is Matt McAndrew and the second artist that has been saved is Anita Antoinette.

Adam says that he is very confident and believes his team will all make it through, he was so impressed last night. Gwen says that it’s so draining this whole process, it was such a build up to watch them and tonight she is super nervous. Pharrell says he can’t wait next week and knows his team is going to pull through. Blake says from week to week you’ll see ups and downs; but hopes America can see how hard these artists work.

Next up is team Blake performing on stage, now we see the seventh artist saved for next weeks live show is Taylor John William, the eight artist moving on is Chris Jamison and all of Adam’s team is safe. The last artist saved by America is Luke Wade.

First up performing for the chance to stay is Jessie Pitts with Gravity, Blake says people watching should know how great an artist she is; she’s the most sweetest person he’s ever worked with. She deserves the votes because Jessie is important to the competition with her unique voice.

Next up is Sugar Joans singing “I Wanna Dance With Somebody”, Pharrell says that was amazing and thinks America has to save her because of how beautiful her voice is; she has the passion to succeed and she needs to be here.

Next up is Ryan Sill singing “More Than Words”, Gwen says it’s so intense and she adores him; she knows he deserves to be here and he never stops improving. She will be so sad if he doesn’t get saved.

The artist America instantly saved at the end of the show is Ryan Sill.