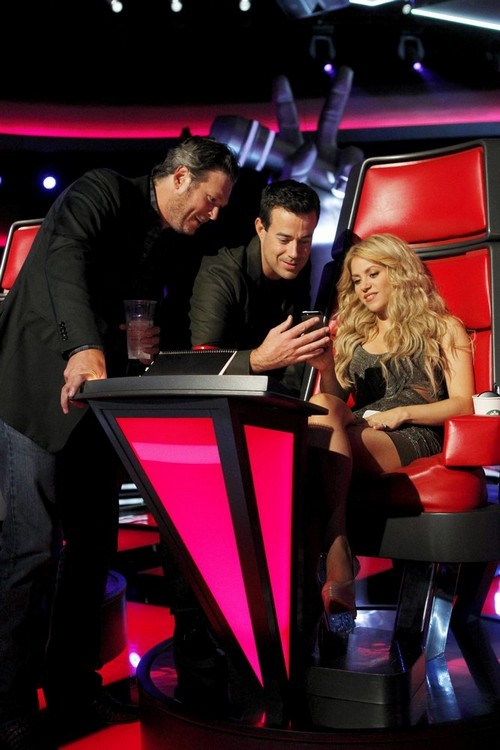 Tonight on NBC their Emmy Award winning music competition, THE VOICE returns with another new episode as the “Blind Auditions Continue Night 4” and the judges,  Shakira and Usher, Adam Levine and Blake Shelton continue to look for artists to fill their teams.  There is only one more week of Blind Auditions to find the perfect team.  Did you watch last night’s blind auditions Night 3?  We did and we recapped it right here, for you.

On last night’s episode 11 talented artists made the grade, all with personal stories to match their powerful voices. The coaches scratch and claw to land the best of the best, and it wan’t always so friendly on coaches’ row.

Tonight’s “Season 6 Blind Auditions Night 4 continue” is going to be an exciting one, which you won’t want to miss. So be sure to tune in for our live coverage of NBC’s The Voice – tonight at 8PM EST! While you wait for our recap, hit the comments and let us know how excited you are about the return of The Voice.

RECAP: First up today is Megan Ruger and she is a fan of 80’s rock; she is a rocker at heart and has found that she has been having trouble struggling with music. She believes The Voice will help her find her path; she found out at young age that her dad adopted her and loves him. He supports her so much in her music; Megan is glad they are there with her. Megan is singing “Just Like A Pill” for her blind audition.

Blake and Usher turn right at the end. Blake loved how Megan was going to a whole bunch of new levels and couldn’t believe he never turned around earlier; Adam says she was amazing and says to let the ding dongs fight it out. Usher says Megan had amazing energy and sang well; hoping to help her further her talent. Megan decides she wants to have Blake be her coach.

Next up is Morgan Wallen who is currently a landscaper; he has been singing since 3 years old. He was offered a record contract while younger but his parents shot it down wanting him to live normal; he was really passionate about baseball and it took so long for his injury to recover and the school he wanted to attend turned him down for a baseball scholarship. Morgan is singing “Collide”.

Shakira hits her button right away. Usher turns around as well. Adam says he is so happy he got chosen; Shakira says she turned because his voice is unique and the rasp is so amazing. Usher says that he turned because he has something very unique and that there is no one else has a voice like his on The Voice right now; he finds it cool. Usher felt like there were moments that weren’t exicuted properly and would like to coach him to victory. Morgan decides he wants Usher to be his coach.

Next up is James Cavern and his parents came from Vietnam and was 14 years old when he came to the USA; his parents never really supported his pursue for music and wants him to be a doctor of some sort. James right now lives in a really small place with no bed; he doens’t live in luxury but lives happily. James is singing “Let’s Get It On”.

Nobody turns for James, Adam says it was a great song and one of his favorites; he felt that it was a tough call to pick such a song. Usher says he shouldn’t be afraid to choose such a song but felt that it was the right thing for him; he wanted him to use his rasp a little more when auditioning.

Next up is Emily B.; music took off for her in college by going to California. She sung at her local church and joined something where she sung background for movies and artists, though she at one point had a weird growth on her eye; she had two brain surgeries. She was so scared and was worried if she’d ever make it through it; now she is ready to come out and pursue music wanting to now be the super star.

Shakira, Blake and Usher turn for her. Adam says she did an amazing job and that her last note was perfect; Usher loved how she really worked that song. Blake loves her high notes and really wants to work with her; Shakira mentions she was the first to turn and believes that they can be the best together. Emily decides to go with Shakira.

Next up is Stevie Jo and his parents were both in heavy metal bands when they were young but gave it up for the family; Stevie used to be in a metal band but he has now gone more for a soul and R&B approach. He is singing “Here Goes My Baby” by Usher and is nervous singing it in front of him; he really wants to launch his career and make his family proud.

Usher turns around. Adam says he was sure Stevie wasn’t white; he believes it’s a beautiful and pleasant surprise. Usher said he thought he was black too, but didn’t react at all when seeing he was white because he knew Blake would too. Shakira says his falceto’s are perfect, Usher loved how he just moved throughout the song and believes they can win it together.

Tonight’s last artist is Audra McLaughlins and she grew up with a learning disability and had to be in special classes because she really couldn’t keep up with the other students; her parents are supporting her a lot with her dreams. Audra believes this is the biggest moment of her life and is excited; she is singing “Angel From Montgomery”.

Adam turns right away. Blake then turns around. Shakira and Usher turn around right at the end. Usher says she has an amazing voice; Shakira loves the sound and believes she is the missing link. Blake mentions how his wife used to perform that song a lot and held it to his wife’s standards and felt at the end he just felt team Blake from her. Audra picks Blake to be her coach and Adam is so upset.