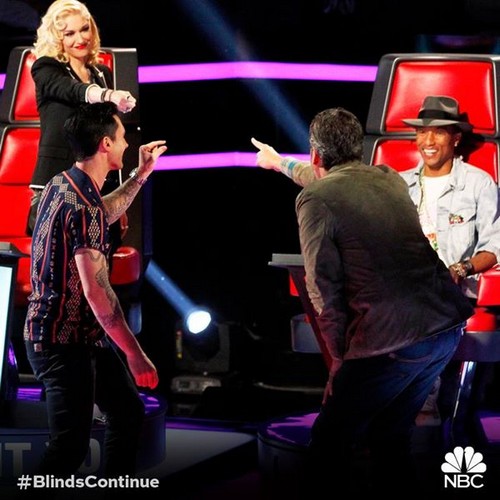 On the last episode it was the third episode and the blind auditions continued , things began to get heated for the judges as the two veteran judges, Adam Levine and Blake Shelton faced off against each other and two rookie judges Pharrell Williams and Gwen Stefani. Did you watch the episode? If you missed it we have a full and detailed recap, right here for you.

On tonight’s episode the fourth part of the blind auditions will be taking place, we’ll be seeing the judges work on creating their teams for who they think has potential of becoming “The Voice.”

Tonight’s season 7 episode 4 is going to be exciting. We’ll be blogging it right here for you. In the meantime hit up the comments section and tell us your thoughts on season 7 of The Voice and the two new judges, Pharrell Williams and Gwen Stefani.

The first artist today is 15 years old Katriz Trinidad, she lives with 8 family members and it can get very hectic but she loves them to death; her mother is very supportive of her and loves her a lot. Katriz entered her first competition when she was young, she not only wants to win the Voice but wants to start her career in music.

Pharrel, Gwen and Blake; Pharrel says he’s been dreaming for an artist like her for his whole career and he really wants her on his team so badly. Blake feels like he’s not even there, though says he wants to work with her and make her the star she is meant to be. Gwen says she loves her voice and can’t believe how talented she is at her age; she thinks she is also so cute. She started off so soft and hit such a beautiful note that really surprised her; she would make her performance a little more relaxed. Katriz decides she’s going to join team Pharrel.

Next up is Ethan Butler and he grew up on gospel music, only this year and a half has he tried to pursue music outside of curch; his mother is very supportive of the idea and knows her son is very talented. He works in a church himself, though he’d love to do music for a living; he’s dedicating his audition to his sister.

Blake and Adam turned around for Ethan, Adam says that he loved it and tried not to be happy about it so the others didn’t turn around; he wants him on his team. Blake says he would love to work with him since he has a very good voice and feels he could help him a lot; he wants to figure out what kind of artist he is. Ethan decides he’s going to go with team Adam.

Next up is Tanner Linford who auditioned last season and was insanely nervous, he knew he wasn’t ready and wasn’t surprised they didn’t turn around; he was told by many friends and family to go back to try again. He has been singing a lot more and has gotten a deeper voice now, he’s hoping it helps.

Right at the end Blake hits his button for Tanner, he is so shocked by it and can’t believe it has happened. Blake recognized him right away, Gwen says that his voice doesn’t match his body at all. Adam says it was awesome and he has imrpoved a lot and once again Adam loves it. Pharrel says he did a great job and could feel him put his heart out in it. Blake heard some nerves and loved how shocked he was on the last note, he can’t wait to work with him.

Next up is Roem Baur and he stays with the kids at home in the day, but plays gigs at night; he tried to pursue opera and won a couple of awards. Opera was taking him into the directions of being an opera singer or a teacher, though he really wanted to do Rock and Roll; he believes that The Voice will help him out to achieve what he wants.

Sadly nobody turns for Roem, though Adam says that he felt Roem was trying too hard to copy the original and should try harder to make it his own; even the voice was too similar.

Next up is Jean Kelly she loves music a lot and would love it to be her career, she remembers being in an accident when she was young where she lost her mother. So tonight she is singing for her, she misses her mom a lot and music really did save her.

Blake and Gwen turn around for Jean, Blake was on the fence with her until the last note because it was perfect; she was so powerful and wants her on his team. Gwen says she would love to have her and knows she can help her with being a woman as well and having a long career. Jean decides she wants to join team Gwen.

Next up is Chris Jamison and right now he’s in college and on campus he’s the mail man; he always loves to be doing something all the time. He also joined the rock ensemble and it has helped him a lot. He’s a triplet and it’s been really fun.

All the coaches turn around for him, Gwen says he’s really cute; Adam said he loved his vocals and felt the emotion inside of it. He would love to have him on his team, he really feels he can help him become the best. Gwen says she didn’t turn for a long time because she wanted someone special and she heard all she wanted. Pharrel says that he got lost in the moment and went with it, he loved that a lot. Blake says he might not be the obvious choice, though knows he surely is. Chris decides he’s going to join team Adam.

Next up is Craig Wayne Boyd and he never had a song that made the radio so he just did a bunch of shows around Nashville; he has been a musician for over 11 years and has been having a very hard time. He loves his son and is a single father, he loves music though and hopes he can finally make it.

Blake and Pharrel turned around, Adam loves his jacket a lot; Pharrel says he didn’t know the song but loved some of his notes in the song. Blake says that he wants him on his team, he’s a great country singer and knows he can help him. Craig chooses Blake as his coach.

Next up is Tini Grey, he grew up climbing coconut trees and even made fire to cook; his father was the singer on the island. He moved to California and was working as an architect; he would then go to play gigs at times and he was shocked with how much he actually loved performing.

No one turns for Tini, Gwen said his voice is very annoying and can’t explain why she didn’t turn around; she felt it got wiggly in the high parts. Blake says his falceto was okay, but not quite enough for him. Adam agrees, he has to improve on those; though he does have a great voice.

Next up is Toia Jones and she grew up singing in church; she never missed a sundar. Her dad owned a lounge and his music really inspired her a lot to become a singer. He died when she was 16 and it was hard, she misses him so much and wants to make her dreams a reality.

Adam and Pharrel; Adam says he loved her high note and has no one like her on his team. He knows he can help her so much, knowing she will become so much better. Pharrel says he will do all he can to accomplish all she wants in this competition and knows she has the potential. Toia goes with Pharrel her coach.

Next up is Amanda Lee Peers, she was in church and in a religious family; she was gay and it was very hard to come out. People at church didn’t seem comfortable with it at all so she left, she found music and loves it a lot; it helped her a lot with being more comfortable with herself.

Gwen was the only one to turn around for her, Gwen says she is so happy to have her on her team. Gwen loved her voice and her stage presence was very good, Pharrel got caught up in the voice and forgot to hit her button.

Last up is Jonathon Wyndham and he loves Star Wars and Lord of the Rings, he had a speach impediment still fifth grade; though when singing he never had it so it helped him so much. He loves Crackerbarrel and has been to well over 100, he would visit the rest with the money if he wins the show.

Gwen loved hos sincere he sounded when singing, though he was very controlled and had perfect emotional delivery. Adam says he loved how dramatic the song was, though with how great he was singing and it was a perfect tone for it all. Pharrel looks for an interesting tone and conviction in the voice, he really felt Jonathon made it his song. Blake says that they just seem perfect for each other and that they’ll make an amazing team. Jonathon says he’s going to go with Adam.