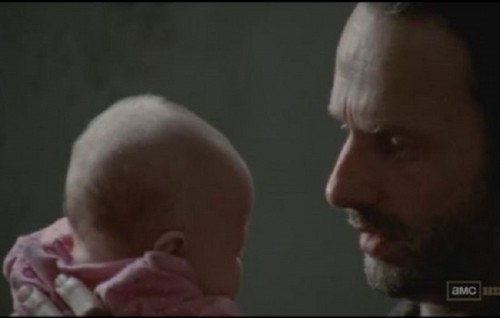 When the mid-season finale for the fourth season of the Walking Dead aired last fall, one of the most shocking deaths was the [apparent] demise of Baby Judith. Her carrier was discovered by Carl and Rick, bloody and empty – leading them to the conclusion that Judith was dead. However, a lot of viewers refused to believe that, claiming that Judith was still alive and that Tyreese had her. For those of you who can’t remember, Tyreese and the little sociopath children went back to the prison to get something before running away, and we haven’t seen them since.

And now, after months and months of waiting, plus an already fantastic mid-season premiere, we’re going to find out what happens to Baby Judith. Spoilers ahead, obviously. Despite the producers, writers, and actors of the show refusing to comment on Baby Judith’s fate, a new [and leaked] international promo for the show’s 10th episode Inmates might have spoiled the surprise.

The promos show a split second [captured via a screencap] of Tyreese holding what is clearly baby Judith wrapped up in a blanket, revealing that she is still alive. Granted, Rick and Carl don’t know that, but hopefully they’ll get a chance to reunite with her before anybody else on the show becomes walker chowder.

This ‘surprise’ of Judith’s survival isn’t actually a surprise. Keep in mind, this is still a television show, and regardless of how things played out in the comics, killing a baby is considered a big no-no on TV. Especially when the baby’s a main character who’s loved and cared for by everyone involved.

Are you guys surprised by Judith’s fate? Let us know your thoughts in the comments.