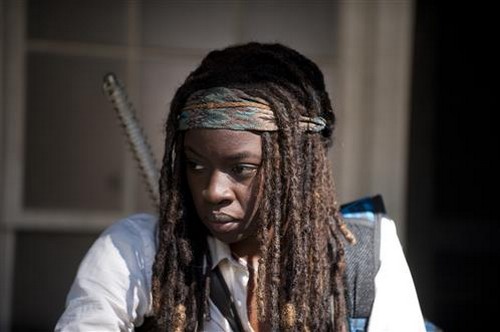 Tonight on AMC THE WALKING DEAD returns with all its gory goodness and a new episode. Tonight’s episode is called, “Claimed” and on tonight’s show group members deal with their past..  If you happened to miss the last episode before the break, don’t worry. We’ve got you covered. Click here for a full recap of the last episode to find out what you missed!

On last week’s episode the scattered groups begin to unite and we got to catch up with Daryl, Beth, Tyreese, Sasha, Maggie and Glenn.  The group encountered obstacles in their quest for stability and safety.  In the final scenes we saw new characters, Michael Cudlitz who plays Abraham, a former Army sergeant, Rosita and Eugene.

On tonight’s episode we get to learn more about Sargent Abraham Ford and his companions Rosita and Eugene.  Abraham is looking for companions, the more, the better.  A number of immediate threats plague Rick just when he thinks he can relax; group members deal with their past

Tonight’s The Walking Dead Season 4 episode 11 is going to be exciting, and you won’t want to miss it. So be sure to tune in for our live coverage of the new episode of The Walking Dead — tonight at 9PM EST! While you wait for our recap, hit the comments and let us know how know how excited your are for the mid-season premiere of TWD and what are you hoping will happen this season. Check out a sneak peek of The Walking Dead “Inmates” below! Don’t forget to come back at 9PM.

RECAP:  We see Glenn and Tara in an army vehicle being driven somewhere; they arrive and walkers are surrounded around the vehicle. Abraham comes out of the vehicle and beats the walkers up with a crowbar; he jams one of the walkers in the head and takes a gun to smash in the rest of their heads. Tara says she has never seen that before; Abraham says she does the same thing. Tara tells him he was smiling while doing it, Abraham says he is the luckiest guys in the world.

Carl is eating some cereal and laughs when Michonne comes in; Michonne says she wishes they had some soy milk to drink. Carl says when he drank it once a long time ago it made him sick; he would rather have powder milk and then mentions Judith’s formula and then stops talking. Michonne goes to see Rick and Rick thanks her for making Carl laughing; saying he almost forgot that sound. Rick says he can’t be his father and his best friend; Carl needs her. Michonne asks what the plan is; Michonne wonders if where they are now is home or a stop on the way. Rick says to stay here while they figure it all out; Michonne says she will go out for supplies with Carl. Rick offers to go too but Michonne tells him to stay back since he did pass out before. Rick goes to the front with them and sees them off; Rick then goes back inside and pushes the couch to the door. Rick goes upstairs and then lays in bed with a book. Michonne asks Carl if he found anything good in the house he was in; Carl says nope and shows him how she found some canned cheese. Michonne says he doesn’t seem fine at all, Carl says he’s tired; Michonne goes ahead and sprays the cheese in her mouth.

Michonne says she is sorry and mentions she’s not good with boys her age; they go up to another door and Michonee knocks on the door. Michonne says she had a three year-old son who found her extremely funny; the two then go into the house. They drop there bags at the front door and start to look around; Carl questions Michonne about her kid and life before. Michonne says she will answer one questions at a time after they clear the house, Rick is sleeping upstairs and hears voices coming from downstairs.

Rick looks for his gun and can’t find it; he hears the people walking upstairs and goes to the door, he sees a man walk into one of the rooms with a big gun; Rick then hides himself under the bed. A person walks in and starts looking around the room; Rick is in pain and is trying his best to contain it. The person then sits on the bed and forces more pain onto Rick, but he stays quiet. Michonne and Carl are in the house, Carl asks Michonne what her childs name was; Michonne says his name was Audry Anthony. Carl asks another question and Michonne tells him they have to clear another room; Carl then finishes a room and asks if there were any kids. Michonne says one was enough for her at the time; Carl goes and finds a giant painting. Carl asks Michonne how long it has been since her child died; Michonne says it happened after everything did. Carl ask if Rick knew, but Michonne tells him that she has told no one else but him. Carl says her secret is safe with her; Michonne says it isn’t a secret. Michonne opens up the painting and finds it covered in weird marks; she goes into a bathroom with her sword prepared to be drawn. She then enters a kids room and finds it empty; she lets out a sigh and then starts to look around. Michonne opens another door into a what would be a young girls room; inside are two walkers and a child waler in beds; in the corner is another child alker in a chair. Michonne gets out of the room and Carl comes by asking if everything is okay; Michonne says it’s all fine.

Carl questions if there was a baby in there and Michonne says it was a dog; Carl now mentions how he got to name Judith and says that maybe she and Michonnes child are somewhere together now. Michonne tells him they have to go back to Rick.

Rick is under the bed and is trying to slide out from underneath, but someone else comes up and he slides back under; The two men now start fighting each other for the room. One of the men are killed by being strangled to death and Rick watched it all happen; the guy now lays back down on the bed.

Glenn wakes up and sees the trees passing by his eyes; he gets up and Tara tells him not to move. Glenn asks where they are and Tara says that she has no idea, Glenn asks if they passed a bus; Tara says they did and that she says everyone inside of it was dead. Tara says it’s been three hours since they saw it; Glenn then asks the guys inside to stop the truck. They ignore him and he cracks the window in the back with a rifle, Abraham comes out and asks where the hell they are going; Abraham says that he needs to stick with him and that he would not last a night alone. Glenn says he will take his chances, Abraham says that the fate of the whole human race may depend on them; Abraham introduces himself and his friend Rosa and Eugene who is a scientist who knows what created this whole mess.

Glenn asks what happened, Eugene says it’s classified but Abraham says he has been talking to a lot of people in Washington on his phone about it; Glenn says he is sorry and keeps walking. Tara follows with him and says she will help him get back, Abraham says he is wasting his time and there is zero percent a chance he will ever find his wife alive or dead. Abraham says there is no reason for him to die too, Glenn puts down the bag and punches Abraham in the face and says his wife is alive; he will find her. Abraham jumps Glenn and the two start fighting; Glenn is being choked and Eugene notices a walker; Eugene takes a gun and a bunch of walkers start coming from the corn fields. Abraham tells Eugene to quit the gun fire and comes over to shoot the walkers; Glenn and Tara get guns from the back and help kill them two. Abraham notices a gas leak from the truck because of Eugene’s poor shooting skills.

Rick is trying to get out from under the bed while the guy is sleeping, he gets out and starts to get up slowly not to wake him; Rick runs into another room was one of the other guys comes up looking for the other two. Rick is trying to open the windows but has no luck, he then takes one of the trophies in a kids room for a weapon; the two guys go downstairs and Rick hides in a bathroom. He is seen by one of the other men and hits him in the head with a trophy; Rick then starts to strangle the guy until he is unconcious. Rick then takes the man’s gun.

Rick then finds and opens a window; he first opens the door a bit to not make it suspicious. Rick climbs out the window quietly and slowly lowers himself off the roof; he makes a little more sound than he wants to and hides himself waiting. No one comes and Rick makes his way to the front door.

Abraham is under the truck and trying to fix it, he starts talking about one of his experiences and asks why Eugene killed his truck; Rosa finds something on the ground and asks if it’s Glenn’s. Glenn just takes it and says sorry about their truck and starts walking back; Rosa says they have nothing else to do and starts to follow. Eugene says it is smarter to go with Glenn and that they can find another vehicle to go to Washington; the three now follow Glenn and Tara backwards.

Rick is listening on the porch as he whistles and eats; Rick notices Michonne and Carl walking back. Someone is getting attacked inside and Rick runs off to Carl and Michonne telling them to run; the three of them get away from the house.

Michonne, Carl and Rick are walking down the rail road; they notice a train cart saying that sanctuary is ahead and Rick says they should go.