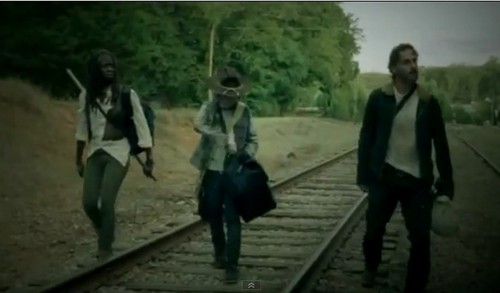 The Walking Dead continues to build the stakes, even as the survivors slowly drift back together after the destruction of the prison. After a decidedly slower and more focused episode in ‘After‘, we got back to the basics in ‘Inmates‘, where we rounded up the remaining survivors and focused on all our B-storylines.

One of the more heartbreaking and heartwarming moments of the episode is when Maggie clears out the crashed survivor bus from the prison, only to find out that Glenn’s actually not on the bus. I have to say, Lauren Cohan completely killed it in that moment – and although we know that Glenn survived, courtesy of spoiler-y preview videos, the honesty in that moment really hit home what these survivors are facing.

Of course, Glenn was the highlight of the episode [MORE GLENN!], marking a return to badass Glenn from Season 1 and 2, instead of whiny Glenn from Seasons 3 and 4. He rounds up weapons and supplies, finds Tara, and hulk smashes his way through the litany of walkers. And then, he decides to go after Maggie, just as she’s made it her top priority to find him. Unfortunately, just as the episode is ending, they end up getting cornered by a trio of survivors, otherwise known as Eugene, Rosita, and Abraham.

Now, fans of the comics will be plenty familiar with these characters, but rest assured, the show’s not pulling another Governor on us. While none of these new characters are people you’d want to be BFFs with, they’re not evil and they’re not out to kill everyone – we think. But from the previews we’ve seen so far, there’s a chance that Maggie’s and Glenn’s reunion comes soon. Will it come in the next episode? We’ve already seen that they’re not far apart, since both of them came into contact with the ‘Escaped Hitchhikers May Be Inmates’ sign, albeit at different times. But let’s hope that it’ll happen quick, especially if the rumors are true, and Maggie will be bidding adios by the end of this season.